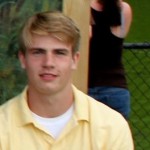 Each week we will have an interview with a new cutie on the prowl! This week he’s a stud, he’s hardworking, he’s your All-American heart throb, he’s AJ Carlson!

How do you like your tacos and what does it say about your personality?

I’m more of a chipotle burrito kind of guy…

I can serenade the beautiful women of Gettysburg College with the guitar.

When you’re texting someone and the conversation is definitely dying but you don’t want it to end, how do you keep it going?

Even if I don’t want it to die, I’ll usually let it die and text them later. There’s no point in forcing anything.

If you were a car, what kind and color would you be? Why?

Ford GT…fast, rare and best of all, American.  I always liked white with blue stripes.

Boxers or briefs? Why?

Boxers, who wants to be constricted with briefs?

She has to be intelligent, but being attractive doesn’t hurt either.

AJ was asked to complete the following sentences…

The craziest thing I’ve ever done is…My friend and I drove cross-country in one shot. It took us 50 hours.

Everyday I strive to…just enjoy it and make the most of it.

WORD ASSOCIATION: AJ received a series of words and was told to quickly respond with the first word that came to his mind upon hearing each word.

Why are you Gettysburg Great?

I’m a hard working guy who is fun to be around.