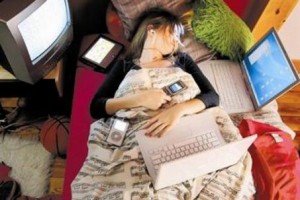 According to an article featured on CNN last week, rampant use of technology–and the over-use of stimulation that follows–may negatively impact teens’ health.

For young adults living in the current American society, it would be nearly impossible to avoid technology.

Teenagers can regularly be found sitting in front of computer and television screens, using their cell phones to text friends or listening to music on their iPods or MP3 players. Journalist Pat Etheridge’s feature for CNN, “Young People and Social Media: Docs Examine Pitfalls,” discusses the recent topic of ‘technology abuse.’ Etheridge, who specializes in children’s health and family issues, labels the current generation of young people the “Generation M2.” The “Generation M2” is defined as “highly tech-savvy children ages eight to 18, whose lives are immersed in electronic media.” Another term given to this generation’s technology-savvy teens is “The Millennial Teen.”

This generation is the first to not remember life before cellphones and the internet. People ages 18 to 34 are heavily dependent on the many forms of technology they possess. The internet education portal Onlineschools.com combined their research with that of the Common Sense Media and other organizations to develop with their own statistics regarding this issue. They reported that 94 percent of people between age 18 to 34 own a cellphone, 70 percent own a laptop, 69 percent own an iPod or another type of MP3 player and 23 percent own a personal tablet.

The overuse of technology has proved to be detrimental to young adults’ health, with common side effects including aggression, depression as well as drug abuse, self-image issues and even suicide. According to results from a Nielson Survey, the average teenager sends about 3,400 texts per month and over 100 texts every day. “Generation M2” spends about eight hours per day sitting in front of TV or computer screens, which amounts to more time than the average school day or the average amount of sleep every night for young adults.

The amount of technology teens use on a regular basis takes a toll on their academic performance as well. The 2012 Kaiser Family Foundation Study found a direct connection between technology use and poor academic performance. This study reported that about 21 percent of young people between ages eight to 18 consume about 16 hours of media each day. Of this group, 47 percent reported earning grades of ‘C’ or below in school. The New York Times featured an article explaining how technology-obsessed teenagers at Woodside High School in Redwood, California have become unhealthily distracted by their overindulgent use.

The article stated, “Researchers say the lure of these technologies, while it affects adults too, is particularly powerful for young people. The risk…is that developing brains can become more easily habituated than adult brains to constantly switching tasks – and less able to sustain attention.”

Michael Rich, an associate professor at Harvard Medical School and the executive director of the Center on Media and Child Health in Boston explained, “The worry is we’re raising a generation of kids in front of screens whose brains are going to be wired differently.”

Young adults’ excessive use of and dependence on technology is unhealthy and can be detrimental. The “Generation M2” and “The Millennial Teen” have become so accustomed to constantly checking their phones, sitting in front of their television or computer screens or listening to mainstream radio that it is difficult to imagine what they would do if they were to put aside their technological equipment for even just a couple of days. Even books, newspapers and magazines are beginning to find their way onto Kindles or apps on computers.

“Generation M2” needs to understand not only the importance of stepping away from technology occasionally, but also the harmful effects they may encounter if they do not.