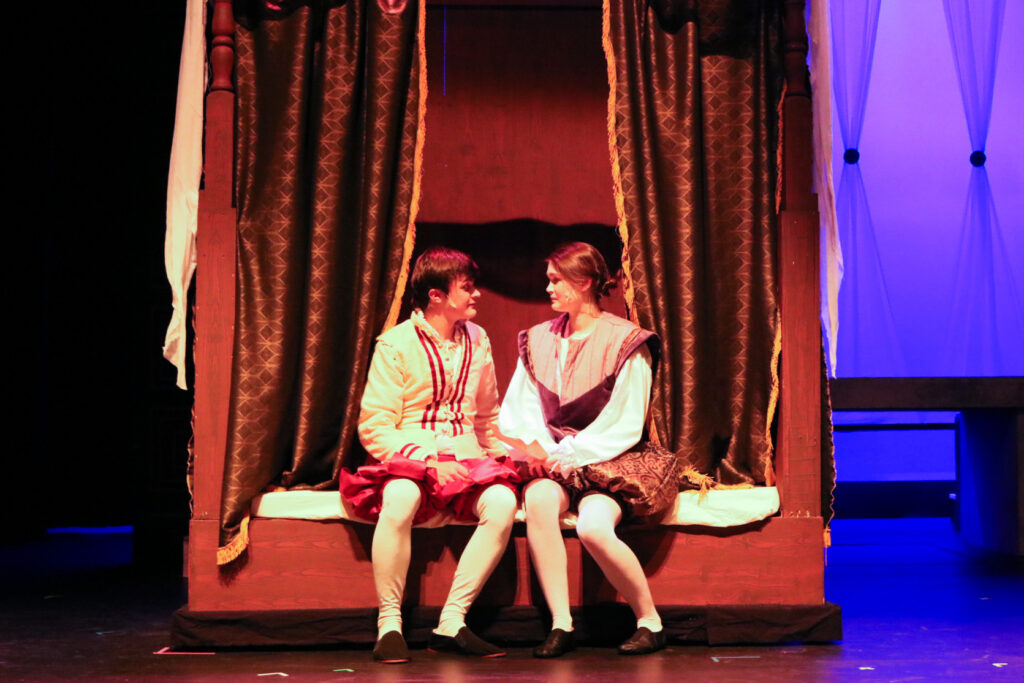 The play was presented by the Department of Theater Arts in collaboration with The Owl and Nightingale Players, and directed by Professor Christopher Kauffman ’92. “Shakespeare in Love” is a 2014 play adapted from the 1998 movie of the same name. The play was written not by Shakesphere, but by Lee Hall, who adapted the original movie written by Tom Stoppard and Marc Norman.

The play takes place in the sixteenth century and features famous playwright William Shakesphere (Blake Dudley ’23) as the main character.  Shakespeare, who goes by Will in the play, struggles writing the iconic “Romeo and Juliet,” leading him into a forbidden love affair with an actor, Viola De Lesseps (Laura Duffy ’23), who is pretending to be a man due to the law forbidding women from acting at the time.

Act One follows Shakesphere struggling to write a new play. He then goes to his friend, Kit Marlowe (Alex Sanchez ’23), for advice. While holding auditions with theater owner Henslowe (Roisin Daly ’23), he encounters Viola De Lesseps, who lands the part of Romeo. Viola is forced into an arranged marriage with her fiance Lord Wessex (Eric Lippe ’23), while simultaneously dressing up as a man in order to act, as it was illegal for a woman to do so. Viola and Will begin to like each other after meeting face-to-face at a ball. After an intimate kiss shared by Will and Viola during rehearsal, the two begin a relationship.

Other supporting characters include Queen Elizabeth I (Nicole Parisi ’23), and Richard Burbage (Ratul Pradhan ’25), the rival theater owner. Joining the cast for her first performance was canine Stella O’Neill, a dog/spot. Act Two involves Will and Viola navigating their unconventional relationship, while also dealing with problems in Will’s playwriting.

“Shakespeare in Love” is a comedy that keeps its audience entertained, intrigued, and laughing for its two-hour running time. On the Friday night performance I attended, the audience was consistently laughing at the quick-witted, ironic humor of the show. 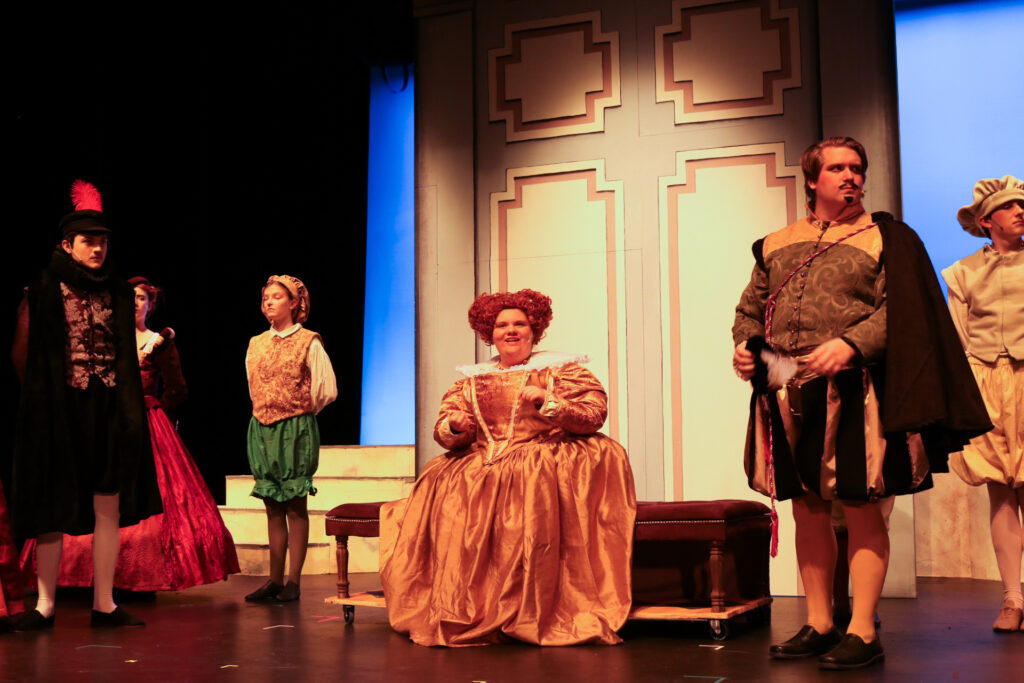 In the comedy, a tragic love story unfolds, acted masterfully by Dudley and Duffy. The audience seemed to uproar in laughter after scenes including Adam Doran ’25, who played Mr. Tilney, the Queen’s right hand man, and particularly from the humorous delivery of his lines.

I also enjoyed seeing the character development of Fennyman, played by Helen O’Neill ’23. This character follows a path of hatred of theater to a newfound love of theater.

The stage design was evidently well-planned, which I congratulate scenic designer and Associate Professor of Theatre Arts Eric Berninghausen for. Additionally, the costume design by Theatre Arts instructor, professional costumer, and stage hand Juls Buehrer fit the historical period and added flavor to the whole show.

During Thursday night’s opening performance, Stella the dog ran off the stage during the first act, prompting actor Pradhan to run after her. This moment may have captured the most laughs of the weekend.

Overall, “Shakespeare in Love” is a production that keeps the audience on its toes with its fiery humor, passionate acting, and engaging story.