Opinion: The Real Issue With “Tired of White Cis Men” 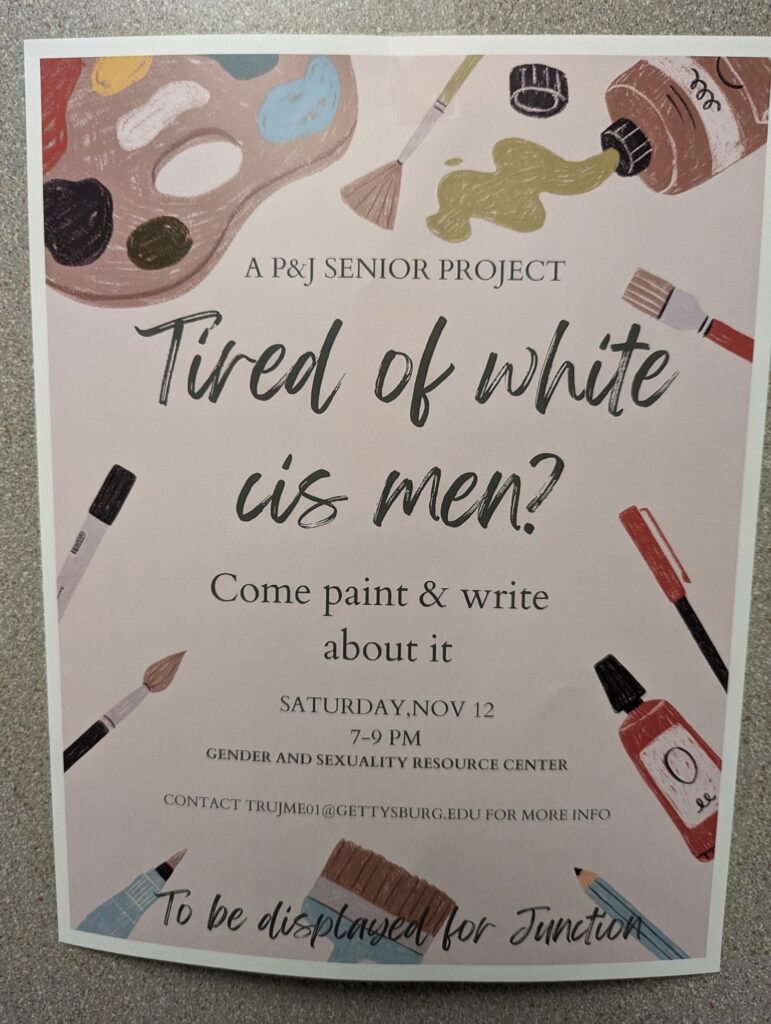 Flyer hung up in Glatfelter Hall for the “Tired of white cis men?” event before it was canceled (Photo provided).

Any moderately engaged member of this campus has heard of “the poster,” as it is known, and even more certainly has heard a plethora of opinions, either from friends, parents, or the national news cycle. While each has their views on whether the Peace & Justice Studies senior project poster is racist or acceptable, legitimate or deplorable, nobody has commented on the underlying message the poster sends for the organization listed as sponsoring it, the Gender and Sexuality Resource Center (GSRC), nor the effect that it has had on the reputation of the College as a whole.

While it is important to note that the poster and the event it promoted were not sponsored by the GSRC nor was it approved by the College, neither the College nor the GSRC has released any statement regarding the event. This lack of communication creates two significant issues.

Firstly, the College has been slandered in the national media with no attempt from the administration to absolve themselves. Fox News states that the event has merely been “postponed,” citing a statement from a spokesperson for the College. Said spokesperson, however, makes no mention that the event was not sanctioned by the College, not even going so far as to say that the poster violates the mission and goal of the College in developing a diverse and welcoming student body. Is this the best that they can do? Must I read Twitter posts bashing the College and the worth of a Gettysburg College degree without an ounce of communication from the Administration? Don’t believe me? Search “Gettysburg College” on Twitter or Google; any self-respecting member of this student body will be upset with how we are portrayed. The administration has allowed this without a single ounce of defense. Is this not important enough for even one of President Iuilano’s famous emails? It appears, even in an era of financial crisis for the College, that Administration will allow the Gettysburg name to be slandered, reduced, and minimized, and the student body will continue to be forced to infer and assume the role of the College instead of the Administration bucking up and stating it.

Secondly, the GSRC has released no statement to the student body absolving itself of participation in the event. The only effort made was a meek statement in a previous Gettysburgian article. This is incredibly frustrating. Students of all genders and sexualities should feel welcome in the GSRC and should be able to equally benefit from the important resources they provide. However, by not denouncing the event and the poster, they appear to suggest that white cis-gendered men are not privy to their resources. Sexuality transcends race and gender, and gender itself transcends race. Why I ask, has the GSRC not stated that members of all races, genders, and sexualities are welcome in the Center and can receive the support they need from the staff there? In light of Gettysburg’s recent detestable ranking as #20 on Princeton Review’s “Top 25 Least-LGBTQ+ Friendly Schools,” one would hope that the GSRC would make every effort possible to extend their services to every member of the student body, regardless of race, gender, or sexuality. Is clarity and a concrete position too much to ask for? One’s race and gender, including white and cisgender, should not preclude their access to GSRC resources, and the GSRC has a responsibility to state this definitively.

While the GSRC staff is most likely not to blame for the silence, it does not make up for the fact that we, the student body, have been left in the dark, relying on national media instead of our Administration for information, forced to make assumptions about the actual stance of the College. If you read this article and see any discrepancies in the information or disagree with any statements, understand this as my point: the lack of any clarity leads to dangerous speculation, speculation that can tarnish the reputation of the College and its resources, with or without factual basis. This student body deserves to be informed and deserves a transparent and coherent Administration.