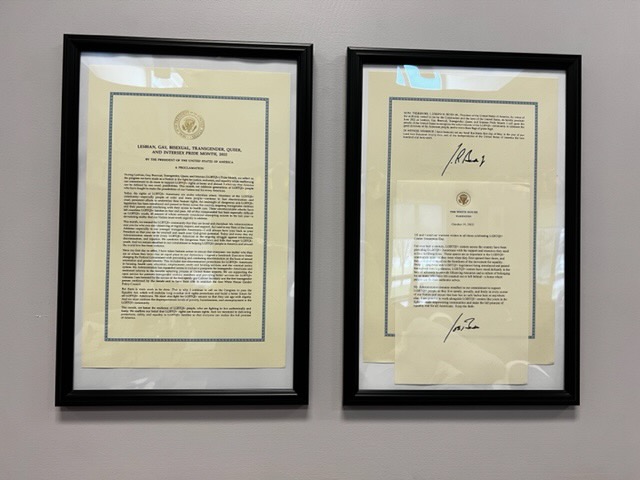 Biden’s letter hanging in the GSRC. (Photo courtesy of AJ Del Gaudio, Director of the Gender and Sexuality Resource Center)

On Oct. 19, the Gender and Sexuality Resource Center (GSRC) received a letter from President Biden, congratulating and thanking them for the work they do to promote and protect LGBTQ+ rights on campus. The letter also acknowledged the hardships faced by LGBTQ+ people and reaffirms the Biden Administration’s commitment to the group.

In 2014, the Obama Administration began to send letters to university LGBTQ+ organizations annually, recognizing LGBTQ+ Center Awareness Day. This practice ceased under the Trump Administration, but the Biden Administration has since restarted the practice.

The letter opens with Biden stating “Jill and I send our warmest wishes to all those celebrating LGBTQ+ Center Awareness Day.”

Biden continues, stating that LGBTQ+ centers act as “a home where people can be their authentic selves.”

“My administration remains steadfast in our commitment to support LGBTQ+ people as they live openly, proudly, and freely in every corner of our nation,” said Biden

Biden concluded the letter by stating his gratefulness for working alongside LGBTQ+ centers and encouraging the staff of the GSRC to “keep the faith.”

GSRC Director AJ Del Gaudio said they believe that the letter is an important recognition of the LGBTQ+ community.

Del Gaudio stated, “the first year Obama sent them, I was volunteering at the LGBTQ+ Center at my undergraduate university and we received one. Biden continued the tradition this year and sent us the letter, to thank us for the work we do at the Gender and Sexuality Resource Center.”

Brooke Ashfield ‘23, a student program coordinator at the GSRC, said “the recognition is important. President Biden bringing this back and including our office is a small step for recognizing the struggles that LGBTQ+ students are facing and proves the significance of creating and supporting safe spaces like this at all schools.”

The letter is currently framed and displayed in the Gender and Sexuality Resource Center.