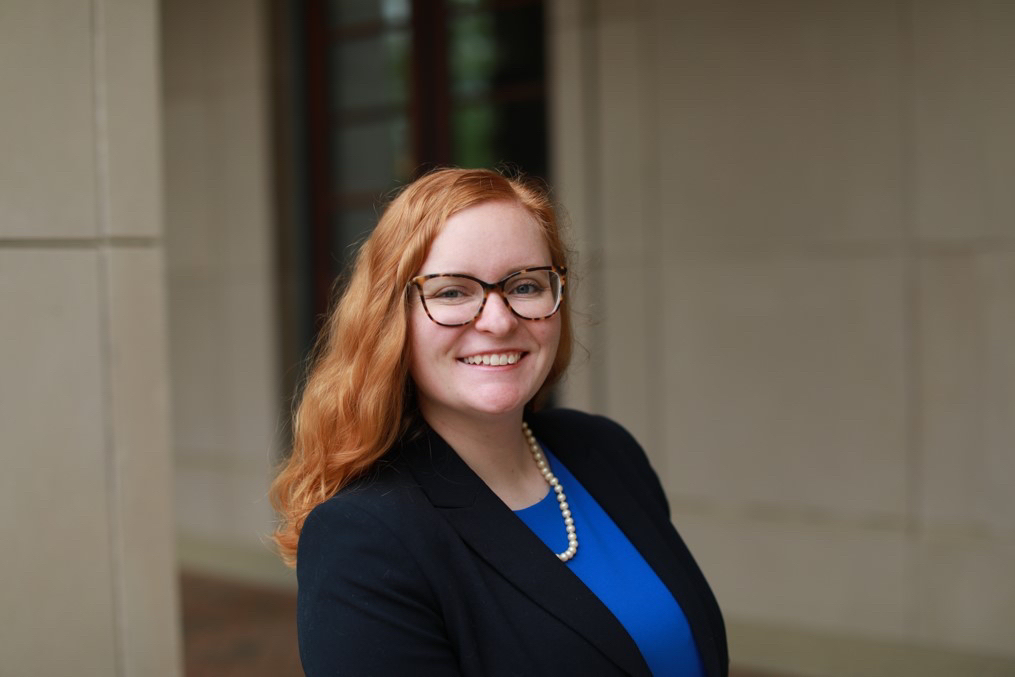 Alumna Abigail (Abby) Hauer ’21 is making a name for herself following her graduation fromGettysburg College.

She is currently enrolled at the University of Virginia (UVA) School of Law and plans to work in the field of public interest law after her graduation in 2024. She is half-way through her law program and continues to work hard to achieve her goals.

Getting into UVA Law, one of the most prestigious law schools in the country, was no small feat. Hauer said much of the credit for this accomplishment goes to the support and encouragement she has received from her family. Other factors included Hauer’s time spent at Gettysburg that guided her toward her current path.

Upon her arrival at Gettysburg, Hauer was quick to immerse herself in many different opportunities. She came in knowing she wanted to do something with economics, and after getting a few economics courses under her belt, she declared herself a mathematical economics and public policy double major. She further declared a political science and peace and justice studies double minor. With both a double major and a double minor, Hauer juggled a busy schedule.

Still, she managed to find a way to balance out her busy academic life with extracurriculars too. Hauer was active with the Eisenhower Institute (EI). She recounted how EI broadened her perspectives by exposing her to real-world issues and helping her learn how to discuss, analyze and develop policies to help bring about positive change.

Hauer was also involved with the co-ed community service fraternity, Alpha Phi Omega, and was a member of the Student Senate. Hauer said that together, all of these activities made her a more well-rounded student and person.

During her time at Gettysburg, Hauer cultivated close relationships with her professors, gaining more guidance for her potential career. She was especially close with Public Policy Associate Professor Anne Douds.

Research projects that Hauer and Douds conducted alongside each other inspired Hauer to pursue a career in public policy.

She was also close with Political Science Associate Professor Scott Boddery, who gave Hauer the guidance she needed in applying to law school and he was a great support system for her.

Hauer emphasized how impactful her economics classes were too, especially those where she was able to engage in research. A lot of the research she focused on had to do with college crimes and the effects they have on both the students and the school. She examined how campus sexual assault affects retention rates at institutions, and did her senior thesis paper on the impact of sexual assault on college . Hauer has continued to delve deeper into the issue of sexual violence at UVA Law as well.

Hauer has continued to focus her work on the important issue of sexual violence. She interned last summer with the United States Coast Guard Special Victims’ Counsel Program, where she researched gender-based violence and child exploitation.

She continues to excel and be just as involved here as she was at Gettysburg. She is concentrating on Public Interest Law, which only about 10% of her class is going into. Because it is a niche field, she is very involved in fundraising and promoting those students who have dedicated themselves to this area of public service law.

She also serves as an Executive Editor for the Virginia Journal of Social Policy & the Law. Also, Hauer is a legal writing fellow, where she helps first year law students develop their legal research and writing skills.

Since last November, she has been performing Pro Bono work (free legal aid) for the Domestic Violence Project, an independent organization run by UVA students. As a member of the Domestic Violence Project (DVP), Hauer and other students are provided with evidence from a domestic violence case, including body-cam footage, recordings of 911 calls, photos, etc. After reviewing this evidence, they write up a case summary for the prosecuting attorney who then takes it to trial.

Hauer’s work at the DVP has had a huge impact on her. She understands how critical it is for every victim to feel comfortable speaking out and sharing their story. It is Hauer’s ultimate mission to ensure these victims obtain the best possible outcome and to make them feel safe and heard.

Hauer knows she wants to pursue work in the field of sexual and domestic violence through one of two pathways she is considering taking. She could either begin with a clerkship, which would then lead to local prosecution work, specifically, special victim’s unit prosecution. From there she’d hope to end up in a U.S. Attorney’s Office.

Alternatively, Hauer could take the federal route, where she would start out clerking and thenwork within the Department of Justice. Either way, she knows she eventually wants to be working in a U.S. Attorney’s Office.

Hauer is a shining example within the Gettysburg College alumni community. Along with the support of family, friends and her own personal drive, Gettysburg College’s education and faculty have also played a key role in leading Hauer to where she is now. Abby Hauer is the epitome of “Doing Great Work” and is making a difference through her continued education and drive.