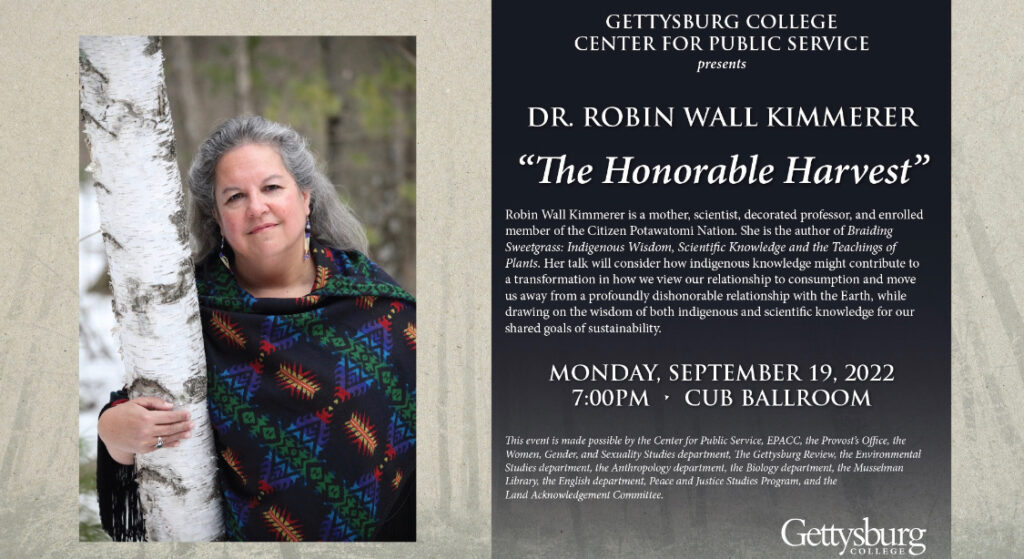 Poster from “The Honorable Harvest” event

On Monday, author Robin Wall Kimmerer visited Gettysburg College to present a lecture entitled, “The Honorable Harvest: What does the Earth ask of us?” on her bestselling book Braiding Sweetgrass: Indigenous Wisdom, Scientific Knowledge, and the Teachings of Plants.

After reading the statement Monani said, “A land acknowledgment statement only becomes meaningful when it leads to action.”

“One of the forms it takes is bringing indigenous issues to the forefront of…curriculum development,” she continued.

Monani finished her remarks by thanking Director of the Center for Public Service Jeff Rioux, in addition to the academic departments who assisted with bringing Kimmerer to campus.

Following Monani’s speech, Katie Mercer ‘21 shared background information about Kimmerer and spoke about her own personal connection with Kimmer.

Mercer said, “The power of place and the generosity of the land was something I could never fully verbalize until I read [Kimmerer’s] book.”

Following her brief introduction, Mercer welcomed Kimmerer to the stage.

Kimmerer began her lecture with a greeting in the Potowanami language. She emphasized the importance of gratitude to the Potowanami Nation and asked her audience to remember their reasons for gratitude.

Kimmerer also shared her own reasons for gratitude. “I want to give gratitude for the warm welcome I’ve received here at Gettysburg. I really appreciate your generosity in sharing your ideas,” said Kimmerer.

She then provided an explanation of the existence of shared territory between the Potowanami Nation and the Haudenosaunee Nations. She presented a slideshow image that showed the treaty agreement between the two nations about taking care of their shared land.

Continuing with her discussion of gratitude, Kimmerer said, “I would ask you to think for a minute that despite the fact that every day, every one of us is showered in gifts from the Earth… we find ourselves embedded in social institutions…that are always asking ‘more.’”

Next, Kimmerer moved to a discussion of sustainability, offering a perspective provided by Potowanami elders.

“Look at those definitions. They’re all about how we can continue to take from the future. They don’t ask ‘what does the Earth ask of us?’”

Kimmerer then explained the name of her booking, Braiding Sweetgrass. She shared that the act of braiding sweetgrass “is a way to say to Mother Earth, ‘we care about you.’”

She then discussed her personal experience with beginning her education in botany.

“When I went off to college, I knew I wanted to be a poet or a botanist. I chose botany,” she said. “I knew I would be one of the only women, and I would most certainly be the only Native student on-campus.”

She also shared a story from her book about her first day in forestry school, where she realized that her indigenous perspective was not valued by the academic community.

“My first day in higher education was not unlike my grandfather’s first day at boarding school in Carlisle,” she said, showing an image of a group of Native American students at the Carlisle Indian School. “His way of knowing was not welcome there, and mine wasn’t either.”

Kimmerer explained that throughout her botany education, she learned that “Land was synonymous with natural resources.”

“It means raw materials that we can extract for things we want for our species,” she continued. “Land is a thing. Land is property, and therefore, land is capital.”

As a professor, Kimmerer now teaches about “the indigenous science of land stewardship” which she was denied as a student.

Describing her research, Kimmerer said, “If you map biodiversity hotspots, and then you map indigenous languages on top of that, it is almost a one-to-one match.”

For this reason, Kimmerer noted the importance of studying diverse perspectives on the environment.

“Most of our universities only teach through one lens, the lens of Western science,” said Kimmerer.

Next, Kimmerer posed a question to the audience, “How do we reciprocate the gifts of the Earth?”

She then provided her answer to the question through a strategy called “The Honorable Harvest,” which included the following suggestions for maintaining biodiversity:

Kimmerer further explained, “I would submit to you that had we been practicing The Honorable Harvest for the last fifty years, we would not have to be afraid of our own atmosphere.”

Kimmerer concluded her lecture with a call to action to the audience, asking them to think about how to show gratitude to the Earth.

“Our job as human people is to seek justice, justice not only for ourselves, but justice for all creation.”