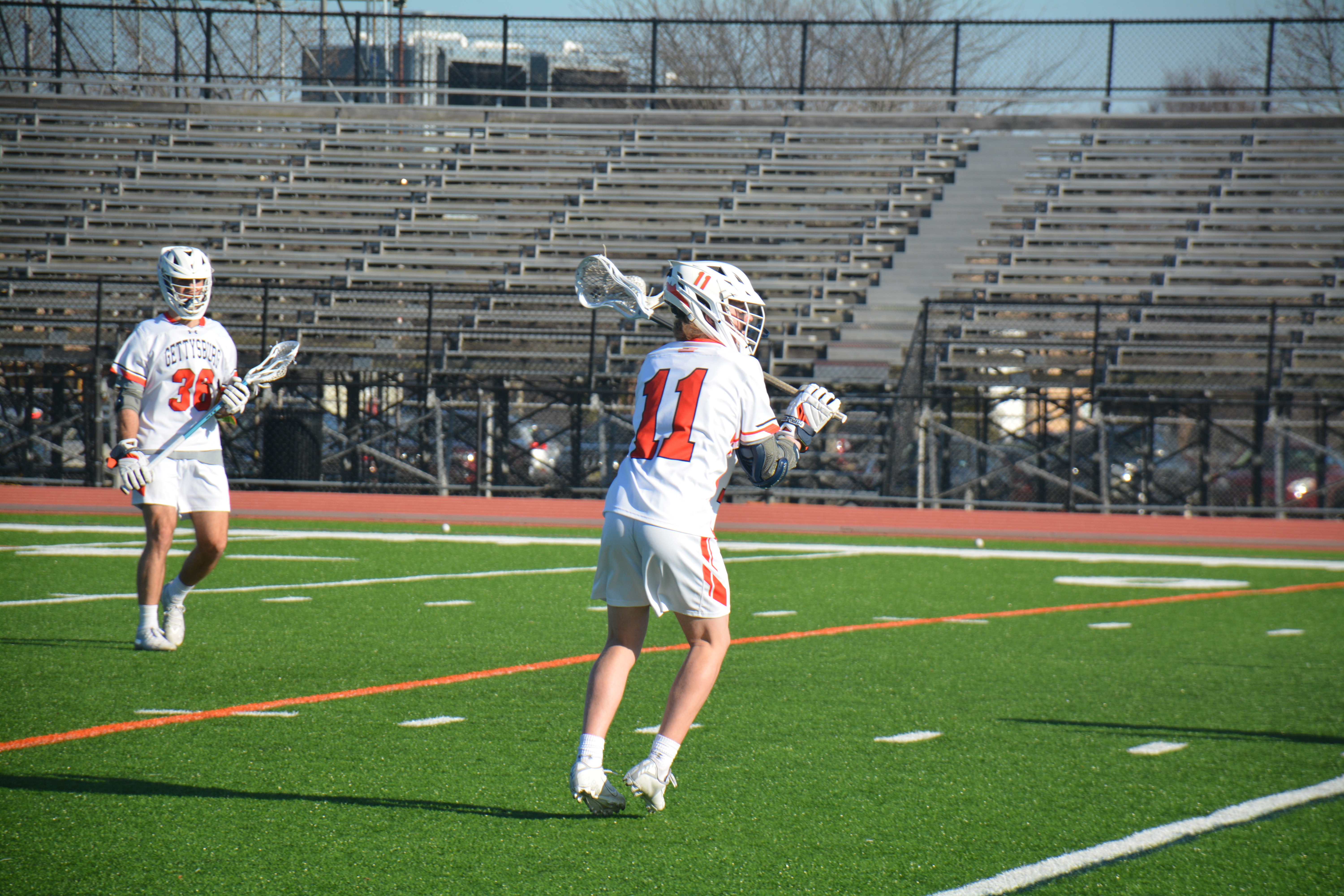 Gettysburg’s men lacrosse fell to number six York College in a close game by a score of 9-8 on Saturday, April 16 during their Senior Day celebration.

Griffin Gallagher ’22 scored the first goal of the game in the opening minutes of the first quarter. Quinton Mather ’24 scored around the 10-minute mark, giving the Bullets a quick 2-0 lead. Right after, though, Ben Mayer from York College netted York’s first goal, assisted by Jack Grayson. A minute later Spencer Knife ’22 put the Bullets on the board again to expand their lead to 3-1. However, Mayer followed up with his second consecutive goal with two minutes left of the quarter to keep York within one.

To start the second quarter, York quickly tied the game up 3-3. After about six minutes, Mather lit up the field and scored twice, each assisted by George Raymond ’23 and Kieran Ward ’22, respectively. Knife netted the last goal of the half unassisted, giving the Bullets a comfortable 6-3 lead going into halftime.

After the break, York College scored four unanswered goals to give themselves their first lead of the game, up 7-6. Two of the goals were scored by Mayer and the third goal was shot by Ames Clark and assisted by Eric Ranck. Jarrod Marenger scored the fourth goal. The Bullets trailed York by one goal going into the fourth quarter, their quiet third quarter sapping all momentum from the squad.

At the eight-minute mark of the fourth quarter, the Bullets scored two goals to reclaim the lead. Raymond netted the first, assisted by Junior Connor Koch ’23. Mather then scored his fourth goal of the game, assisted by Ward. York responded right away, Marenger scoring unassisted with six minutes left to tie the score 8-8. With just two minutes left, Will Harnick of York found the back of the net with a crucial goal, giving York the tight 9-8 lead. The Bullets did not have enough time to score again, ultimately giving York the win.

Even with the tough loss, before the game the Bullets congratulated their 15 seniors on four seasons well done during their senior day celebration.

“Shoutout to our amazing senior class,” defensemen Andy Marquet ’25 said. “They’ve been a tremendous group of role model teammates and competitors. I speak for the team when I say we will miss them dearly.”

This week the team has been ranked in spot 17 in the USILA Division III Poll. Their overall record this season is 9-5 and 4-1 in the Centennial Conference. The Bullets won games against   Haverford College, Franklin and Marshall College, Washington College, and McDaniel College, and only lost against Swarthmore College.

Gettysburg is ranked second in the Centennial Conference 2022 standings. Dickinson College claims first place with an undefeated record of 6-0. The Bullets remaining regular-season games are against Dickinson College, Muhlenberg College, and Ursinus College, all conference opponents and paramount games.

“We have come very far this season,” Marquet ’25 said. “For the remainder of the season we need to continue to work hard and play with a lot of energy. We have a tough conference schedule remaining and will have to work hard to put ourselves in positions to win.”

In a Centennial Conference showdown, Gettysburg will be going head-to-head against number nine Dickinson on Wednesday, April 20th at 4:00 PM at Dickinson College. Fans can watch the game from the live stream on the gettysburgsports.com website. The last men’s lacrosse home game of the season is April 24th at 1:00 PM at Shirk Field at Musselman Stadium.