Home » Opinions » A Year of Being “Boulder Strong”

A Year of Being “Boulder Strong” 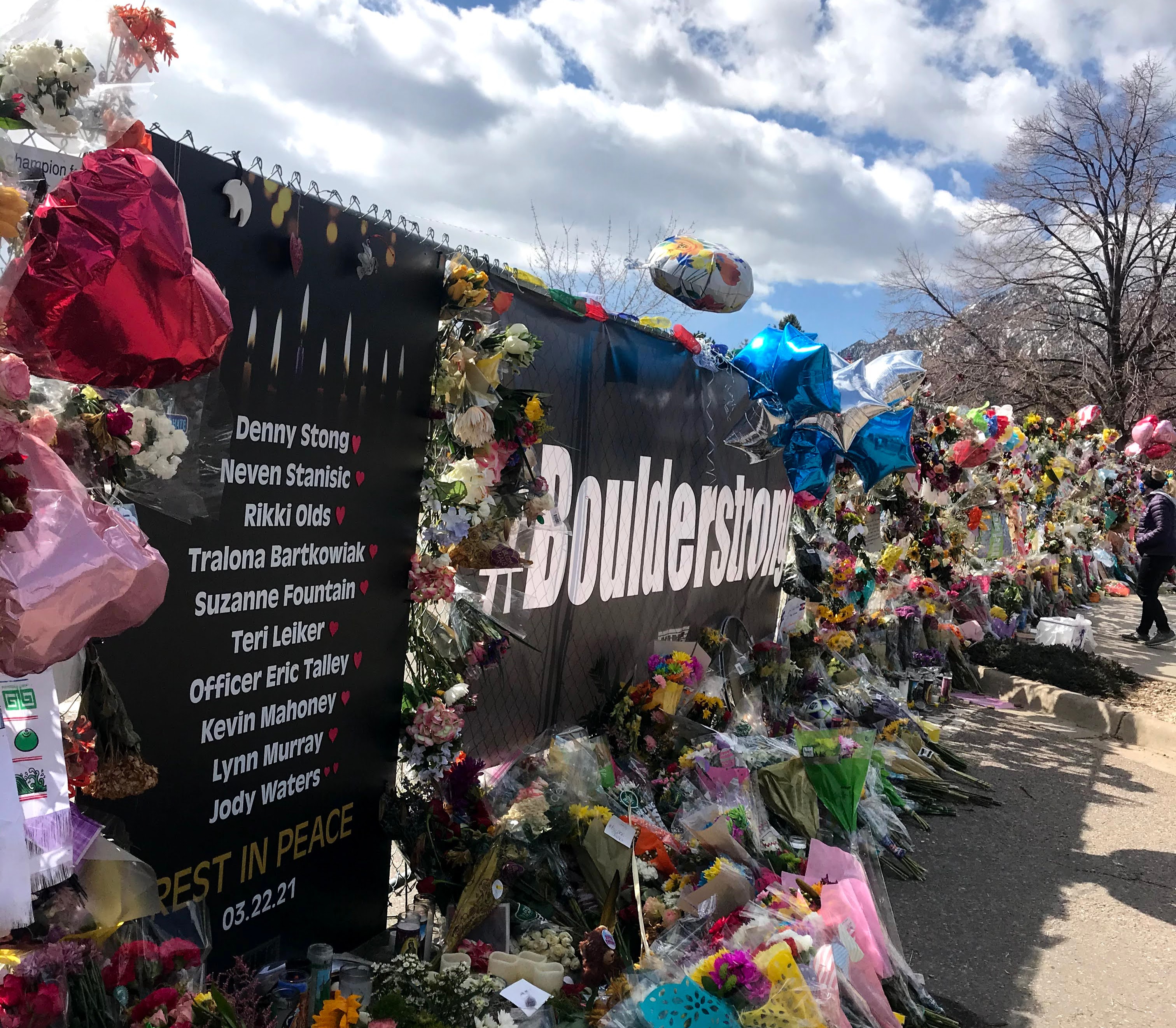 The memorial outside of King Soopers in Boulder, March 2021 (Photo courtesy of Emily Dalgleish)

In high school, the King Soopers grocery store was home base. It was where the upperclassmen would drive me to get snacks before marching band rehearsal every week my freshman year. It was where we went to get Starbucks after late-night studying. It was where we took my friend to buy a lottery ticket to celebrate her eighteenth birthday. It was where we bought supplies for our walkout for gun safety reform in 2018 after the Parkland shooting. Staff was not only accepting of having teenagers roam their aisles, but welcoming. King Soopers was always safe.

A year ago today, 10 people were shot and killed in our King Soopers. Tralona Bartkowiak, Suzanne Fountain, Teri Leiker, Kevin Mahoney, Lynn Murray, Rikki Olds, Neven Stanisic, Denny Stong, Eric Talley, and Jody Waters. A tragedy both unthinkable and all too common. Boulder mourned the loss of these community members, the loss of a place that had been a reliable staple, and the sense of security that we had once felt.

I flew home from Pennsylvania, feeling a need to be in my hometown and with my family during this devastation. I double-masked and went to the vigil in my high school parking lot. Being surrounded by that intensity of group grief was overwhelming, but it was comforting not to be isolated in those feelings. We remembered the victims but also talked about the necessity for action. I was enraged that after decades of mass shootings, nothing had changed, and the violence crept into my home. I was enraged that this shooting would probably not lead to reform. That these deaths would have no impact on the people in power.

A month ago, the King Soopers reopened. After a multimillion-dollar renovation, it no longer resembles what it did. New look! Same great products! It has a glorious window storefront (and an armed security guard at all times). The layout is fresh (with multiple cameras in every aisle that beep when you come into frame). Friends and family tell me that it is trying so hard to be normal that it feels off.  New walls do not hide the memory of a place.

Of course, a community must heal and must move on. However, resilience is not just constructing a shiny new building, it is using grief for action. Moving on without change is not healing, it’s forgetting. If a new building that looks entirely different is intended to help the community erase the tragedy, then we are failing those who lost their lives and those who have lost their loved ones to gun violence.

The Colorado legislature did pass a series of gun safety reform legislation following the King Soopers shooting: expanding background checks, creating the Office of Gun Violence Prevention, and lifting the ban on localities having stricter gun legislation than the state laws. I am glad this enormous loss led to some legislative change. It should not have taken this enormous loss to lead to some legislative change.

These are important steps towards gun violence prevention, but it is not enough. This problem is a national problem. In November last year, there was a shooting at Oxford High School where four students were killed and seven were injured. Afterward, Congress proposed various gun safety legislation which Senate Republicans blocked. We must vote out “leaders” who refuse to support bills that would save lives, who are unaffected by these preventable deaths. We cannot make lasting national change until that happens.

Today, my hometown and I are thinking about the ten people we lost. We are thinking about what has changed since then, and what progress still must be made. A year later, Boulder is strong, but no community should have to be this strong.

Emily Dalgleish ‘22 is the Opinions Editor for The Gettysbugian. She is from Boulder, Colorado, and is majoring in Political Science with a minor in Spanish. On campus, she is president of College Democrats, recruitment chair for the women’s club rugby team, and a tour guide with Admissions. Emily loves spending time outside, listening to podcasts, and road tripping.