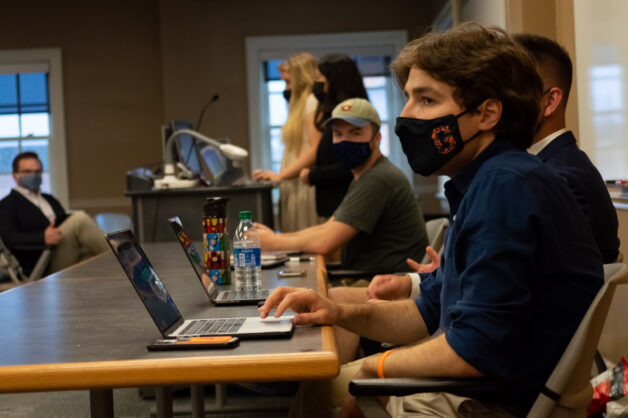 The Dec. 6 Student Senate meeting involved Danielle Phillips sharing of the College’s future plans for off-campus housing, Guest Speaker Ivana Lopez-Espinosa ’19, and announcements from the Information Technology department regarding the future of G-Tech.

President Sydney Quan ’22 announced that vice president applications would be coming out after the meeting. Last week’s impeachment proceedings resulted in the removal of former Vice President Colin Hughes ’23 from the executive board. The Senate intends to fill the position by their next meeting, which would be during next semester. The selection for the position would be a strategic, month-long process. In the interim, Treasurer Connor Heath ’23 will take the responsibilities of the vice president.

At the start of the meeting, Heath announced that the current amount of money spent was $51,723.43, which was updated to $66,531.43 after four budget requests, listed below:

Heath also announced that members should come to the Budget Management Committee’s meetings to hear about financial organization for next semester.

As referenced in the above budget requests, The Lost Keys a cappella group announced their end of semester concert, which is 7–8 p.m. in the Junction this Friday. The group will have a raffle and hope to see a large group there.

Director of Student Activities and Greek Life Jon Allen wished all attendees the best of luck in their finals, stating that it was “really exciting to see the Senate do really great things this semester.”

Ratul Pradhan ’25 announced that he and other Conservatory students were planning to start a Listeners and Performers Club, which would be focused on creating a community of pop-up social events with opportunities to showcase and listen to diverse music. The group is planning on starting up next semester, gearing their activities “toward people who appreciate live music [and want] to come together.”

Director of Residential & First-Year Programs Danielle Phillips, came to the meeting to update the student body on the future of off-campus housing at the College. She clarified that the Office will “need student engagement as we move forward” and provided some data regarding the enrollment trend. She clarified that enrollment has informed the College’s housing decisions, and it has been trending downward for the last ten years.

According to Phillips, because there are less enrolled students on campus and this trend is expected to continue; the College is expected to require fewer residential spaces. This means that the Office will need to stop renewing some of the leases they currently hold and examine their currently owned property to see if it can possibly be repurposed. Ultimately, the goal is to house all students on-campus.

Phillips reviewed the Residency Requirement, stating that students are required to live on campus all four years as a “key part of the liberal arts education.” The goal of this residential situation is to promote community and learning among students.

To conclude, Phillips warned students not to sign leases until approved through the College’s established process of application to live off-campus. Residence Life will examine exceptions on a case-by-case basis. The Department intends to send an email outlining this plan to all students and parents. There will be an open forum in January discussion regarding how the College might assist in transition to all students on campus.

The Senate next introduced Gettysburg alum Ivana Lopez-Espinosa ’19, who served as a senator during her senior year as well on Student Senate. Lopez-Espinosa announced that she would be discussing student power and how students can use their voices to advocate for change.

Espinosa started with some personal background. She is a queer Mexican woman, “semi-raised” Gettysburg (partially raised in Frederick, MD) who graduated in 2019 from Gettysburg College with a sociology major and a music minor before going on to the University of Michigan to earn her Master’s Degree in Higher Education with a focus in Diversity and Social Justice. She was involved in many different organizations while at Gettysburg, including La Casa de la Cultura, the Office of Diversity and Inclusion, the Bias Awareness Resource Committee, IDEA Council, the Campus Climate Study implementation group, LASA, BSU, MSA, and the Painted Turtle Farm. She was also the recipient of the Digital Scholarship Summer Fellowship Project.

To continue into the topic of student power, Espinosa referenced her personal experiences. Her experience as an undocumented and DACA-beneficiary Mexican woman was difficult in a “white, conservative location” as counselors could not understand her experience and passions. Her participation in organizations at the College, particularly those who emphasized understanding barriers within higher education, made her recognize the importance of understanding one’s surroundings in collaborative settings.

She emphasized that students have power both while enrolled and after becoming alumni, as they “are helping build community to build a background on new individuals and new cultures as well as [their] passions.” She encouraged students to recognize the community they are engaging with and listen to their colleagues to “drive institutional change.” By considering the barriers that are being “posed and uplifted” while completing major Senate projects such as overhauling the Constitution, the Senate will be able to better “help communities thrive.”

On the topic of using one’s voice to achieve student power, Espinosa emphasized that Senate members already possess power in their voting responsibilities. She encouraged them to actively “recognize [their] power and privilege” in relation to how it affects their ability to access different elements of the institution.

Based on her experience of “talking to different faculty and staff,” she stated that there are many opportunities to “really challenge the systems of power.” To conclude, Espinosa referenced her earlier point of the importance of listening to one’s surroundings, stating that “you can’t be an ally with people who don’t want to be allies” when trying to advocate or implement change.

Espinosa next opened up the floor for questions. Parliamentarian Alexis Jones ‘24 asked Espinosa how she countered limitations in policy advocacy. Espinosa responded that success “can happen in different ways,” emphasizing the importance of working across groups to implement change. If nothing else, the experience “means collecting experiences of those willing to share”, and advocates can build their knowledge base by “finding the root of the barriers”.

To close, Espinosa thanked everyone for their time and for the opportunity to speak. Quan thanked Inclusion Officer Alexandros Economou-Garcia ’22 for putting the series together and extended her thanks to Espinosa as well for her time.

The IT Department also spoke in the meeting. Rodney Tosten, the Vice President for IT first mentioned the virtual J-Term available for students. There will be about 30 sessions, each about an hour long, and focused on specific skills. Students are encouraged to “jump in and sign up,” as the sessions are free and “something the College wants to do for you.” The J-Term provides a distinctive opportunity to share with other students as well. New genres, such as Excel skills, were introduced as well. Students must register by Dec. 21.

Tosten also introduced Gavin Foster, the Associate Vice President for IT, and Thomas Franza, the Director of Infrastructure and Computing, both of whom were “happy to chat” about concerns regarding G-Tech. After former Computer Support Specialist Marc Crouse’s departure from the College for a promotion to another institution, Tosten announced that Deployment Coordinator Chris Bookhultz “will be helping us to ensure that G-Tech is moving along for the rest of the semester.”

Before moving forward, he emphasized the need to identify technology-based student needs. Tosten opened the floor for questions, some of which included queries regarding if G-Tech could expand opportunities for students to work with technology.

G-Tech will continue to remain open for hours for the sake of providing support during finals week, but IT strongly encourages students to schedule appointments for technology repairs.

Quan thanked everyone for a “tumultuous, but good semester” to conclude the meeting. She expressed that she hopes that “it hasn’t been lost on all of you that we can still do good work next semester.” She emphasized her gratitude for students’ hard work and taking care of the organization. She wished everyone a successful finals week, stating that “we all need to be rejuvenated.” Quan hopes that next semester, the group can continue doing educational, experiential, and progressive work.