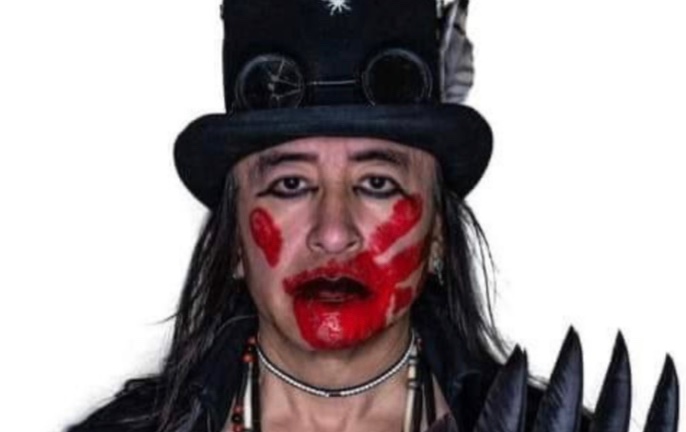 On Monday, Nov. 15 Students for Indigenous Awareness, the Office of Multicultural Engagement (OME), the Center for Public Service (CPS), and Students Against Sexual Assault kicked off their Native American Heritage Month Speaker Series in Mara Auditorium at 5:00 p.m.

Fast Horse began with a traditional Lakhota greeting, then gave background on his family, his name, and his childhood on the Pine Ridge Indian Reservation in South Dakota.

He then burned sweetgrass for the audience, explaining the difference between it, tobacco, sage, and cedar, showing each to the audience. After this, he shared a song.

“I’m very happy that we’ve had this opportunity to share and create right now this sacred space and to bring it all together,” he said.

He began to give a history of the Lakhota tribe and explained the importance of names to Native American people.

“When you give your name away, you give your power away,” he said. “As Lakhota people, we don’t like to use people’s names, so we have [these] kinship terms that we use.”

He showed the audience his card with the enrollment number proving he is Native American.

“As American Indians, we’re the only people to have to prove that we’re American Indians,” he said. “[This country] sees us as not human, but savages, and the US says ‘the savages.’ referring to us.”

He continued, “We’re the first people, the original people of this country, yet we have to show the U.S. government either through lineage or through…blood quantum.”

To put things in perspective, he explained how they became citizens of the United States in 1924 and in 1978 could practice their religion freely.

“I’m so glad you are here because what we’re doing right now is expanding consciousness,” he said. “The more you know, the more you can be a pebble in a still pond that creates waves, and with your club that you have, the Students for Indigenous Awareness, I thank you for that.”

He acknowledged some of the most important issues facing reservations, especially food insecurity and the missing and murdered Indigenous women (MMIW). 7,000 Native American women disappeared in 2018. He also expressed that the life expectancy of a Naive American man is 48 and for a Native American woman is 52.

There was time for question and answer at the end and Fast Horse shared stories from being a teacher and of life on the reservation. He ended with another song.

“Like I said, in Lakhota there are no words for goodbye,” he said, then teaching the audience to say, “Tókša akhé” which means “When we see each other, we will speak.”

Katelyn (Katie) Oglesby '23 serves as the Magazine Editor for The Gettysburgian. She has previously served as News Editor, Assistant News Editor, and staff writer. She is an English with a Writing Concentration and Political Science double major hailing from San Diego, CA but living in rural North Carolina. She is also New Member Chair for Alpha Phi Omega, a staff editor and contributor for the Mercury Literary Magazine, and the humanities field aide for the Gettysburg College Headquarters academic journal. She can usually be found perusing the books in the Musselman Library browsing room.