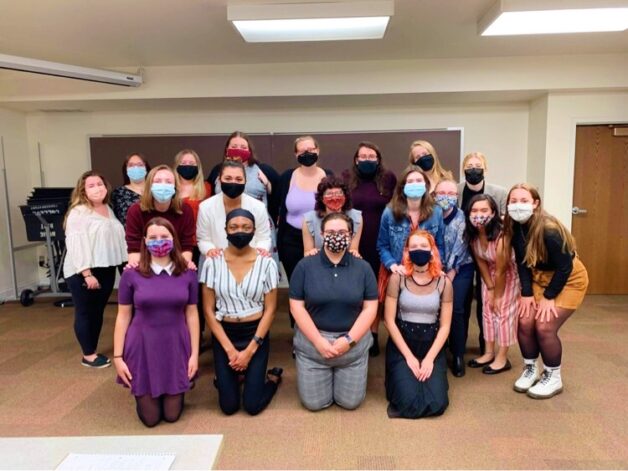 Sigma Alpha Iota (SAI) is an international fraternity of music for women and a self-described philanthropic organization that focuses on raising money to spread awareness of and accessibility to music all over the nation, while also creating a supportive network where women in music are celebrated. The Epsilon Beta chapter here at Gettysburg College fundraises, finances, and hosts social events in support of SAI members and women in music.

Much of SAI’s philanthropic work is done through its fundraising for various national projects. SAI supports the Bold Notes program, which helps provide visually impaired musicians with more accessible resources such as large-print music sheets. They also host the People-to-People project, which provides material assistance to disadvantaged individuals, schools, and organizations all around the world, and use their funding to put on the Inter-American Music Awards, a triennial musical composition competition open to composers of all ages from North, Central, and South America.

Each year, the Epsilon Beta chapter of the fraternity organizes a themed concert series at Gettysburg. This year, the series is titled “Music in Color: A BIPOC Concert Series.” According to SAI’s website, the concerts are designed “to support and create programming that uplifts diversity and equity in music.” The concerts are a demonstration of the fraternity’s focus on creating a supportive environment for all people in music, regardless of their age, race, or nationality.

SAI also provides support for existing members and students. SAI’s scholarships and grants on both the undergraduate and graduate levels allow their members to support one another through their studies here at Gettysburg and beyond. SAI also promotes the work of its individual members by encouraging the community to attend any upcoming recitals. Currently, SAI’s senior recitals include Sam Burr ’22 (bassoon), Summer Burton ’22 (saxophone), Chloe Dougherty ’22 (clarinet), and Amanda Herold ’22 (flute).

SAI’s support doesn’t stop at financing, though. The fraternity hosts social events and conferences that provide members with opportunities to make connections and aid in networking after their time at the college. Their website includes such events as t-shirt making, movie nights, craft sessions, game events, and various other activities. The fraternity even developed a pen pal system within the organization to stay connected during prior virtual semesters.

SAI requires prospective members to demonstrate a dedicated interest in music and similar projects before joining. Many members are music majors or minors, but they also accept members from across disciplines. Every member is required to demonstrate their interest in music by completing multiple music courses and maintaining a cumulative 2.5 GPA or above, as well as passing a membership test designed by the national organization.

SAI has made great strides in advancing the movement for women’s equality in music, and they aren’t planning to stop anytime soon.

This article originally appeared on page 8 of the November 1, 2021 edition of The Gettysburgian’s magazine.