The Jazz Ensemble entered the stage for the concert on the evening of Saturday, Oct. 23 with an introduction by new ensemble director Eric Byrd. Mr. Byrd set the tone for the evening, opening with jokes and establishing the “go with the flow,” improvisational tone of the concert and its music.

The ensemble began by performing “Wave” by Antonio Carlos Jobim and arranged by Michael Mossman. As its name implies, the song felt as though it were rolling, seamlessly flowing from its highs to its lows. Almost immediately, the theatre was filled with vibrancy and richness, brought to the forefront by the baritone saxophone feature performed by Connor Stewart ‘25.

Their second piece, “Making Whoopee” by Walter Donaldson and Gus Kahn and arranged by Dave Wolpe, featured vocalist Helen O’Neil ‘23. The song had a more upbeat feel, and O’Neil’s theatre arts background was evident in the performance. Her body language and emotive performance brought the expressiveness, and sometimes even humor, of the song to center stage. 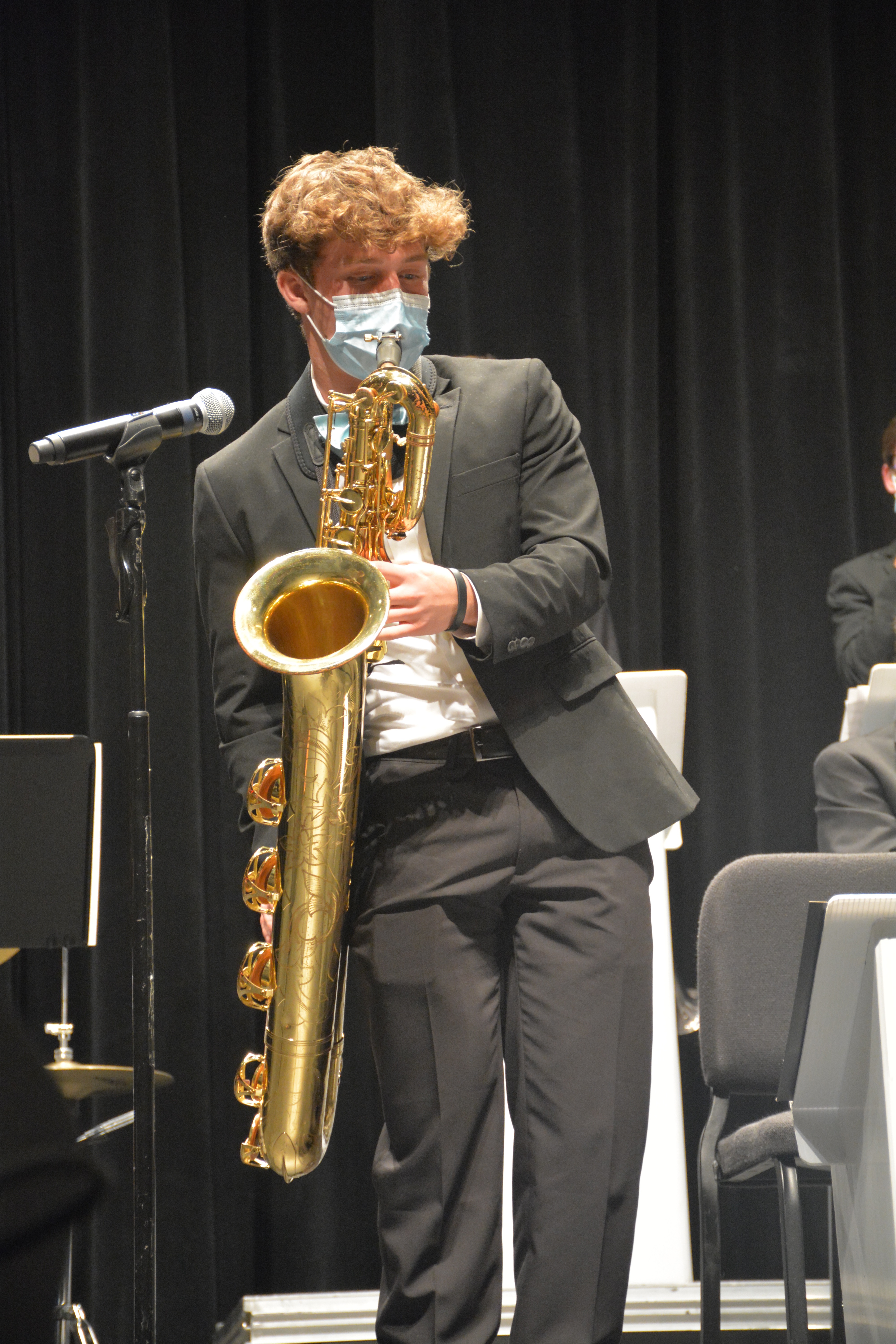 The ensemble’s third piece was “Spring Can Really Hang You Up The Most” by Kris Berg and arranged by Tommy Wolf, and was introduced by Byrd through an impression of the ensemble’s previous director, Paul Carr, earning a chuckle from the audience. The piece began and ended somewhat sorrowfully, evoking the soft breezes of the spring. However, the middle of the piece dug into the real emotion behind those springtime feelings that “hang you up the most”, and was highlighted by heightened dynamic contrast and a trombone feature from Andrew Buckley ‘22.

Following up “Spring” wasn’t summer, but Jazz Dispatch. Jazz Dispatch is a group that, according to the provided description in the program, “focuses on small group improvisation.” Each of their three songs contained elements of improvisation, or as director Dr. Paul Austerlitz put it, “spontaneous composition,” and were entirely memorized by the performers.

Their following two pieces, “Cantaloupe Island” (Herbie Hancock) and “C Jam Blues” (Duke Ellington) included the entire membership of Jazz Dispatch, with each member breathing their own life into the pieces. The improvisational group embodied Nat Wolff’s sentiment, “Jazz is a conversation, a give and take. Jazz is the connection and communication between musicians.” 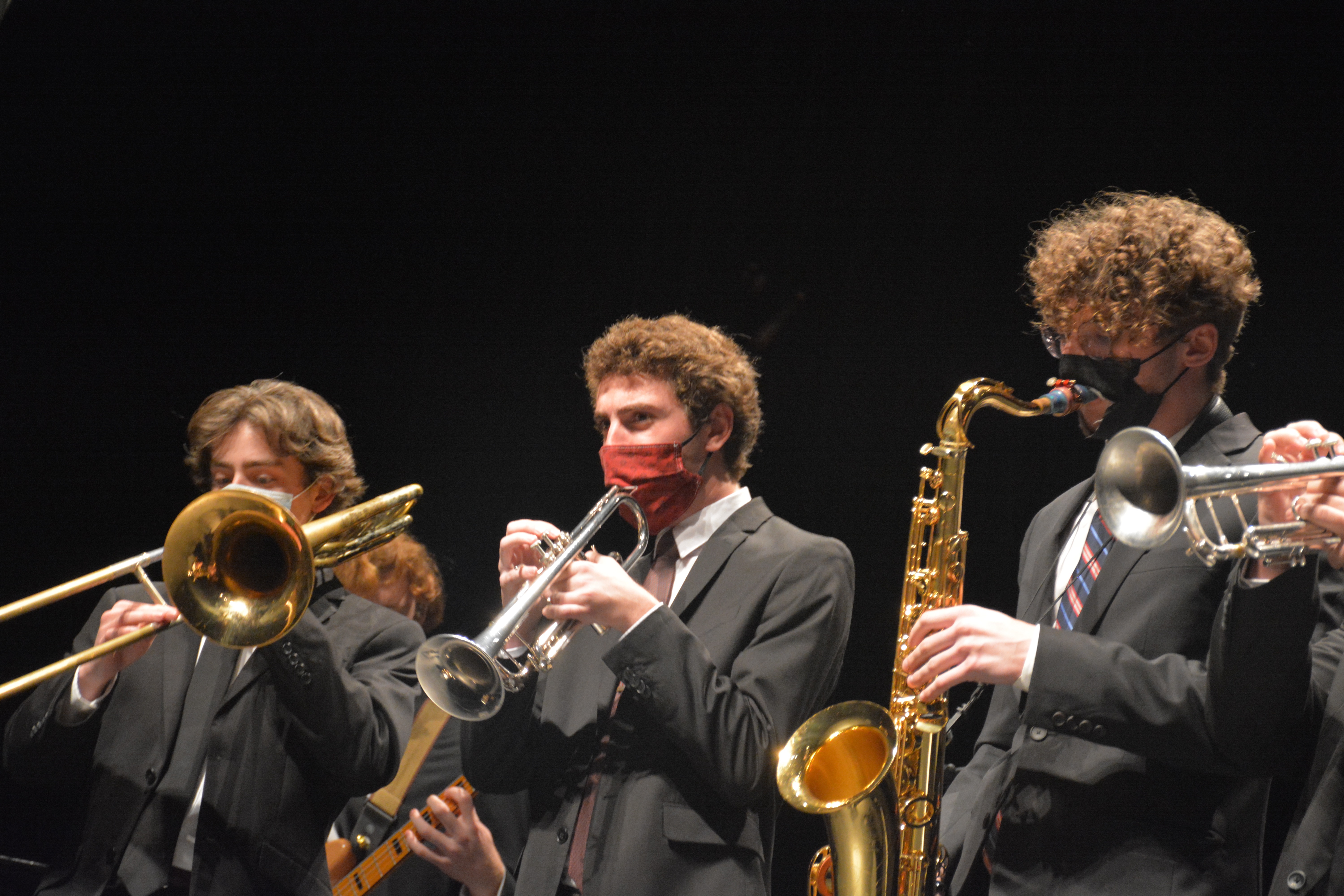 Following Jazz Dispatch was the eight-member vocal group Camerata, directed by Dr. Robert Natter, which traditionally performs a brief set at many Jazz Ensemble concerts. Their first song of the evening was an otherworldly, a cappella rendition of “Over the Rainbow” by Harold Arlen and arranged by Tom Jordan featuring a brief solo by baritone Casey Ottaway ‘22.

They followed up with a Kirby Shaw arrangement of a true jazz standard, Irving Berlin’s “Cheek to Cheek.” This number featured Tim Foster on piano and charming solos from Lily Zhou ‘23 and Zach DeBesche ‘22. Their collective blend elevated the piece, drawing the audience in on the small intimate moment at the heart of the lyrics.

Camerata closed with “Love Psalm” by Darmon Meader, which contained elements of both jazz and classical harmony and phrasing, giving it a choral sound while utilizing the tight harmonies typical to jazz music. 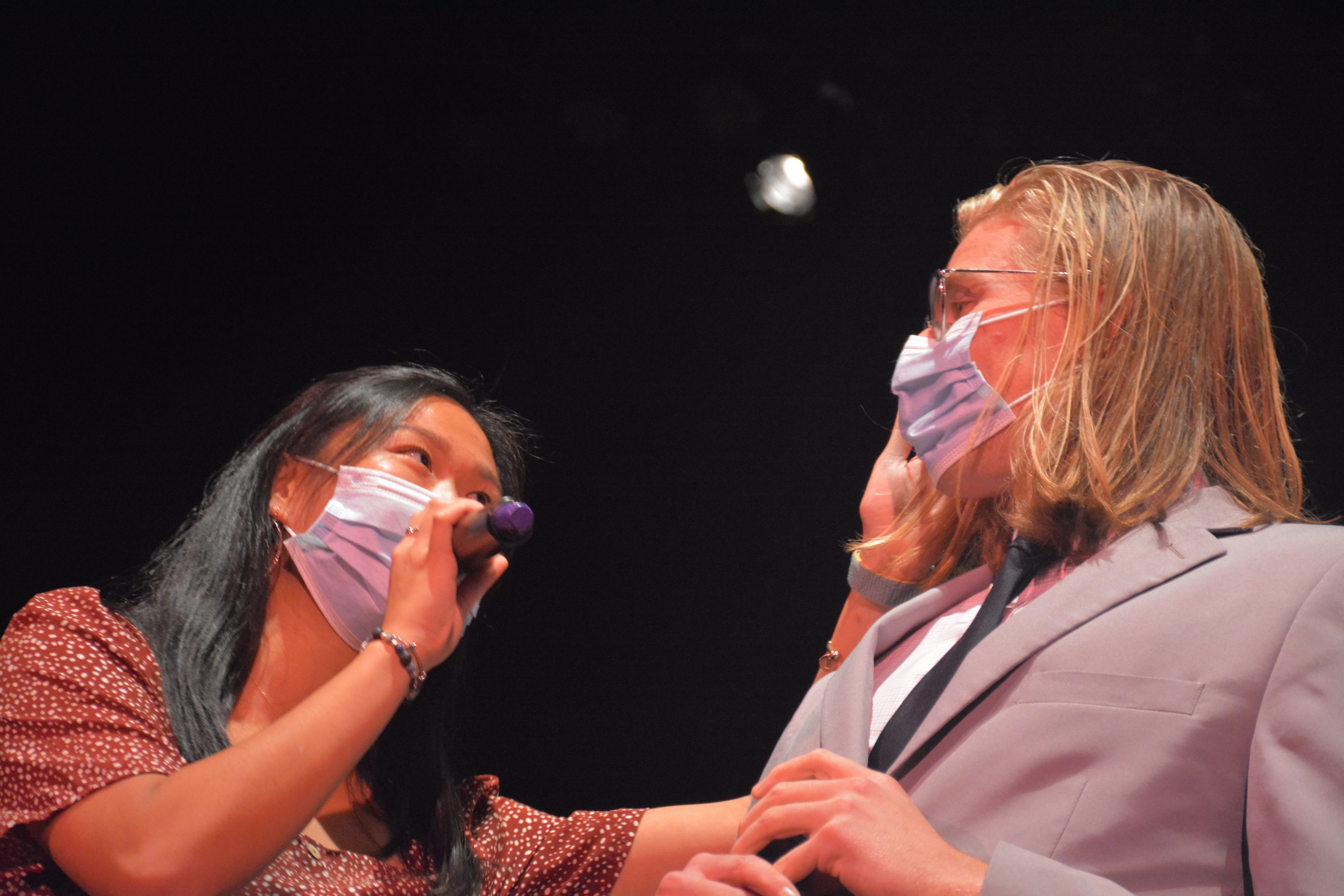 Up next were special guests, the Eric Byrd Trio, consisting of Eric Byrd on piano and vocals, Alphonso Young, Jr. on drums and Bhagwan Khalsa on the upright bass. They began with an original song by Mr. Byrd entitled “Sunday Mo’nin’ Chu’ch” that captured the influences of hymns and choir songs as well as the essence of a warm nostalgia.

This was followed by the trio’s rendition of “I’m Glad There Is You” composed by Paul Madeira. In this piece, Byrd incorporated some of his own flair into the vocals, sometimes exclaiming aloud when he tried out something new, demonstrating the improvisational element within his own, professional jazz. 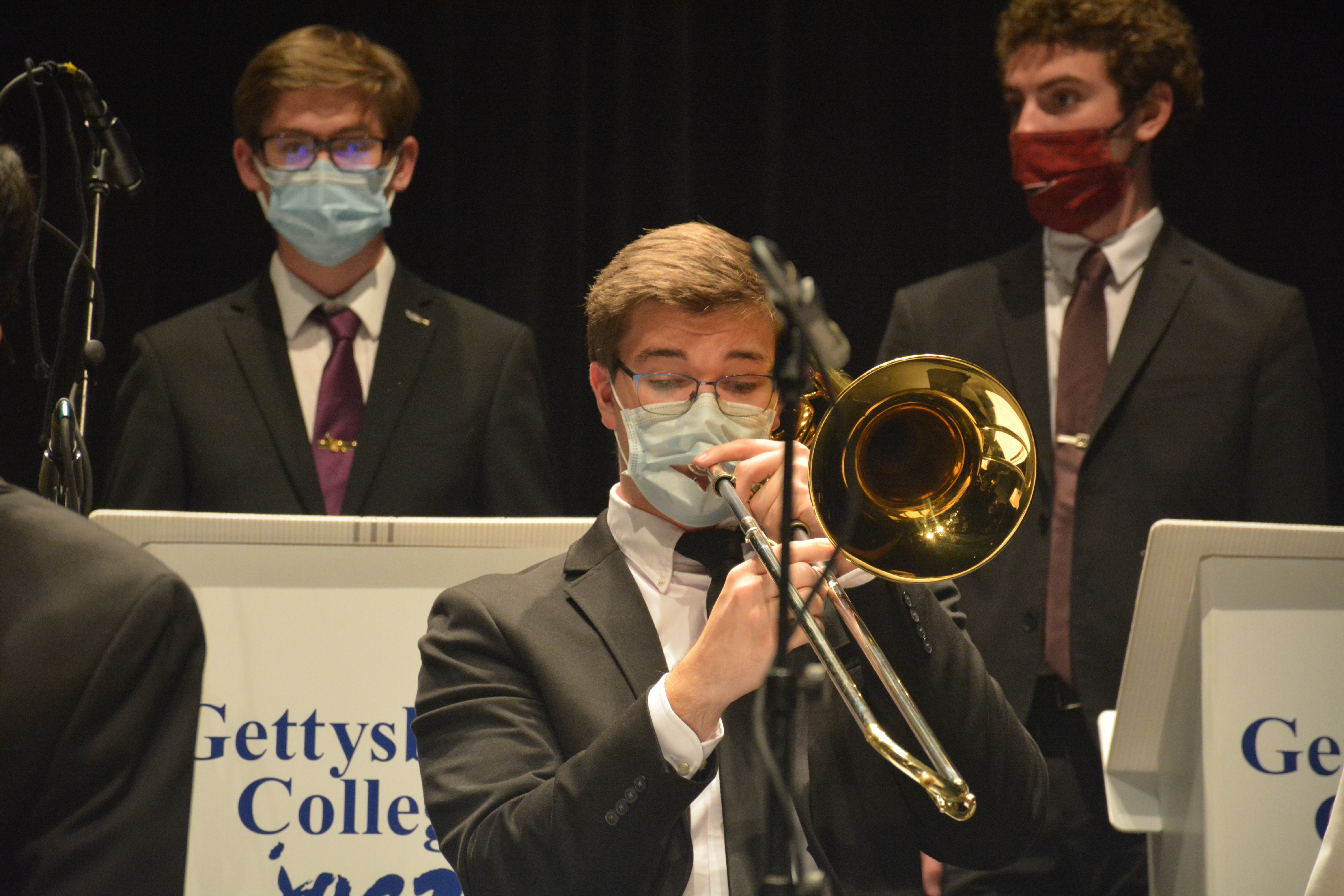 To finish up the show, the Jazz Ensemble returned to the stage. They began their final set with “Cry Me a River” by Arthur Hamilton (arr. Jerry Nowak), with vocalist Julia Gokalp ‘22 stealing the show, delivering a powerful and smooth rendition supported by the depth of the ensemble behind her.

The concert concluded with “Bag’s Groove” by Milt Jackson, a traditional blues piece, because, as Byrd put it, “Jazz starts and ends with the blues.” The magic of the classic blues sound reverberating through the theatre as they blared their final notes can only be described as “jazz.”

Jazz Dispatch will have their own independent concert on Nov. 19 at 8 p.m. at the CUB Junction. Camerata next performs at the Winter Choral Concert on Dec. 4 at 8 p.m. at Christ Chapel.