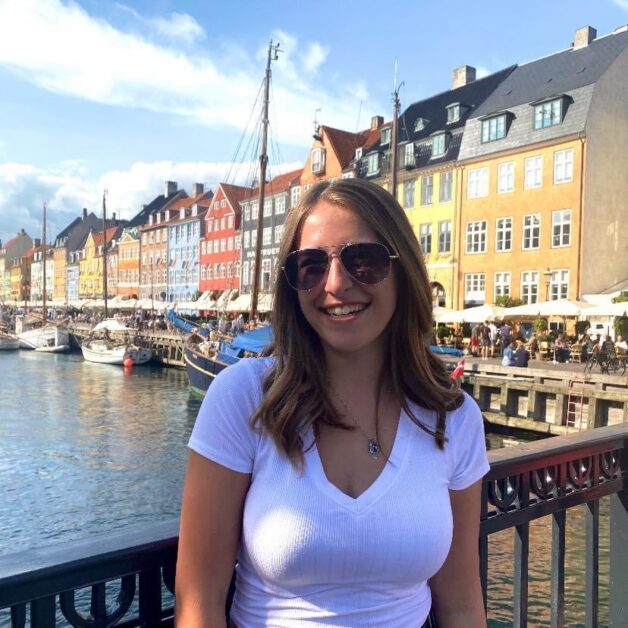 COPENHAGEN – When I originally decided to study in Copenhagen, Denmark back in spring 2020, I had no idea what the world was about to experience. After having to postpone my semester abroad twice, I could not believe it when I actually landed in Kastrup Airport. It felt as if it were a dream, even now as I’m nearing the halfway point in the semester.

Being a student in Copenhagen has been a wonderful experience, spending my mornings in classes on engaging topics and my afternoons trying new coffee shops. It has been a wonderful challenge to balance exploring a new country, interesting courses, and spending time with my host family. Originally coming from California, I had never been inside a castle and the palaces in and around Copenhagen have not disappointed. Of course, the Danish monarchy is the oldest in Europe, so how could they?

Touring all the museums has also been an amazing experience, from seeing the rainbow panorama within the ARoS modern art museum in Aarhus to the historical development of arms technology in the Danish War Museum. One favorite of mine so far has been the Danish Architecture Center—while I’m not too much of a fan of architecture, they have a 40-meter slide that brings you down from the fourth floor to the first!

The DIS: Study Abroad in Scandinavia program is structured so that a student spends a large portion of their time within a “core course” while taking other electives. In addition to the time spent in a classroom, core courses also take two study tours: one week in Denmark and one week outside of the country. These tours allow students to critically engage with their topic in academic field studies, while also providing recreational opportunities to experience Denmark with their peers.
My core course is titled Humanitarian Law and Armed Conflict, which, according to the description on Canvas, aims to “enable students to understand the legal challenges of current and future armed conflicts, as well as enable them to critically analyze and evaluate concrete cases using both legal and political analysis.” The first study tour took me all over Denmark, from Odense to Aarhus to Silkeborg to Skanderborg to Aalborg, and back to Copenhagen.

My favorite academic field trip was a lecture at the Aarhus University on how climate change will fundamentally impact international relations, given by a professor who teaches there. While it was not something I would have chosen to do myself, mountain biking in Silkeborg was definitely the highlight of the recreational activities. I’ll be leaving on my second study tour on Halloween to go to Kosovo to study the Balkan Wars. The itinerary has not been released yet, but fingers crossed the mountain bikes stay in Denmark!

My favorite routine has become stopping into Sankt Peders Bageri for some onsdagssnegle, or Wednesday snails. Only sold on Wednesdays, these cinnamon rolls are definitely worth getting up early in order to grab one before a morning class. It is also the oldest bakery in Copenhagen, operating since 1652.
One highlight to mention has been seeing my fellow Gettysburgians around the city. Before the weather got bad, some of us met up at Reffen to enjoy their street food market and share our experiences.

This article originally appeared on page 10 of the November 1, 2021 edition of The Gettysburgian’s magazine.