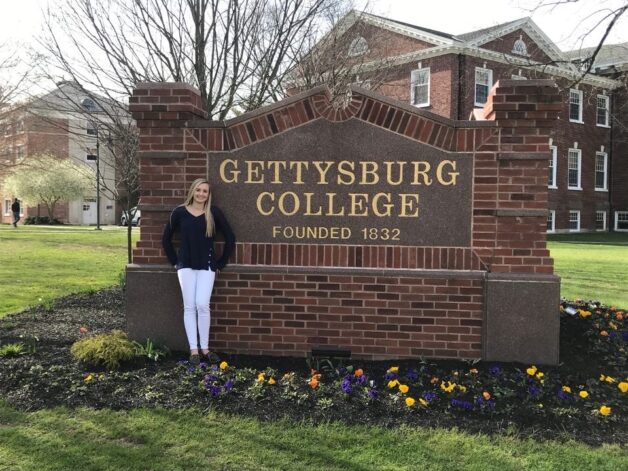 Sara Tomson ’22, a philosophy and sociology double major with a minor in peace and justice studies, serves as this year’s Panhellenic Council President.

Tomson wanted to join Greek life long before college after seeing the lifelong experiences and relationships her mother had as a member of the Alpha Xi Delta women’s fraternity. In 2020, Tomson became the Chi Delta Panhellenic Delegate, which allowed her to work closely with the Panhellenic Council and ultimately apply to be president for the following year.

“I think Greek life is a great way to make friendships and connections that last a lifetime,” she said. “It also provides so many opportunities within and outside of Greek life. Being a part of the community allows you to meet so many people and get involved in other clubs and organizations on campus.”

The Council works to promote unity among these sororities and fraternities and provide educational opportunities and support to its members. Scholarship, service, and cooperation are traits highly valued and included in the Panhellenic Creed. Tomson also mentioned how the work of the Panhellenic and Interfraternity communities have worked to combat on-campus issues as well as help in-state programs.

“I think one of the ways Panhellenic and the Interfraternity community at Gettysburg can be improved is by overcoming some of the stereotypes associated with Greek life that aren’t accurate at the Gettysburg campus,” Tomson said. “I think many unaffiliated students only see Greek life for its social events and don’t see some of the key principles and aspects of Panhellenic and Interfraternity organizations such as scholarship, philanthropy, and so much more.”

By creating a community of all sororities and women’s fraternities, the Panhellenic Council provides a support system of women who are constantly empowering, caring for, and holding each other accountable. They encourage each other to be leaders and to strive for a strong work ethic, in and outside of the classroom. Panhellenic life also encourages them to step out of their comfort zone socially, reach out to other women in the community, and be socially responsible citizens of Gettysburg College.

That bond created between women is what lead Tomson to the Panhellenic community in the first place, having seen the lifelong effect it had on her mother, and it is still part of what drives her in her service today.

This article originally appeared on page 21 of the November 1, 2021 edition of The Gettysburgian’s magazine.