Since the Bullets were celebrating their senior day, prior to the game, they announced each senior, presented them with flowers, and had them walk up with their families to take pictures. There are six seniors on the team for the 2021 season.

“The seniors this year were great leaders on and off the field and gave it their all in each practice and game,” forward Hailey Rhine ’24 said. “The game on Saturday did not end how we wanted to, but Haverford College is a strong team and ranked high in our conference.

“As our regular season starts coming to an end, our team wants to keep improving on the field and hopefully make it to the conference post-season.”

During the first quarter, both teams had three shots in the opening minutes of the game. Ravenel Davis of Haverford College sprinted down the field and scored against Besselman ’22 just past the ten-minute mark. Beccaria had two shots both saved by Hannah Roth in the first quarter.

Haverford missed two of their shots starting in the second period. It was a deadlock for most of the quarter. Fraiman had a shot on goal right before the half was over, but Roth saved the goal, keeping the Bullets in a 1-0 deficit.

Haverford tried hard for another goal out of the gate, with Davis taking a shot on goal that Besselman was able to deflect. However, Amy Kim corralled the deflection and scored, giving the Fords a 2-0 lead.

Olivia Ahart of Haverford scored early in the fourth quarter, upping the Fords’ lead to three. Beccaria took a shot on goal, but the Haverford goalie saved it again, maintaining the shutout. Bertrando took her fourth and final shot late in the game to at least put the Bullets on the scoreboard, but it just missed the right post. 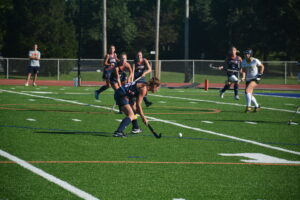 Last week, Bertrando was named Centennial Conference Field Hockey Offensive Player of the Week of October 19th, her first-ever weekly honor. She earned this award by going for a hat-trick and scoring all three goals in a 3-1 win against Washington College. Bertrando is tied for fifth in the conference in goals scored with 19 on the season. The star forward took a gap year last year to play her final season, and she is in the program’s top 10 list for overall career points with 72 points total. (Information from Gettysburg College Athletic Communications)

The Bullets have two more regular season games coming up. They face McDaniel College on Wednesday, October 27th at Shirk Field at Musselman Stadium at 3:30 pm and will travel to Ursinus College on Saturday, October 30th. If they win their next two games and make the playoffs, the first round of the Centennial Conference Championship is November 3rd, with the Semifinals on November 5th and the Finals on November 6th.