Slippery conditions did not stop the women’s soccer team as they defeated Centennial Conference opponent Washington College by a score of 3-1 on Saturday, October 16th.

The offensive unit for the Shorewomen dominated the opening minutes of the game, firing seven shots on senior goalkeeper Maddie Cunningham in the first 20 minutes. Cunningham did not let up, though, recording three of her five saves during this attack to keep the Shorewomen off the board. The Bullets, on the other hand, started slowly, retaliating with only one shot on goal by Morgan Hobson ’24 to open the first half.

The momentum swung quickly in the Bullets’ direction in the middle of the first half. Senior captain Erika Muskus drilled her seventh goal of the season off an intricate pass from the right side by fellow forward Grace Slevin ‘23, putting them up 1-0. This goal provided the needed energy to excite the Gettysburg offense for the rest of the game. 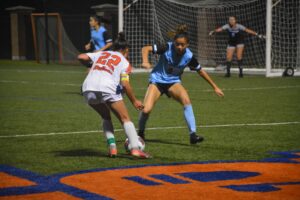 The Bullets are 7-0 this season when scoring first, and this game would not be an exception. A missed shot by forward Jalia Musah ’25 was followed by an electrifying goal by defender Dani Bloching ’24, her first career goal as a Bullet.

Bloching described the feeling of tallying her first goal. “[It] was an indescribable feeling, definitely a feeling I will never forget,” she explained. “I originally meant to slot it in for one of the forwards feet,” Bloching admits, “but it found the back of the net. Scoring was a surprise but an amazing feeling.”

Bloching was not the only one who marked their first career goal against the Shorewomen. Musah continued her attack against Washington College senior goalkeeper Noah Smith after entering the game nearly ten minutes prior. Controlling a pass from fellow first year Ashley Carbonier, Musah rang a shot into the post which deflected into the net for the Bullets third goal.

The energy on Clark Field favored Gettysburg heavily going into halftime despite the Shorewomen coming out on top 7-5 in terms of shots and 4-0 in corner kick opportunities. Fans were not only soaking up the rain, but the excitement radiating off the turf. 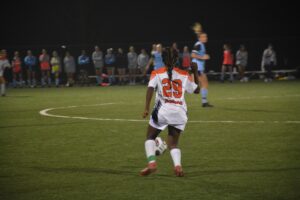 The Bullets were not the only team celebrating a first career goal from one of their players. Seeking to decrease the deficit, the Shorewomen opened up the second half with a similar level of intensity as the first. Five minutes in, Elena Hilario slipped her first career goal past Cunningham off an assist from teammate Lauren Maynor, cutting the Bullets lead to 3-1.

After this, though, the defensive units became the focus of a physical second half of play. A total of 13 fouls were shared between the Bullets and Shorewomen as Washington College tried to claw back at the lead Gettysburg had produced in their exhilarating first half.

The Bullets were quiet offensively in the second period as their energy was diverted to the defense. Midfielder Paige Merz ‘22 delivered their first corner kick of the game, setting up a shot by Leah Mangold ‘24. Smith was able to smother her shot along with three others in the half.

The Bullets defense was phenomenal in the last 20 minutes of the game, preventing the Shorewomen from getting off a single shot. In the previous two meetings between these opponents, the Bullets outstanding defense has held Washington’s offense to one goal or fewer.

The Bullets celebrated both their victory and their teammates’ milestones as the seconds ran out on the game clock. The Bullets are on a three game win streak, and this win increased their all-time record against the Shorewomen to 21-1. The women’s soccer team has an overall record of 9-2-1, and they sit in third in the conference standings at 4-2-1, trailing Johns Hopkins and McDaniel.

They look to climb the rankings and continue on their winning trend in a non-conference match against Catholic University on Wednesday, October 20th.