The men’s soccer team secured a non-conference victory over Salisbury on Wednesday, October 13, defeating the Sea Gulls 3-1. Connor Fife ’23 netted all three goals for the Bullets and became the first Gettysburg men’s soccer athlete in four years to score a hat trick.

The intensity heightened soon after the clock started ticking down, with the Bullets offense, led by forwards Jonathan Molina ’22, the only senior on the squad, Adian Giquinto ’25, and the aforementioned Fife, putting immediate pressure on the Sea Gulls defense and goalkeeper. Molina fired off a shot that got blocked, but Fife was there to corral the deflection of the Salisbury defender and capitalize, knocking in a one-timer goal only two and a half minutes into the game.

The Bullets attack did not let up. They were able to get another shot on goal and two corner kick opportunities in the following minutes. While Connor O’Donnell ’23 took the actual corners for the Bullets, whenever the ball was in Sea Gulls territory and went out of bounds, Colton Ward ’25, who started as a defender, would make his way up the field to throw the ball deep into the box, giving the Bullets many more “corner” opportunities than the box score would show. 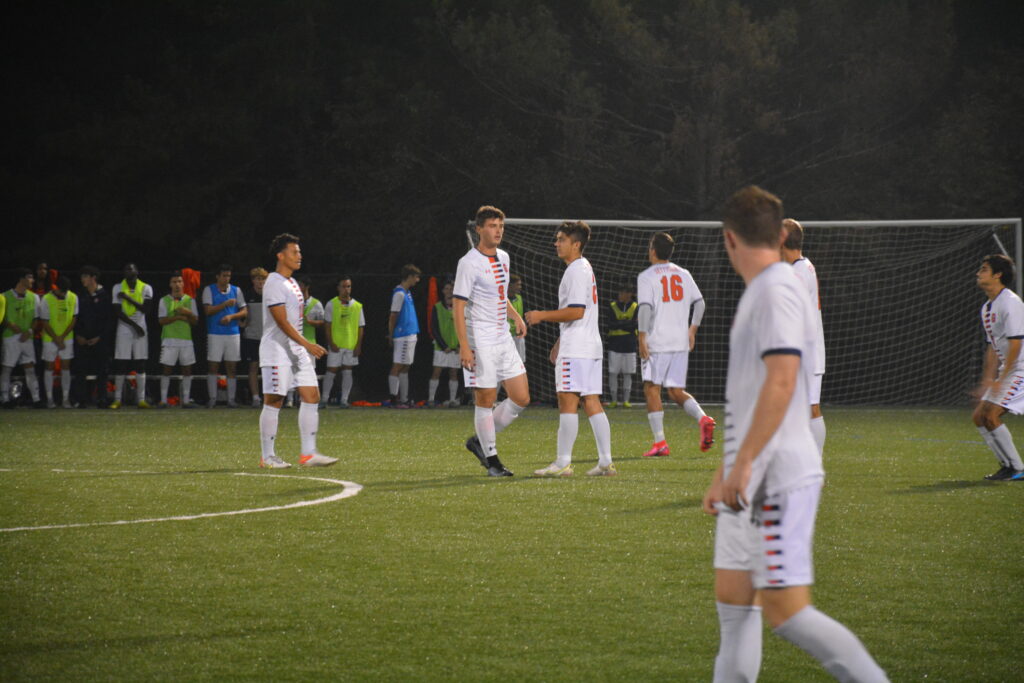 Later in the first half, the Sea Gulls had an opportunity to even the score. Off a corner kick by Brady Young, Alex Floyd attempted to head the ball into the net. Luckily for the Bullets, goalkeeper Kevin Muhic ’24 made the save, his first of five in the game, bringing his total to 41 on the season. Ten minutes later, Salisbury had another chance to score off a corner kick, but their ensuing shot was blocked, keeping them off the scoreboard.

While the game was physical, the first whistled foul occurred deep into the first half after the thirty-minute mark. The Sea Gulls made up for their early miscues and began to generate consistent offense, peppering Muhic and the Bullets defenders with shots but unable to find the back of the net. The Bullets maintained their 1-0 lead going into halftime despite trailing in a number of shots on goal.

The physicality continued in the second half, but now the fouls were being called, disrupting the flow of the game. Each team was looking to bolster its resume for a potential NCAA tournament bid at the end of the season with a non-conference win. Ten minutes into the second half, Salisbury found themselves near the Bullets net. Brady Young took a shot off a deflection, but Muhic was there once again to prevent the goal.

Five minutes later, the Bullets, and more specifically Fife, notched their second goal. O’Donnell was working his way through defenders on the right side of the field up near the end line. After impressively keeping the ball inbounds, he struck a perfect cross right past the goalkeeper, allowing Fife, situated right in front of the net, to make the easy header into the goal. This was O’Donnell’s eighth assist of the season, putting him in first place in the category in the Centennial Conference.

Salisbury did not take long to respond. Ben Pigg ’25, a first-year forward, and his teammates were applying pressure on the Bullets defense, with Pigg attempting a shot unsuccessfully at the 68-minute mark. Only two minutes later, Pigg found the back of the net to put the Sea Gulls on the board, now trailing 2-1. It was an impressive way to score his first goal of the season; his shot from the right side of the field somehow got past the 6’3” Muhic and landed in the back left corner of the net. While Muhic wouldn’t accrue his fifth shutout of the season, he would remain clean for the rest of the game. He has given up only 15 goals in 12 games played this season.

The back-and-forth continued between the teams, with the fans of both teams getting into the game. Salisbury was only down one, and their offense would not give up – their players out-shot the Bullets 11-4 in the second half.

With the increased intensity, the cards started flying. At the 83 minute mark, Salisbury’s Owen Peters drew a yellow card with his foul, setting up Molina on the right side of the field for a free-kick. His ball sailed across the field to Fife, who seemed like he was perfectly positioned all day. Tracking the ball’s trajectory, Fife initially tried a header, but his defender blocked the attempt. Luckily, the ball bounced down right in front of Fife’s boot, and he kicked it in for his third goal of the game.

His teammates immediately went to surround Fife and celebrate his amazing accomplishment. His hat trick was the first by a Bullets men’s soccer athlete since Patrick Santini ’18 scored four goals against Haverford in 2017. Fife is now second in the conference with eight goals. (Information from Gettysburg College Athletic Communications.)

The Bullets are now a perfect 5-0 at home, and they look to continue their success at Clark Field on Saturday, October 16 against Washington College (Md.) in a Centennial Conference matchup.