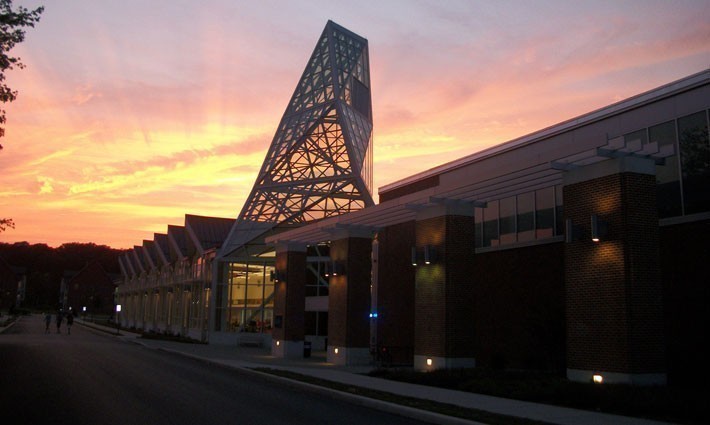 It was an eventful two days for women’s volleyball as they began their 2021 season with a bang, defeating all four opponents in the annual Battlefield Classic held in Bream Gym at Gettysburg College.

The team, who has not seen regular competition since 2019, started off strong in their first match of the tournament, defeating Gallaudet University by a score of three sets to one. After taking a quick 13-4 lead over the Bison, Kat Wilt ‘23 came up big for the Bullets, hammering in a pair of kills to keep pressure on the Bison. Gallaudet would make a strong push late into the first set, but the mountain was too high to climb for the Bison, as Gettysburg took the first set 25-19.

Gallaudet put up a strong showing in the second set, but their errors gave the Bullets a window of opportunity, rattling off six points to come back and win the set 25-22. Gallaudet would not lay down, however, as they relied on big plays from Karlita Lewis, who led the Bison with 13 kills. After dropping a tightly contested third set, the Bullets were able to put the Bison away in the fourth set, ending any hope of a comeback with an impressive win. Gettysburg jumped in front 9-1 to start, and they did not look back, taking the final set 25-12 and starting off Friday with a tally in the win column.

Much of the Bullets’ success could largely be attributed to Zanza Kuba-McCoy ’23, who was a workhorse for the Bullets throughout the weekend. Coming off a phenomenal 2019 season in which she won Centennial Conference Rookie of the Year, Kuba-McCoy totaled 15 kills in both matches on Friday, using her presence on the front to rack up points in a hurry for Gettysburg.

Gettysburg continued their dominance into the second game of the tournament, sweeping Penn State Berks three sets to none. In the first set, Chelsea O’Leary ’24 served up three aces against the Nittany Lions, and the Bullets were looking just as good as they did against Gallaudet. Kills by Kuba-McCoy and Sarah Ellis ’22 gave the Bullets strong momentum, and they won the first set handily 25-10.

The second set was not as easy for Gettysburg as both teams went back and forth, and at one point the Nittany Lions saw themselves with a 17-16 lead. This hope was squandered as Kuba-McCoy added another kill to her total to clinch the victory 25-22. The third set was a nail-biter despite Gettysburg jumping to an early lead. Penn State Berks once again clawed their way back, getting a lead over the Bullets 23-22 before Sophie Nasir ’25 put the nail in the Nittany Lions’ coffin with a beautifully executed push, securing the Bullets their final set victory by a score of 25-23.

The Bullets would take Friday’s energy, confidence, and success into Saturday, where they swept yet another Nittany Lions team in Penn State Altoona. In the first set, the Bullets started surprisingly slow, trailing 13-6 at one point. However, attack errors would plague the Nittany Lions, allowing the Bullets to capitalize and jump in front 20-16. Both Kylie Ulrich ’24 and Kuba-McCoy had kills late in the set, giving the Bullets the 25-19 victory.

In the second, Gettysburg played to their full potential, knocking down 40 percent of their attack attempts and capturing the set by a score of 25-22. The Nittany Lions, needing a win to stay alive and force an extra set, showed out in the third, trading points with the Bullets. The back and forth continued until Penn State Altoona shifted the momentum in their favor, taking a 16-15 lead after a timeout. The Bullets rebounded with Nasir tallying an ace and Kuba-McCoy scoring back-to-back kills to put Gettysburg in motion to a 26-24 victory.

To wrap up this year’s Battlefield Classic, Gettysburg found themselves playing Rowan University. Gettysburg came out strong and took an early lead over Rowan 16-11. The Profs would eventually tie it up 18-18, only to lose the lead again 24-22. The Bullets then gave up four straight points to drop the first set 26-24.

The second set was a thriller, with no team holding more than a three-point lead the entire set. In the middle of the set, Wilt put the Bullets on top with a kill, only for Rowan to come back to take the lead 17-15. An attack error ended the set with a 25-23 loss for the Profs.

Both teams traded blows in the third with Rowan leading 16-15 midway through the set. Kuba-McCoy came up big for Gettysburg once again, racking up kills and putting the Bullets up 18-15. Ingrid Bayer ’22 and her five blocks proved crucial in keeping the Profs back on their heels. Gettysburg powered through and won 25-19, giving them a two to one set advantage.

Rowan played their hearts out in the fourth set, rattling off points and taking a 12-8 lead. Gettysburg fought back and tied the set 20-20 only to commit three errors and allow Rowan to take the set 30-28.

After two full days of volleyball, the Bullets showed no fatigue going into the final set, taking an early lead of 11-7. Rowan would not go down without a fight as Natalie Ogden of the Profs led a six-point run. Despite the threat, the Bullets were able to hold on to a lead, and Cat Holtz ’25 sent a misplayed attack attempt right back, giving Gettysburg the victory.

This year’s Battlefield Classic was another great one for the Bullets, as they have now won 18 of their last 20 matches played in this tournament. Kuba-McCoy and O’Leary placed themselves on the All-Tournament Team after impressive showings. The Gettysburg Volleyball team will look to continue their hot start when they travel to Messiah University next Saturday.