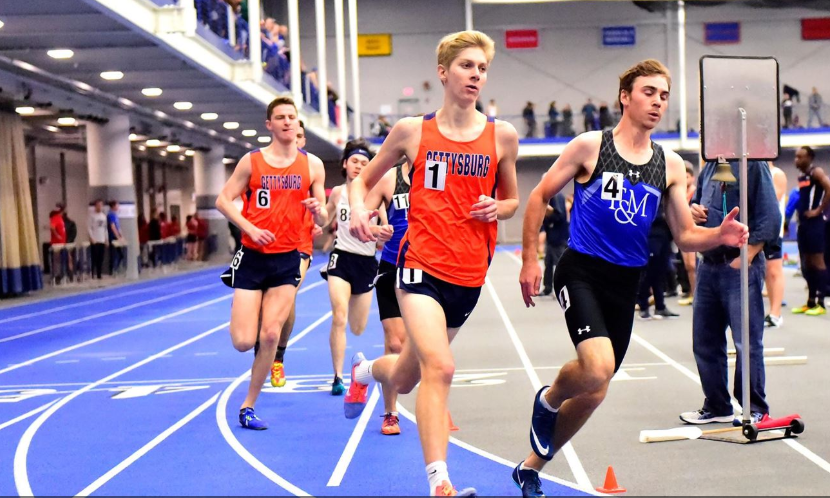 Gettysburg’s golf teams, as well as the track and field teams, have been knee deep in competition thus far. Both programs are excited to be able to finally compete again within the Centennial Conference. Here are how these teams are faring against opponents this year.

Men’s track and field opened their season on Apr. 10, heading over to Carlisle, PA to compete in the Dickinson Invitational. Among the Bullets’ top performers at the meet was senior Nick Grissinger, who placed first in the 400-meter hurdles, with a time of 56.93. Grissinger did not stop there though, as he led Gettysburg to another first-place finish with his 12’0” mark during the pole vault event.

Junior Will Hopkins also had great finish, completing his first ever 1,500-meter run with a time of 4:06.93 to claim second place. Senior Luke Matzke placed fourth in the 3,000-meter run with an impressive time of 9:27.83 that ranks eight in program history. Gettysburg came in third out of four teams at the meet, with a total of 146 points. Dickinson came in first with 256 points.

The Bullets traveled south a week later to compete at the Hopkins/Loyola Invitational in Baltimore, Maryland, which included a mix of student-athletes from Division 1 and 3 schools, as well as community colleges. Junior Corey Palazzolo obtained three top-10 marks on the day, placing fourth in high jump (6-00.75), sixth in long jump (19-11.75), and sixth in triple jump (39-06.50). Classmate Will Hopkins also had a successful day on the track, placing eighth in the 1,500-meter run with a personal record time of 4:03.66. The Bullets secured a ninth-place finish at the invitational, with 21 points. Delaware State University took home first place with 132 points.

The women’s squad also began their season at the Dickinson Invitational. Junior Katherine Mangione was one of the top performers for the Bullets, claiming two first-place finishes in discus (106’8”) and javelin (111’9). Mangione tied her personal record with her discuss toss, and her first-place javelin throw came on her first attempt.

Freshman Alexa Schauder also had herself a day in her collegiate debut, capturing two more top finishes for Gettysburg in high jump (4’7 3/4”) and pole vault (8’6”). The final first place spot came from sophomore Amanda Addesso, who competed in the 5,000-meter run, securing her first career victory. Despite these great efforts, Gettysburg came in third out of four teams, with a total of 127 points. Dickinson came in first with 200 points.

From there, the Bullets competed the next week at the sam two-day Hopkins/Loyola Invitational meet. Only two members of the team performed on the first day of the meet, as senior Diana Bianco Riley and junior Jessica Alessi both took part in the hammer toss. Riley’s best toss at 111’0” came on her final attempt to give her an eight-place finish. Alessi notched a 109’04” on her first, giving her a ninth-place finish right behind.

The rest of the Gettysburg team competed the next day in Baltimore, with Mangione and Schauder leading the pack again. Mangione secured a third-place finish in javelin (122-07) and two seventh-place finishes in shot put (33-08.50) and discus (104-10). Schauder placed third in the pole vault (9-05.25), which ranks sixth on the program’s all-time list, and fifth in the high jump (4-9.00). The Bullets came in eighth out of seven teams, tallying 32.5 points. Towson University obtained the top spot with 122 points.

Gettysburg’s men’s and women’s teams are both set to host their own invitational meet this Saturday at Shirk Field at Musselman Stadium.

Gettysburg’s women’s golf team hit the links for the first time in late March at the McDaniel Invitational. Junior Cameron D’Amica finished in fourth with a 94 that put her at 24 over par. This was the fourth time in D’Amica’s career that she secured a place in the top-five. Senior Claire Nagel also had a solid performance, coming in seventh place with a 104, which put her at 34 over. Fellow senior Lindsay Waller took home the twelfth spot with a 128 that was 58 over.

The following week, the Bullets hosted their own invitational match at Hanover Country Club. D’Amica obtained another top-five finish by placing third with a 96, at 25 over par, just three strokes shy of Muhlenberg’s Emma Mueller, who came in first. Nagel shot 122, putting her at 54 over and in tenth place, while Waller took the fourteenth spot with a 131 that was 60 over par.

Gettysburg then went on to compete in the first round of the Centennial Conference Championship on April 17th and 18th in Lancaster. D’Amica carded a 94 on the par-70 course, hitting a birdie on the third hole and six bogeys on the day to put her in eighth place going into Sunday’s competition. Waller and Nagel both appeared in their first career conference championships, shooting 109 (+39) and 118 (+48) respectively.

The next day, the Bullets took to the course again, with D’Amico claiming an eleventh-place finish after concluding her weekend with a total of 195 (94-101). She recorded six bogies, but hit a par on hole 17, ending her season as the top golfer for Gettysburg. Waller finished in nineteenth with a 224 total (109-115) and Nagel placed twenty-third with her 237 total (118-119).

Marymount University secured its first conference title with a team score of 722 (363-359). The Bullets did not have the minimum number of golfers to qualify for a team score, the first time they have not won the CC championship in almost a decade.

The Men’s golf team began their long-awaited season on March 27th at the two-day McDaniel Invitational. Gettysburg started off hot, shooting a combined 311 to capture second place on the first day of the event. Senior, Quinn Greene, junior Hayden Moffat, and freshman Evan Drummond all tied for seventh place, finishing with 77s at 4 over par. The second day of the tournament was cancelled, so the Bullets wrapped up the weekend with an impressive second place finish.

Back in Gettysburg, the team hosted an invitational match of its own at the Qual Valley Golf Course on April 8th. Freshman Cameron Deiuliis paved the way with a 73 at 1 over par, earning himself individual medalist honors. Right behind Deiuliis in the score card were Greene and junior Hayden Moffat, shooting 75 (+3) and 76 (+4) respectively. These marks awarded Gettysburg its first team victory of the season, as the first eight spots were taken by Bullets.

Gettysburg followed this win up with a second place finish at the Franklin and Marshall Invitational and a fourth place spot during the Dickinson Invitational. At their second hosted invitational of the season, the team was rewarded with another victory after their stellar team performance that tallied a combined 304. Greene and fellow senior Daniel Rieger recorded their lowest scores of the season with a 74 (+3) and a 75 (+4) respectively. Rieger was able to produce twelve pars on the day, while Green notched a couple of birdies and six pars on the back nine, after starting off slow on the front half.

This past Monday was the crew’s final regular season match, back at the McDaniel Invitational. The Bullets made it two in a row, coming in first place with a total of 306, surpassing Dickinson by just one stroke. Once again, Gettysburg was led by Greene, who shot a 74 to put him 3 over par. This performance marked Greene’s sixth top ten finish of the season. Deiuliis and Moffat also got to work, as they tied for eighth place with scores of 77s (+6). Junior Tristan Hochman shot a 78 (+ 7) to tie for tenth place and sophomore Joseph Furlong brought up the rear of the lineup with an 80 (+9) that put him tied for twelfth

The Bullets look to continue their successful season this weekend when they compete in the Centennial Conference Championship in Hershey, PA.