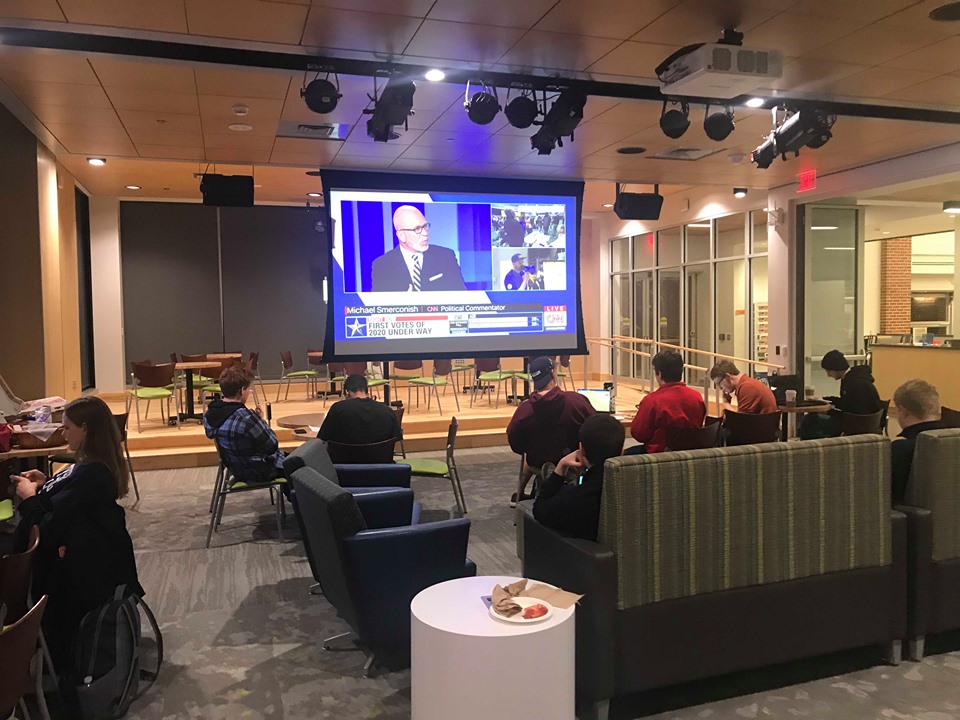 Students gathered in the Junction to watch the 2020 Iowa Caucus. (Emily Dalgleish/The Gettysburgian)

We still do not know who won the Iowa Caucuses, but students stayed late into the evening Monday waiting to find out. The Fielding Center for Presidential Leadership Study and Gettysburg College Democrats hosted an Iowa Caucus watch party in the CUB Junction at which nearly fifty students gathered to watch the caucus process and results while engaging in political conversations.

A stream of CNN’s coverage of the caucuses played on the big screen in the Junction as students discussed presidential primaries, the high percentage of young voters, and what a caucus actually is.

“I’ve actually never watched a caucus before and until recently, I didn’t know how they worked,” said Julia Golkap ‘22, who is learning about caucuses in her government class. “I want to get more politically involved and increase my awareness overall.”

Ziv Carmi ‘23 agreed with Golkap that he had less knowledge of the caucusing process and said, “I’ve never seen a live caucus before.”

Carmi also mentioned that the watch party was an opportunity for him to talk to students with ideologies across the political spectrum.

“I thought it would be a lot of fun to get together with a bunch of other people who are as politically minded as I am,” said Carmi, “even if we don’t share the same political views.”

Throughout the rest of the spring semester, the Fielding Fellows will continue to host primary and caucus watch parties, free and open to all students, all from 8:00 p.m. – 11:00 p.m.