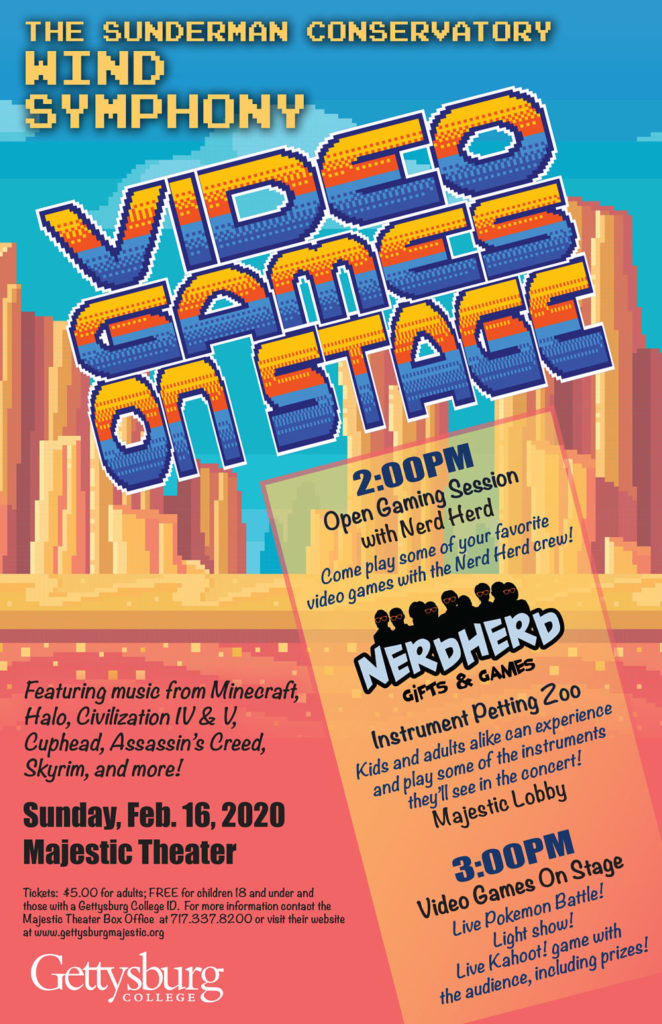 Not being a video game aficionado myself, I anticipated that my attendance at Sunday afternoon’s Sunderman Conservatory Wind Symphony concert would mostly be a chance to support some friends in the group, but that I would not be particularly interested in the music. I was wrong. It was a hoot.

The Wind Symphony programs a family / pops concert each February in an effort to bring out a wider audience to the Majestic than might attend a concert of more standard wind ensemble literature. Having played in the ensemble over the past three years (my senior spring unfortunately grew too busy for me to continue), I can attest that, while the concerts have always been well-received by those in attendance, the size of that attendance has varied. On Sunday, though, the balcony was full, the orchestra was far from empty, and I saw members of the greater Gettysburg community that definitely are not Wind Symphony concert regulars in attendance, perhaps attracted by a pre-concert “instrument petting zoo” or the chance to play video games with staff from Nerd Herd.

All of this is to say that anticipation was palpable as Dr. Russell McCutcheon, Director of the Wind Symphony, announced each tune. His jocular curtain talk throughout the afternoon frequently elicited laughter, applause, and, perhaps, an occasional friendly eye-roll.

The concert opened with a medley that included music from Halo, Kingdom Hearts, and the first of two renditions of the “Baba Yetu” theme from Civilization IV. Occasionally, the piece was a little on the one-dimensional side, which prevented it from building much forward momentum, but those moments were outshined by two outstanding brass solos: one from Jeremy Porter ’20 on horn, and the other from Abel Rose ’21 on euphonium.

The program continued with themes from “Minecraft,” the announcement of which elicited audible gasps of excitement. The ensemble handled the piece’s repetition with emotive dynamic contrast and nice precision, particularly in the more rhythmic lines from the low reeds.

McCutcheon managed to sneak some Gustav Holst into the program during the concert’s third piece, “I Vow to Thee, My Country,” which was used in Civilization V and includes themes from Holst’s “Thaxted.”

From there, the tenor of the concert changed dramatically with a rendition of music from “Pokemon” that featured Eric Gabriel ’20 on the drum set, McCutcheon conducting with a backward hat, and Jared Barna ’20 and Zach Rhodes ’20 leaving their places in the percussion and horn sections, respectively, purportedly to play the Pokemon video game on a projected screen. (The idea that this was live video game action would have been more convincing had the YouTube video player not been visible on the screen, but the audience did not seem to mind.)

The trumpet section shined in the program’s fifth selection, a suite from “World of Warcraft.” The ensemble handled the piece’s frequent time signature changes with ease.

The concert then paused for some audience participation in the form of a Kahoot quiz developed by Amanda Herold ’22, who helped McCutcheon to develop the concert theme from start to finish, on video game trivia. The Kahoot was fine, but, truth be told, my eye was drawn to the percussion section, where Gabriel broke out with what I imagine he would tell you were some fine dance moves to the iconic Kahoot tune. My inclination would be to characterize them more as dramatic flailing, but who am I to judge. Regardless, it was pretty amusing.

A Victor Lopez chart of “Cuphead” offered the saxophone and trumpet sections the chance to demonstrate that they had played some jazz before, a medley of “Epic Gaming Themes” included the concert’s second iteration of the “Baba Yetu” theme (I didn’t mind; it’s a great tune!), and the concert closed with the theme from a TV show called ReBoot. (According to my quick Google search, in ReBoot, “Bob, a guardian from the Super Computer, helped by his friends Dot, Enzo, and dog Frisket, defend the digital city of Mainframe from evil computer viruses that seek to dominate the city and infect the entire net.” Sounds exciting! The piece certainly was.)

All told, the Wind Symphony avoided the temptation when playing popular music (and marching band charts) to just be loud. Instead, they managed to pull off some out-of-the-box selections with musicality that befit the Conservatory’s premier wind ensemble and entertainment value that made the program accessible to a broad community audience. It turns out my skepticism about the concert theme was unwarranted; the music was quite enjoyable.

The Wind Symphony’s next concert, which will surely have a markedly different atmosphere, is on Saturday, Apr. 18 at 8:00 p.m. The program will feature the premier of a new work by composer Steven Bryant, which the Wind Symphony helped to commission.