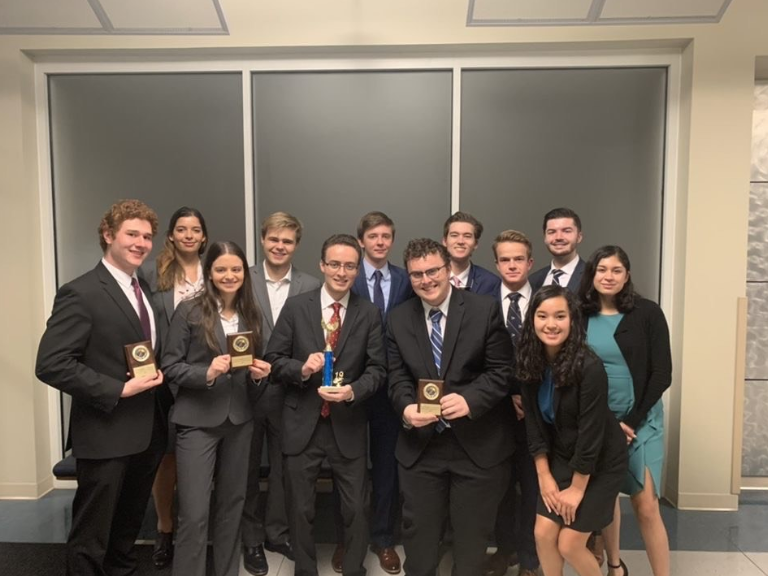 Gettysburg College’s mock trial team, “A Few Good Men,” finished their Fall semester season with high hopes that they could win a spot in the Opening Round of Champions after securing a placement through their first place win at the Lancaster Invitationals.

“In our time here we’ve never made it past regionals so it is a big goal,” Kevin Wright ‘20, said.

President of the club, Wellington Baumann ‘20, explained that the leadership had created a newer and stricter practice curriculum to better prepare the participants.

More recently, A Few Good Men received the funds they needed to continue improving the integrity and success of Gettysburg’s mock trial team. Each semester they receive about $1,500 funded by the Provost’s Office and the Student Senate.

Baumann continued to explain that the professionally printed case materials help improve the team’s overall presentation, which can “really make a difference in a competition.” The team, according to its leadership, is thankful for the funds as expenses can add up quickly at each competition.

“It’s been the best performing year so far,” said Baumann. “It’s already a good sign that we can make it into the Regional Tournament.”

The Regional Tournament will be February 22 and 23 held at Stevenson University in Maryland. If A Few Good Men rank high enough, they can qualify for the Opening Regional Championship in Lancaster, PA, March 6-8.

Baumann and Wright reached out to The Gettysburgian in hopes of shedding a light on the team’s recent success and making the club more visible on campus.

“What’s really good about Mock Trial is its a great way for students among all class years to work together,” explained Baumann. “It’s not like any other club. It’s a lot more work but at the end of the day there’s a lot more motivation.”

As of right now, there is only one team of twelve students representing Gettysburg College but with more recognition and success, the school could one day send multiple teams. The more team members would mean the greater resources and opportunities Gettysburg would have to foster future lawyers and law enthusiasts.

“It’s our hope that after graduation that Mock Trial is a more legitimate club on campus,” said Baumann.