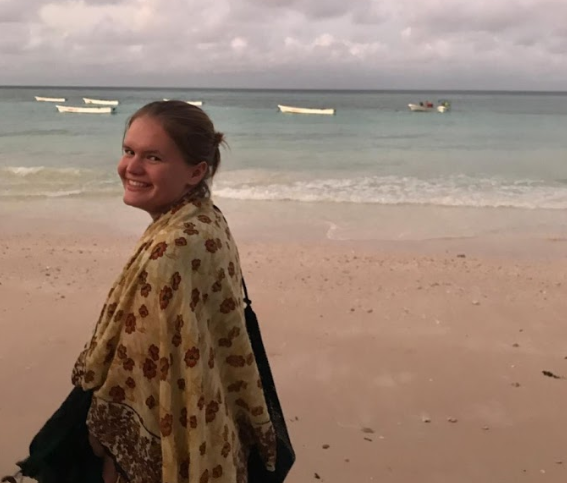 This semester, I’ve had the opportunity to swim with dolphins and whale sharks, I’ve watched lion cubs play on safari, and I’ve learned how to use a bucket bidet; however, the most memorable thing I’ve done this semester is snorkel on Chumbe Island. Chumbe is an ecotourism destination off the main island of Zanzibar, Unguja, with rainwater harvesting systems and composting toilets. They also have the most spectacular reef in Zanzibar. The day we went snorkeling on Chumbe was super rainy. The rain disturbed the sand on the seabed and clouded the water so that when we first jumped in, we didn’t see anything special. Then we dove down. Bright colors exploded before our eyes. We saw all types of coral: table, plate, you name it. There were so many colors: blue, purple, and yellow; I had never seen anything like it in my life. When we dove down further we saw the fish: angelfish, clownfish, trigger fish, we even saw a blue spotted ribbon tail stingray, and again, the colors were unbelievable. Some fish were bright navy and yellow, others were fuchsia and purple. It was hard to believe that these colors could exist in nature. I loved diving down as deep as possible and watching the life below. It was like I had access to a whole other universe. Sometimes, I’d pop up and realize I was alone. All my friends had been so engulfed by the reef that we had been separated, and had to swim to meet up again. None of us ever wanted to return to shore.

However, not all of reef was bustling with life. A large portion of it was bleached. The coral skeletons were stark white and the water was devoid of color. I knew it was only a matter of time before the rest of the reef was dead as well. The reef management team at Chumbe did their best to keep the reef pristine by removing coral-eating crown-of-thorns starfish and requiring reef-safe sunscreen, but those efforts wouldn’t do much to protect the reef from climate change. It’s devastating to think that a place brimming with life will be destroyed when the ocean temperature gets too high. It is predicted that most reefs will only survive for another twenty years or so. Our children will most likely grow up in a world without them. The coastal communities that rely on reefs for food and employment (communities that really haven’t contributed to climate change) will have to find other sources of income. If the major fossil fuel burning countries decided to stop burning today, we might save some of the reefs, but even so, the majority of them would die, and it would be our fault.

The Earth is resilient. It will bounce back no matter what we do to destroy it. Our world is not. If we want to save our planet’s ecosystems, as well as ourselves, we must change our habits and change them now. Our sadness and alarm must turn to action, not apathy. I’ve seen so much this semester: elephants, giant bats, baobab trees, and I’ve met the most amazing people. There is so much in this world worth saving. It’s time for us to try.

This article originally appeared on page 14 of the December 6, 2019 edition of The Gettysburgian’s magazine.