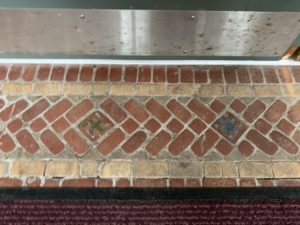 When I first toured Gettysburg College, I was told about Hillel and the interfaith organizations on campus, all of which interested me. Unfortunately, my guide forgot to mention the swastikas in Breidenbaugh Hall and Plank Gym. If you are confused or surprised, you are not alone. When I was first told about this I figured it was graffiti or scratched in, but no, these symbols of hate are all part of the design.

Breidenbaugh Hall and Plank Gym were both built in 1927. I have been told that, because this was before the Nazis and the Holocaust, the tiles are not antisemetic. This is inaccurate. The Nazi Party existed and adopted the swastika as its symbol in 1920, the same year Hitler designed his party’s flag. It is almost undoubtedly the case that the architect included the swastikas simply as an homage to the East Asian meaning, but to say that the other meaning of it did not exist yet is false.

The symbol usually has slight differences when used to represent different things but for the majority of the western world, there is no difference. Some of these use different terminology, but for the sake of simplicity, I will be using the term swastika. Very few people know the difference between the varied yet extremely similar cultural symbols that all resemble swastikas. My high school physics teacher used to say “if it looks like a duck, it sounds like a duck, and it quacks like a duck, it’s a duck.” While context is important, I would tend to agree with him in this case.

If the everyday American were to see these symbols, they would associate them with Nazism. If most people think that a swastika is a swastika, it can be reasonably assumed that when a swastika is presented it is meant to be hateful. We see this all the time with antisemetic attacks and vandalism. The perpetrators may have drawn the symbol incorrectly, but that does not mean that it is no longer antisemetic or a crime. Most people I know do not google whether or not something is actually a swastika when they see it. White nationalists and racists the world over use the swastika to promote hatred and incite fear in Jewish communities. We like to pretend that because the Holocaust is over, so is anti-semitism. In reality, anti-semitism is on the rise. Anti-semitic incidents in 2018 rose 99% from 2015. I have experienced more of it since coming to Gettysburg College than ever before. On top of it all, four times a week I go to class only to face a physical reminder of the suffering and slaughter of my ancestors. Gettysburg College does a lot for its students, and yet appears entirely indifferent to this appalling display of hatred. I have a very hard time imagining this happening to Christian students here.

It is hard to fully articulate how this makes me feel. It is more than offensive, and infuriating, it also makes me exhausted. .It is exhausting to have to constantly be asked why I believe what I believe. It is exhausting to have to justify my existence. It is exhausting to have to argue that the swastikas on campus should be removed. It is degrading and disrespectful. If you have to pull up google images to show me the difference in direction or curvature of swastikas in order to justify you argument, then you have already lost. Gettysburg has had the better part of a century to fix this and has not. The college claims not to tolerate hatred or bigotry of any kind, but apparently they are making an exception. Anti-semitism persists, partially due to the inaction of people who do not care about things like this. It may change over time, but, to quote journalist Mark Steyn, “the oldest hatred didn’t get that way without an ability to adapt.”