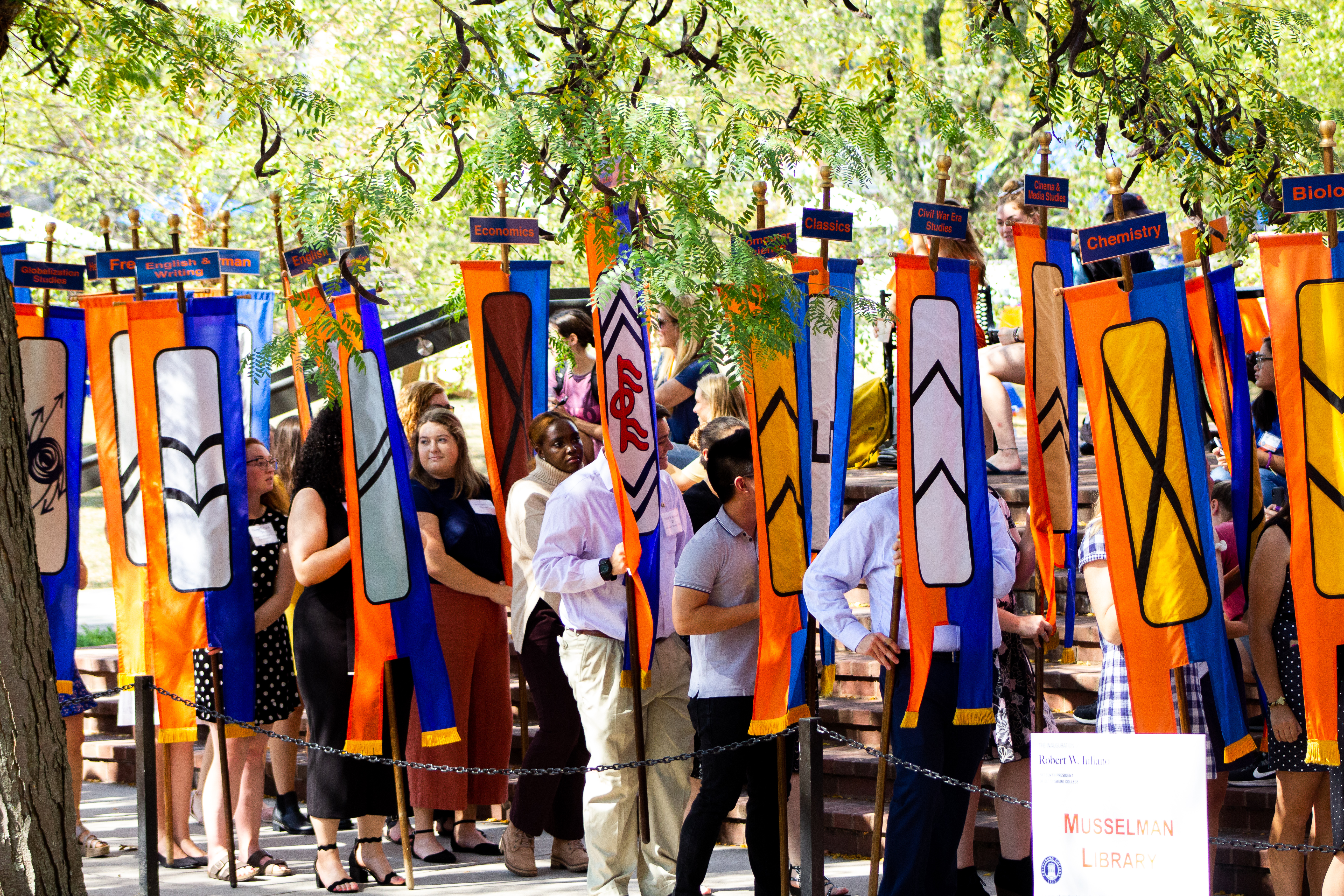 The Gettysburg College faculty is in the early stages of considering substantive revisions to the Gettysburg Curriculum, the core curriculum that has been in place at the college since 2004. While no specific changes have yet been proposed, the Academic Policy and Program Committee (APPC) has appointed a Curriculum Review Committee to consider possible changes, and the faculty spent its meeting on Oct. 17 in small group roundtable discussions to address several questions related to how the curriculum works.


Chair and Associate Professor of Philosophy Gary Mullen, who sits on APPC, is chairing the Curriculum Review Committee, which, in addition to several other faculty members and the two student representatives who sit on APPC, includes representation from both Admissions and Alumni Relations as well as the college registrar.
Mullen stressed that nothing has been decided yet and that his group’s role is to gather information and then make a recommendation as to whether to proceed, not to propose actual changes.

“The best thing we can do at this point is to create a process that is as inclusive and transparent as possible,” he said, noting that the prospect of curricular revision can understandably unnerve members of the faculty who fear their departments could face cuts or that their jobs could be on the line.

The impetus for this project came from the Chairs Council, which includes the department and program chairs from across campus, and has also been discussed by the Board of Trustees, which has pondered the notion of a 21st century liberal arts curriculum. The project then landed with APPC, which oversees the academic program. The Curriculum Review Committee is charged merely with performing a review, but based on the information gathered thus far through the faculty roundtable session and its early conversations, Mullen believes that a critical mass of faculty see opportunities to improve the curriculum in substantive ways.

Provost Christopher Zappe supports that effort and, in an interview, emphasized that he believes it is time to consider making structural changes.

“For me, while we have made minor adjustments, the last time there was a substantial revision was the early part of this century,” Zappe said. “Given where we are in this nation and in this global community, I think it’s time for us to consider what is essential for our students to lead engaged careers and lives.”

Before he came to Gettysburg, Zappe served as Dean of Arts & Sciences at Bucknell through a three-year process during which the college’s Curriculum Committee developed the “College Core Curriculum.” He said that he hopes to help lead a similarly comprehensive effort to examine the curriculum at Gettysburg.

“I would enjoy the opportunity to be a participant in the process as part of our shared governance system,” he said.

Ultimately, Mullen’s committee will issue a report in the spring, and, assuming APPC decides to proceed, an elected committee containing a member of APPC, representation from each of the three academic divisions (natural sciences, social sciences, and arts & humanities), and the Provost could begin work as soon as the summer of 2020 to begin to propose revisions, which would require approval from the full faculty. By the end of the 2020-21 academic year, changes could be approved and ready for implementation, Mullen said.

The last time Gettysburg substantively revised the curriculum, a curricular subcommittee made recommendations to APPC before submitting a motion to the faculty. The subcommittee began its work in the fall of 2001, the faculty approved the new curriculum in the spring of 2003, and the new curriculum was implemented in the fall of 2004. Only minor (though not uncontroversial) changes—such as renaming the former non-Western diversity requirement to “Global Understanding”—have occurred since the curriculum’s adoption.

“We were trying to get rid of the checkbox mentality. It never equaled our ambition.” – Jack Ryan, Vice Provost

Prior to assuming his current administrative appointment as Vice Provost, Jack Ryan served on the subcommittee that developed the Gettysburg Curriculum beginning in 2001. He said that the goal of the subcommittee was to “challenge disciplinary boundaries” so that students would not perceive the curriculum as merely a set of distribution requirements. That aspiration has eroded over the past 15 years, Ryan conceded.

“We were trying to get rid of the checkbox mentality,” he said. “It never equaled our ambition.”

Professor of Philosophy Steven Gimbel also served on the subcommittee from 2001 to 2003. He said that the group began by considering the broad question of what it means to be a liberally-educated person and worked from there to develop curricular goals.

“We thought that it meant more than the banal breadth and depth model that one usually heard and we thought that it would be a person who can approach problems through multiple lenses, who was engaged with the world, who could communicate effectively, who could connect dots, and who could be an effective citizen who was well-acquainted with the major trends of the time which we identified as globalization and the rise of science and technology,” Gimbel said. “It was from that abstract starting point that we then set about trying to design an educational program that would reflect our picture. That’s where the idea for the multiple diversity requirements, the discipline-specific writing requirement, the cluster, and the science, technology, and society requirements came from.”

Gimbel, too, suggested that the subcommittee’s ambition was not fully realized.

“I think—as is the case with most things in life—the record is mixed,” he said. “Some elements have succeeded better than others, some have received more buy-in than others. But the question of curriculum and the underlying question of what it is to be a liberally educated person ought to be a continual source of discourse.”

Professor of Music Marta Robertson served as co-chair of the effort and recalled a colleague telling her shortly after the revisions were approved that “changing a curriculum is like moving a graveyard,” a sentiment with which she identified after an arduous process to get the changes approved by the full faculty. In particular, she bemoaned the failure of a requirement that students create a learning portfolio throughout their time at the college in which they would collect artifacts from their various classes such as papers, artwork, pictures or videos of presentations, and other projects and, upon graduation, receive a curated trove of their work to share with potential employers or graduate schools along with their diploma.

“Changing a curriculum is like moving a graveyard.” – Marta Robertson, Professor of Music

“Now with mandatory assessment tied to accreditation a portfolio would have been so vital,” Robertson said. She added that the concept, which, at the time was part of the curriculum at less than 10 percent of institutions but now is a requirement at almost half (not including Gettysburg), “was really ahead of its time.”

“The snag,” Robertson said, “was getting faculty on board to understand that this was not an extra assignment to grade, but a place for students to reflect on their learning from courses and curricular goals.”

“There was no buy-in from the faculty,” Ryan added.

To Robertson, the lack of faculty buy-in was emblematic of the curricular revision effort more broadly, which is part of why she believes the effort did not achieve its full potential.

“There was never enough faculty buy-in, even though the curriculum subcommittee worked for two years,” Robertson said. “In general many faculty believed the curriculum was ‘too complicated’ which compromised good faculty advising.”

Zappe, who came to Gettysburg in 2010, six years after the Gettysburg Curriculum was implemented, views faculty buy-in as a central goal central goal for any changes that would be made to the curriculum this time around.

“I want the faculty to be engaged in what we do,” he said, adding that finding meaningful ways to engage students would also be one of his priorities.

Mullen shares that goal and said that surveying both students and faculty will be forthcoming parts of the process. He also said that he is working with the Provost’s Office to use funding from a Mellon Foundation grant to host presenters at future faculty meetings from other institutions to better integrate diversity into the college curriculum.

While Associate Professor of Music and Chair of the Faculty Council Jocelyn Swigger said at the faculty’s most recent workshop that this process is merely to review the curriculum, not necessarily to revise it, Zappe signaled that he thinks change is coming.

“I think we’ll move forward,” he said, though he cautioned that the process will likely take at least a full academic year. “This will take time.”

Robertson added that the faculty has an exciting opportunity but needs to recognize and commit to engaging the complexities that reshaping the college’s academic program requires.

“There’s such a great opportunity with this current curricular revision to really revise the curriculum, rethinking it philosophically, for changing students, demographics, political times, and way more complex world questions,” Robertson said. “But given the complexities of moving a graveyard, it is much easier to apply bandaids.”

This article originally appeared on pages 4-6 of the December 6, 2019 edition of The Gettysburgian’s magazine.