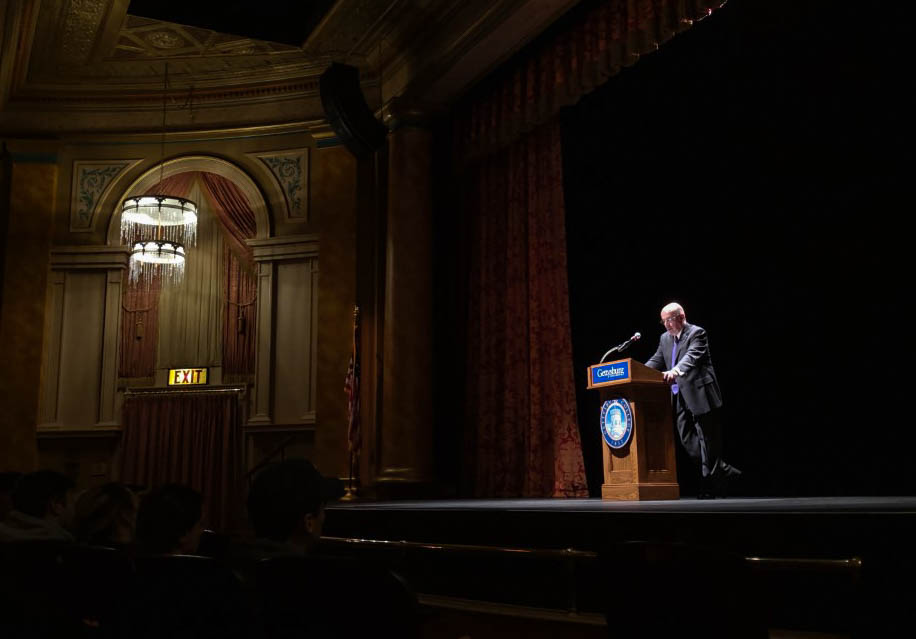 The 58th Annual Robert Fortenbaugh Memorial Lecture at the Majestic Theatre, held on Nov. 19 to commemorate the anniversary of the Gettysburg Address, was delivered by Brooks D. Simpson, an ASU Foundation Professor of History at Arizona State University.

The Fortenbaugh Lecture series began in 1962 with Bruce Catton as the inaugural speaker. Since then, speakers such as Simpson have come to Gettysburg to lecture to the “literate general public without abandoning solid scholarly moorings,” according to the Gettysburg College Civil War Institute website.

Simpson is a veteran writer with five books and countless papers and essays largely revolving around the reconstruction period immediately following the closing of the American Civil War. In recent years, he has focused particularly on the presidents that oversaw the reconstruction period, chiefly President Ulysses. S. Grant, the main subject of his talk, titled “The Rollercoaster Reputation of President Ulysses S. Grant.”

Director of the Civil War Institute Peter S. Carmichael introduced Simpson as a fair and honest writer who “takes Grant on Grant’s terms.”

Simpson’s major points involved the growth of the myths surrounding Grant, the historians that backed them up in scathing books and reviews, and what he believes is the truth.

Grant was famous during the American Civil War for being a general that ultimately produced the results that President Abraham Lincoln wanted against the Confederacy.

However, with these results came the bloody price of the war. Grant became known as a butcher among historians over the years due to his high casualty rate in his campaign against the Confederacy. These ideas were quickly followed by vicious tales of Grant being a drunk and largely incompetent.

Despite these growing negative sentiments Grant became popular by the end of the war and was eventually elected president.

Simpson mentioned that while Grant’s cabinet was embroiled in several scandals that ultimately reflected harshly on Grant, evidence shows that most of these scandals began and operated well before Grant was ever in charge.

“Presidents before 1901 fall victim to false historical assessment,” Simpson said. He continued, saying that in the 1900s, “not all Americans were willing to give good service to the remembrance of Grant.”

He also referred to the increase of Grant’s popularity beginning in the 1980s, when publications began to be released by historians that showed the president in good light. The idea that Grant was pushing reconstruction was the large push for popularity towards the defamed president.

“Grading Grant in the middle of the pack of all the presidents is fair,” Simpson said, further citing that Grant’s stances on ideas and movements such as women’s rights, Native Americans, and the effects of reconstruction on African Americans drag him down a large portion.

Relating back to the modern era, Simpson said that presidential popularity often follows a pendulum and that we currently sit in a spot where Grant is at his highest.