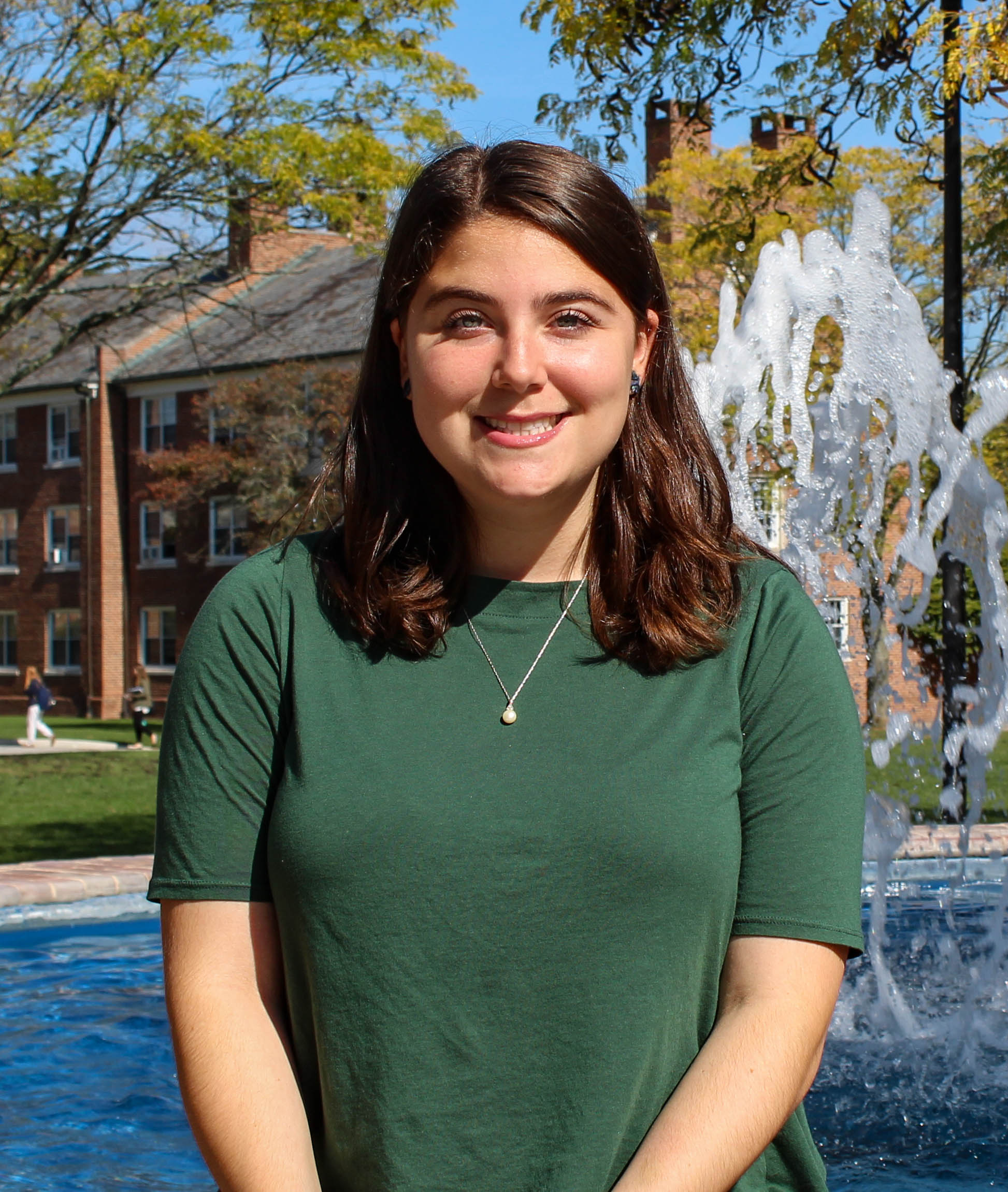 A recent 45-minute conversation that took place in the first-floor lobby of Schmucker Hall well past 10:00 p.m. was, nonetheless, interspersed with greetings from no fewer than eight members of the Sunderman Conservatory community. Connecting with so many people — students and faculty mentors alike — has been among the most valuable parts of Brooke Maskin’s time at Gettysburg College.

A senior music education major, Maskin says the sense of community the Conservatory cultivates mirrors her broader philosophy of what music education can do. Clarinet is Maskin’s principal instrument, but she has also participated in a range of ensembles from Gamelan Gita Semara, a Balinese gamelan angklung orchestra, to the Bullets Marching Band, with which she serves as drum major. She has also participated in choir and has perfect pitch, a fact she tends not to share. The thread that runs through each facet of her participation in the Conservatory is a sense of camaraderie and shared sense of purpose with all involved.

“The community that we have here is built around supporting each other musically and in a human way,” she said. “We’re really here to strive, to have all of us grow and become our own leaders.”

Music has long been a communal activity for Maskin. She grew up in a family that gathered around the piano to sing, took piano lessons from her grandmother until she was in high school, and now studies in a Conservatory atmosphere that is built on friends motivating and supporting one another. Such experiences imbue Maskin’s drive to share music with others as a teacher.

“[My goal is] to bring people closer together in ways that they couldn’t imagine and to give them an experience that is creative, is powerful, is reflective, and makes them more well-rounded,” she said. “In my future classrooms, I hope I can foster that same type of atmosphere and community with my students. The most important thing is to make them feel safe and included … and validated.”

Maskin’s experience in the Conservatory reflects that aspiration towards well-roundedness. In addition to completing the music education major, which loads 32 courses into seven strenuous semesters that she conceded “can be quite overwhelming,” Maskin is a Spanish minor.

This semester, she is working through the Center for Public Service on a course cluster project to meet the Gettysburg Curriculum’s interdisciplinary requirement in which she teaches songs and games to children while their parents take English classes in the Casa de la Cultura program. While she regrets not having had the chance to study abroad in a Spanish-speaking country, Maskin said that she hopes the opportunity to work towards her life goal of Spanish fluency while honing skills in cross-cultural education will help her find a job in a school where Spanish is prominent.

On Nov. 24, Maskin will perform her senior recital, which she said has only one “Spanish flare moment,” on clarinet. The program, entitled “Fall Into Your Senses,” includes works by George Gershwin, whose “Rhapsody in Blue” was among the first orchestral pieces Maskin heard as a child, French composer Paul Jeanjean, German operatist Giacomo Meyerbeer, and Hungarian clarinetist Béla Kovács.

Maskin said that, in the program notes for her recital, she has framed each piece around the lyrics to “Annie’s Song” by John Denver, a piece that brought her late grandfather joy during his final days and means a great deal to her.

“It’s surreal to be knowing that it’s going to happen,” she said. “I’ve attended so many recitals and just been blown away by the outstanding performances other juniors and seniors have given, and now it’s like, ‘Wait a minute! Now it’s my turn to do that.’ Hopefully, I will muster up everything I’ve got.”

A version of this article appeared originally on page 18 of the October 31, 2019 edition of The Gettysburgian’s magazine.