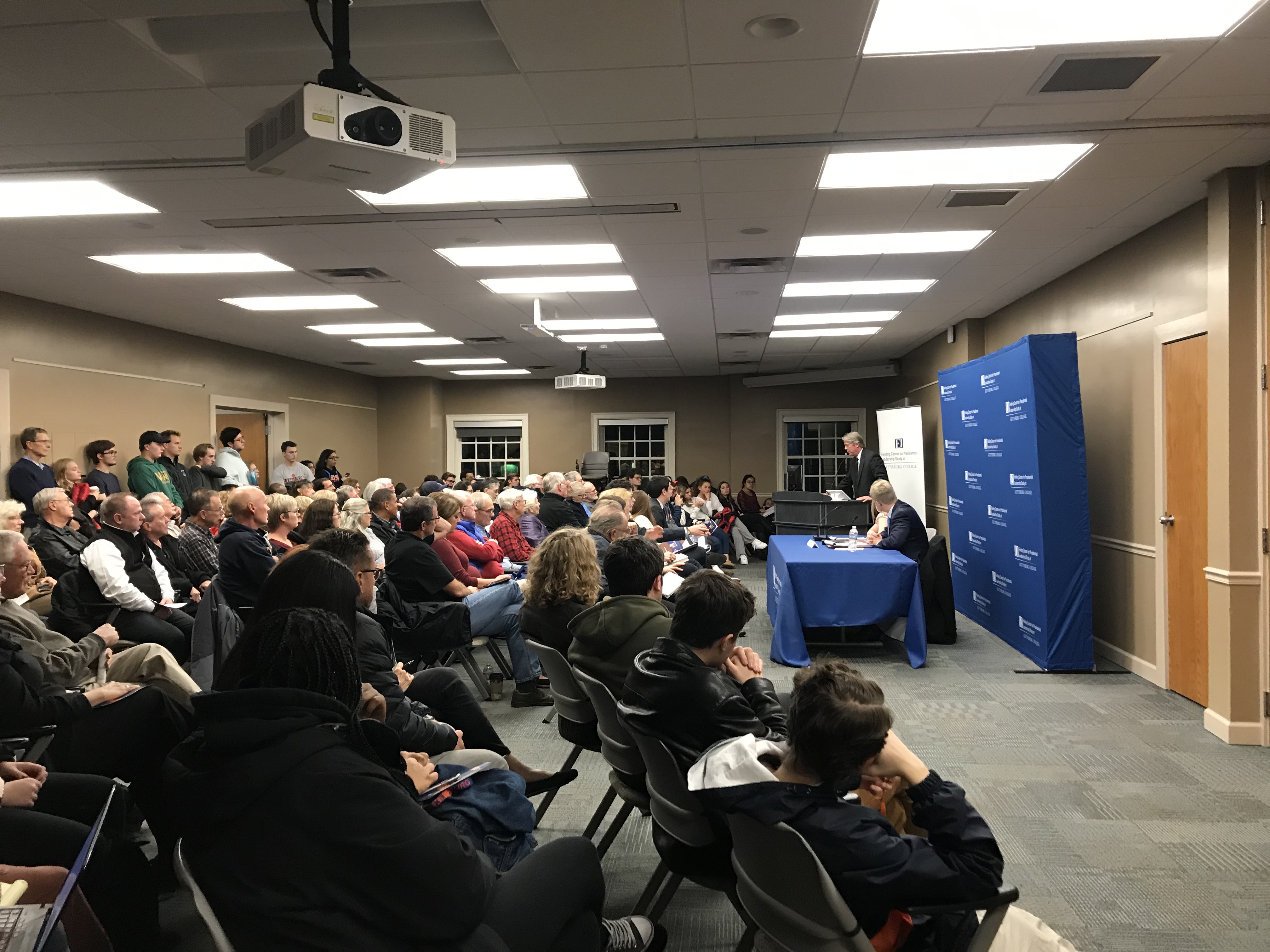 Over 120 people spilled out of CUB 260 to listen to the head Washington Correspondent from CBS speak about his life as a journalist covering the President of the United States. The Fielding Center hosted Major Elliot Garrett this Tuesday for the lecture “The Trump Presidency: Partial Productivity Amid Impatient Belligerence.”

Almost immediately after Nick Arbaugh ‘20 introduced Garrett, he opened the floor to questions as he mostly wanted to talk about what the audience was interested in; a big topic was Trump and his relationship with the press. Helen Winters, ‘20, and Thomas Potter, ‘20, two Fielding Fellows, also had questions prepared to help guide the conversation and give the audience time to formulate their own questions. Garrett prefaced the discussion with this:

“I don’t want you to know where I’m coming from,” Garrett said on being a political journalist. “My job is to tell you what happened. Everything else is up to you.”

One audience member asked Garrett about Trump’s war on the media, referring to Trump’s habit of calling many news organizations fake and evil. The crowd looked surprised when Garrett immediately said that Trump actually loves the media.

“He craves us,” he said. “Trump’s criticism of the media is not only a slogan but a personal sense of mission,” and continued to say that while Trump has a lot of hateful rhetoric directed at the press, he knows how much he needs the press for publicity.

When it came to the one-on-one time Garrett had with Trump, he called the president quiet and respectful, as well as a respectful listener — so long as the reporter knows what they want from the conversation with him; otherwise, the President will dismiss anyone without an agenda. Garret claimed that Trump has many strategies on how to read a room as a way to calculate the power dynamics.

Garrett also made an uncommon comparison between Trump and President Lyndon Johnson. Though they had many differences, mainly how they conducted themselves publicly, both had a way of physically and psychologically taking control of the room. Coincidentally, they both stood at 6’3” and demanded attention and respect in any room they entered, according to Garrett.

Although Garrett seemed to love his job he said, “Sometimes I wish I was reading this history and not making it because I’m really tired,” followed by the fact that he had to drive back to Washington, D.C. that night to get home for work the next morning.

This past summer, Garrett published a book titled Mr. Trump’s Wild Ride: The Thrills, Chills, Screams, and Occasional Blackouts of an Extraordinary Presidency, which both Liberal and Conservative news organizations called it one of the most journalistically written books about the Trump presidency, according to Garrett.

“It’s the best political book I’ve read in a while,” Professor of Political Science Shirley Anne Warshaw said. “I couldn’t put it down.”