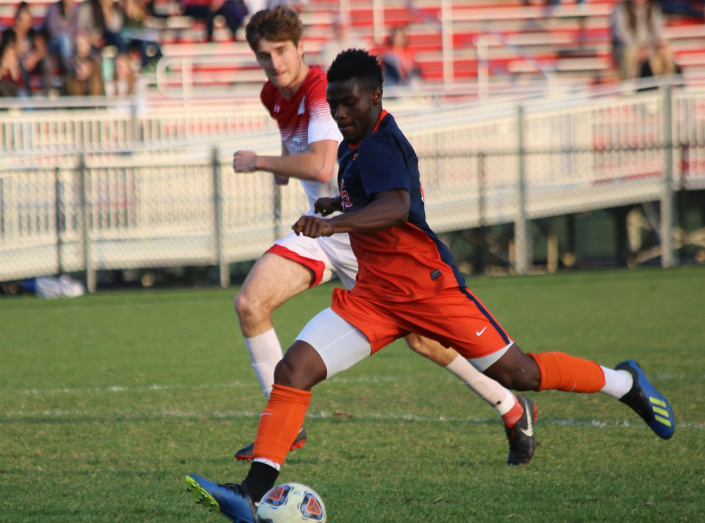 In four of the last five seasons, the Gettysburg College Men’s Soccer team has lost a close game to Johns Hopkins University, all by only one goal.

The Bullets were able to capitalize on an early mistake by the Johns Hopkins goalie. After making a diving save, Xander LeFever attempted to clear the ball from the box but instead kicked it straight to sophomore Oladayo Thomas. Thomas was able to sneak past a defender and score only seven minutes into the game.

The Bullets were able to hold off Johns Hopkins, but in the 23rd minute the Blue Jays were awarded a penalty kick, which they were able to convert into a goal, tying the game at one goal apiece.

Beginning in the second half, the Bullets had a quick opportunity to retake the lead on a free kick from outside the box, but the Johns Hopkins keeper was able to save it.

Shortly after, the Blue Jays scored after they connected on a crossing shot, bringing the score to 2-1. Despite leading in shots 9-2 and leading in free kicks 5-0 in the second half, the Bullets were unable to convert any efforts on target into goals.

After this game, the Bullets remain ninth in the United Soccer Coaches Division III Mid-Atlantic Region poll. At this point in the season, the Bullets are 5-3 overall, while going 1-1 in Centennial Conference play. Franklin and Marshall is ranked first in the poll, with Johns Hopkins remained second.

Gettysburg has tallied three shutouts this season and ranks tied for third in the conference in assists.

The Bullets will look to bounce back against McDaniel College on Wednesday at 4:00 p.m. The Green Terror are 9-1 overall, but, like the Bullets, are 1-1 in conference play.