“Artful Nature” and “Getting There” Make Waves in Schmucker Art Gallery 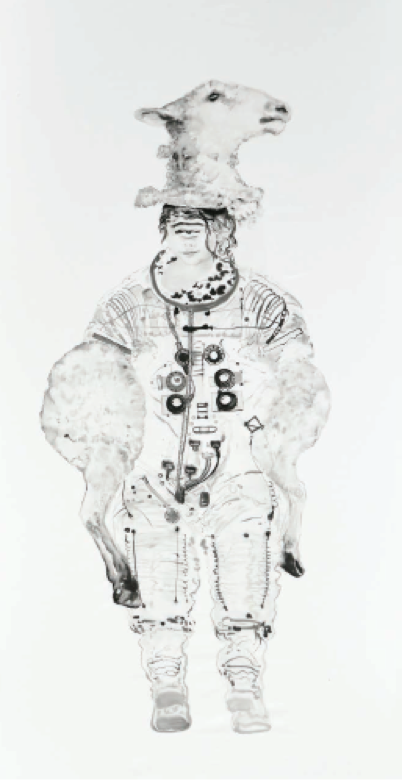 I push through the doors of Schmucker Art Gallery into a world of chilled, silent, and beautiful respect. There are two functioning sides of the gallery currently: Artful Nature and the Legacy of Maria Sibylla Merian curated by Emily Roush (2021) and Shannon Zeltmann (2021), with direction from Professor Felicia Else and Professor Kay Etheridge, and Getting There featuring art by Andrew Ellis Johnson and Susanne Slavick.

In the Getting There exhibit, practically every inch of every wall is covered with modern works of art surrounding immigration and other political and social issues. Johnson’s works are all in black and white, and feature lifeboats, raging seas, travel scenes, and traditional Hispanic figures in Día de Los Muertos makeup. As a viewer, you can feel the pain, struggle, and emotional turmoil that immigrants go through via Johnson’s works. One image in particular stands out. It takes up almost an entire wall by itself and features again subjects wearing traditional Spanish makeup, but they are riding camels and wearing scarves like those worn in the Middle East to protect the bodily orifices from wind and sand. These figures are imposed over drawings of migrants working in fields. It is a bold political statement referring to a remark President Trump made in regards to terrorists sneaking into the United States on caravans. It is a horribly gorgeous drawing, and speaks volumes about the current state of relations between the United States and the rest of the world. Alongside the dark, emotional works created by Johnson, Slavick’s works have life jackets in almost every work. It is a statement about how difficult it is to legally come to the United States, and how many immigrants lose their lives either through natural disaster or making the journey across dangerous seas. She even has one work of a life jacket that is made entirely from mud, dirt and silt, materials commonly found washed everywhere after disaster strikes. Getting There opened September 4th and closes on December 6th, 2019. This exhibit was supported by the Interdisciplinary Studies Program, Justice Studies, EPACC, and Gettysburg College.

Separated by only half of a wall but physically worlds away from the social, political, and immigration statements created by Getting There, Artful Nature curated by Roush and Zeltmann is serenity at its peak. It features some of the first in-depth drawings of our natural world done by Merian in the 18th century. A pioneer of art and science, other artists and scientists came after Merian and copied the aesthetic of her work. In the exhibit, butterflies, leaves, branches, trees and flowers seem to jump off the page, drawn in exquisite detail. For more detail on this exhibit, its gallery talk with Roush and Zeltmann will be held on September 27th at 12 pm; food will be provided. On October 4th at 12 pm, Professor Kay Ethridge will speak about the exhibit, again with food provided. This exhibition was made possible by a generous gift by Betsy and Bruce Stefany class of 1971, and loans from Professor Kay Etheridge. This exhibit closes on November 12th, 2019.

I spoke to Dr. Shannon Egan, the Director of Schmucker Art Gallery. She explained the significance of the exhibits, as well as how each work of art is accompanied by a poem, book excerpt, or description of its origin and importance. It is clear that the entire art department is bustling with enthusiasm about both of these displays; and it’s no wonder. Even when I went in to see the exhibits around lunchtime, it was bustling with students who had caught word of the works on display and come to see for themselves. So far, Artful Nature and Getting There have attracted a lot of campus attention, and will most likely to do so until their closings in December and November, respectively.