New Club Holds Panel on Inequality in the United States 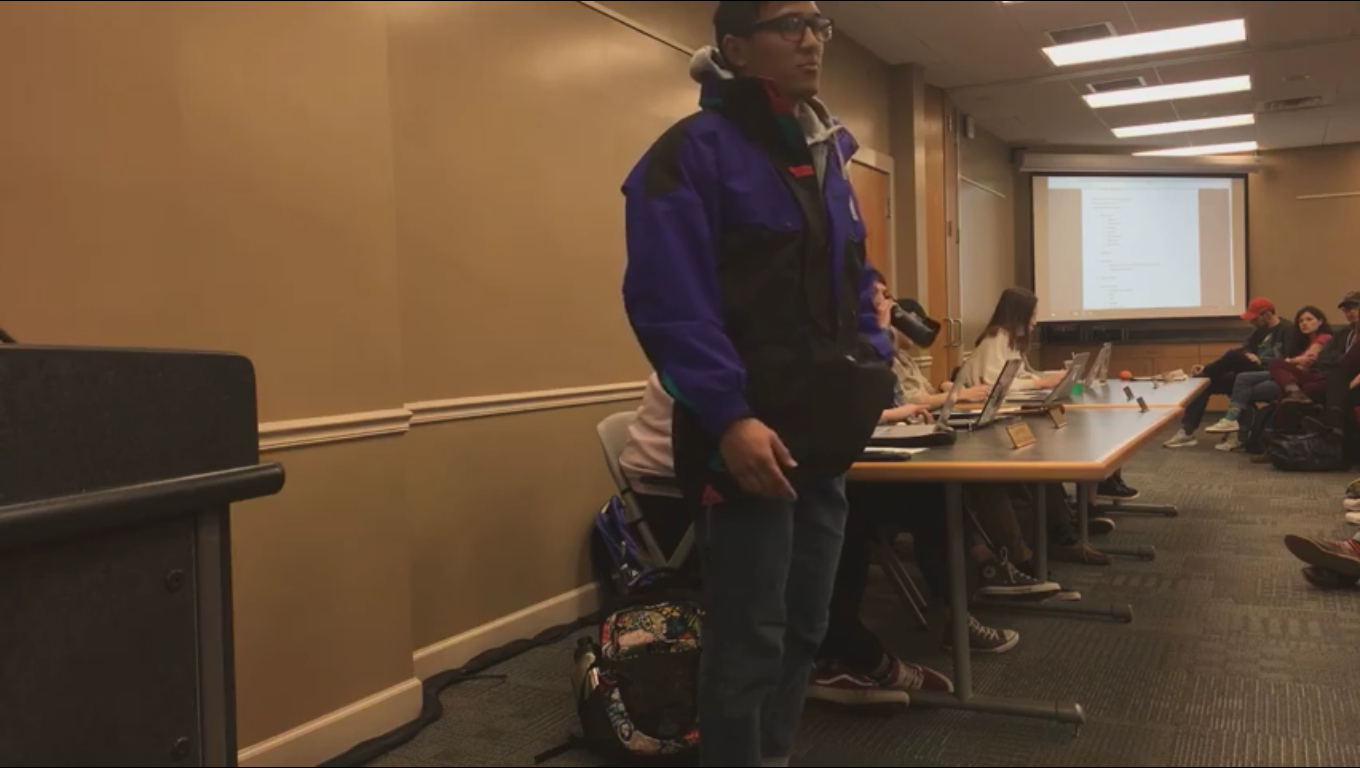 Last Thursday night in Mara Auditorium, a new club called The Half That’s Never Been Told held an introductory event entitled “Addressing American Inequality and An Introduction to a New Academic and Philanthropic Club.” President Tristan Chen ‘20 and then-Vice President David A. Roskos ‘20, who is now the club’s Community Service Coordinator, hosted the first club meeting, which was co-sponsored by Phi Gamma Delta and Sigma Alpha Epsilon. Chen, diversity chair of Phi Gamma Delta, said he hoped to spark conversation between Greek life and the cultural clubs on Gettysburg’s campus. He ended up comparing himself to Emmett Till, offending the room.

During the lecture, Chen expressed his experience with racism in the United States. While telling the story of an instance of a group of white men calling out the n-word in his direction, Chen stated, “And in that moment I felt like Emmett Till.” Many people in the room immediately raised their hands to object, including the club’s advisor, Dr. Scott Hancock, Chair of the History department and Associate Professor of History and Africana Studies.

In a subsequent email to The Gettysburgian, Chen said that he did not intend to “compare my experience to Emmett till [sic]. I just wanted to share my experience encountering racist Trump confederates and wanted to make people aware that racism still exists and is a major problem in this country.”

The floor then opened up and students shared a microphone to address the club’s intentions, Chen, and other students in attendance. Students asked why no women or representatives of the cultural groups with whom the club wants to connect were on the executive board. Others were upset at Chen for making the comparison to Emmett Till and trying to speak for the black community and other communities that he is not a part of. A few students, however, defended Chen, including Lloyd Williams ’22 and Brian Brady ’20, both of whom contended that Chen’s intentions were good and improvements will be made to the club.  A few more hands raised and voices called out, but Chen pushed forward and the meeting continued. He talked about injustice in America towards all people of color and members of the LGBTQ community, and the brutality of American colonization.

Williams reached out to The Gettysburgian to show his support and said, “I’m a freshman African-American first gen student who attended the meeting… I want to say that I’m very happy to see an attempt to connect the two groups who have more in common than they think. I appreciate Tristan’s vision to bring the two demographics together for a collective gain.”

Brady, a Phi Gamma Delta brother, also supported Chen and said, “We need to continually develop how we structure discussion with the help of BSU, LASA, and other multicultural groups to make our meetings as productive as possible.”

Brady did agree that the first meeting was a rough start, but has hope for the future.

Later that night, after Chen’s lecture of America’s injustice, Roskos spoke on the philanthropic goals for the club. He began by stating, “As someone who is not a person of color, I cannot speak for the minority groups on campus and cannot speak to their experiences. I am here to learn, encourage conversation between groups on campus, and promote philanthropy.” 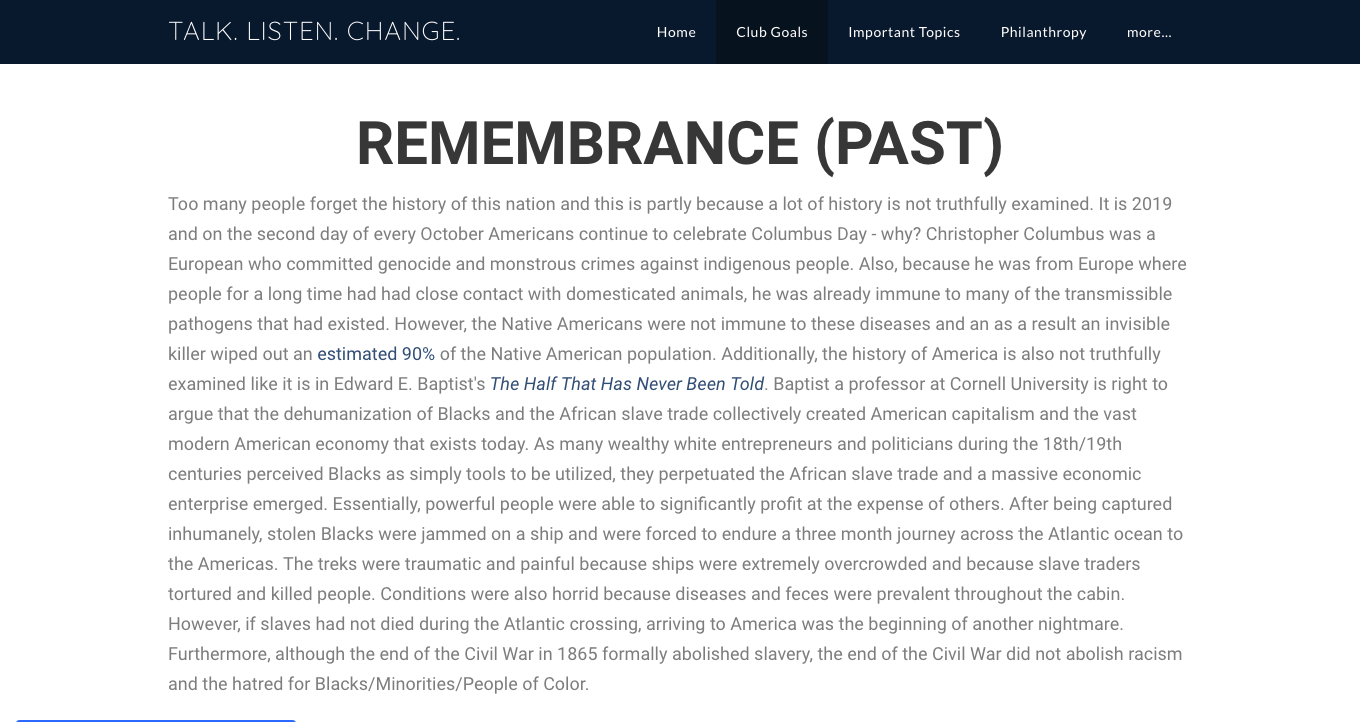 He then outlined the club’s mission. Chen had originally presented the club to Student Senate as an academic and philanthropic organization and did not mention his or the club’s affiliation with the Greek community. Currently, the group is raising money for ThriveDC, an organization fighting the hunger crisis and homelessness in DC. Their first mission of active philanthropy is to sort food cans at a food bank in Mechanicsburg, PA. Multiple students expressed their confusion and concern about the disconnect between Chen and Roskos speeches. One general sentiment that several students in attendance addressed was how the food drive and Chen’s thoughts were aligning into one organization.

Later that night, Hancock sent an email to a few hundred students through the email aliases of the Office of Multicultural Engagement (OME), Black Student Union (BSU), and Latin American Student Association (LASA), apologizing for not advising Chen to speak and listen to those organizations beforehand. He said, “I need to ask for your forgiveness on two counts: for contributing to this kind of problem (which costs you time, mental effort, and emotional energy) by not intervening sooner with this club, and for not apologizing to you all this evening as well… I am deeply sorry.” He also congratulated every student who stood up and spoke that night. “You … were simultaneously brilliant and considerate.”

Originally, after the event, Chen told The Gettysburgian that “The night went exactly as I planned and I am very happy to have started the conversation.”

Later, Chen sent an email to The Gettysburgian that said, “After receiving the constructive criticism last night, I realize that there is a lot I still have to learn. Despite my experiences with discrimination, I am not Black and I have no idea what it truly means to be Black. I have much to learn and I should have from the start communicated with multicultural groups on the campus. I do not want to be discouraged or demoralized by this, rather I want to use it as a learning experience. The outcome of the event last night motivated me to work harder and it motivates me to work with BSU, OME, and LASA. It is clear that there is a division on campus. I am looking forward to working with these organizations throughout the rest of the semester and to create a more diverse/inclusive environment here at Gettysburg College. That is really all I want diversity and inclusion. I am very excited because I believe there is potential here.”

Chen also sent out an apology to students, asking them to “Please exclude Crawford Oswald, Austin Roskos, and SAE from the event. Their intention was to be involved with philanthropic work and community service only, not to be involved in the educational panel.” He went on to apologize for offending the members of the audience, saying “I should have contacted and worked with multicultural [sic] groups here on campus first, before trying to address such an issue. I should have contacted and worked with Professor Hancock beforehand. It was not my place to try and talk about such issues. My intention was only to bring people together.”

Roskos sat down with The Gettysburgian the day after the event to explain his plans to help recalibrate the club. He said, “I wasn’t aware of what he [Chen] would say and know that neither of us has the right to speak about others experiences which is why I am stepping down as vice-president to be the community service coordinator. I believe someone who can speak for our minority groups should have leadership and that person is not me.”

Many students still feel conflicted over the club’s intentions and how they plan on proceeding. For a while, a multitude of students and clubs have talked about integrating cultural clubs more and making a connection with different types of organizations on campus. Many became frustrated when now suddenly, there was an intersectional club that would give Greek life the credit and not the cultural groups who have been pursuing this issue such as the “Let’s Talk About It” series, which seeks to “bridge gaps between clubs, get new perspectives, and provide a safe space for open dialogue, much-needed conversations, and free-thinking,” its advertising materials say.

Quyn Israel ’20, who attended Thursday’s event, addressed this issue and said, “I think we need to hold all groups accountable for why our clubs are not intersectional right now and continue this conversation that was started tonight.”

Editor’s Note: This article was amended at 5:29pm on April 16th to better reflect Scott Hancock’s sentiments in his email. (-G. Mangala)