Breaking the Mold at the 4th Annual Women of Distinction Dinner

On Thursday, March 28, the Office of Multicultural Engagement (OME) and the Women’s Center held the Fourth Annual Women of Distinction Dinner in the Atrium. This dinner and awards ceremony aimed to “honor and recognize the achievements of outstanding women, femmes, and gender-fluid individuals in our community,” according to an email by Valentina Cucuzza, Violence Prevention Coordinator and Director of the Women’s Center.

For the event, the Atrium was decked out in purple, a color internationally associated with women’s rights, having roots in the suffragette movement. A large projector screen in the room cycled through images and brief bios of empowered women, from Angela Davis and Sandra Day O’Connor to Ava DuVernay and Laverne Cox. President Janet Morgan Riggs also had a slide in the rotation. 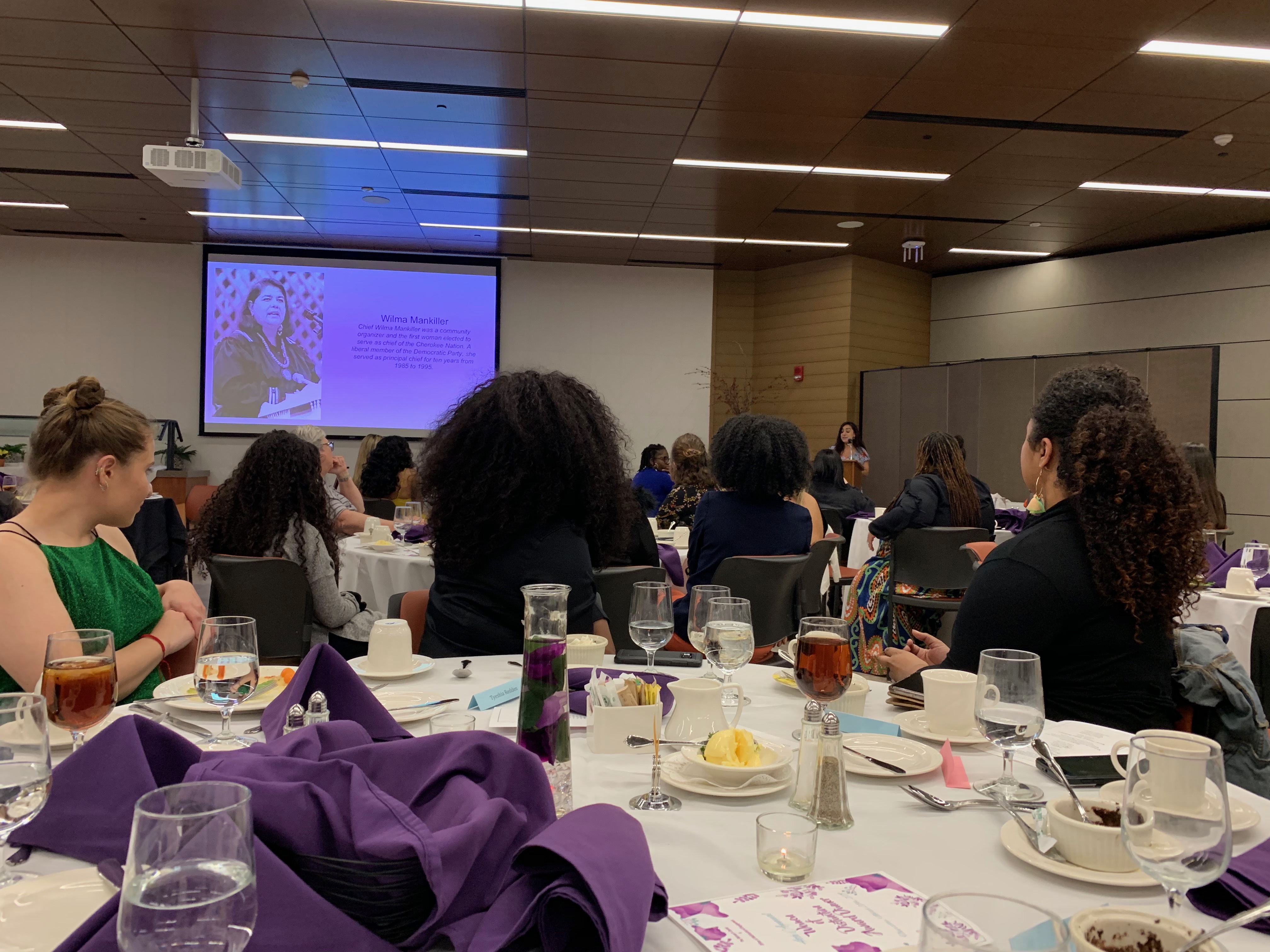 Wilma Mankiller was one of the inspiring women featured on the slideshow at the Women of Distinction Dinner (Photo Maddie Neiman/The Gettysburgian).

Around the edges of the Atrium, posters featured “Change Making Women” on campus, including Lindsey Ukishima ‘20, Mariam Martinez ‘21, Marina Fleites ‘19, Caoilainn McKenna ‘21, Hera Molina ‘22, and Makkah Matthis ‘19. These and other spotlights on bold Gettysburg College women can be found on the Resource Center’s Instagram.

For the dinner portion of the event, attendees were offered a salad, an option between chicken, fish, or vegetarian lasagna, and a brownie dessert.

Monique Gore, Director of Multi-Cultural Programming and Outreach for the OME, gave the opening remarks for the evening and introduced student performer Jordan Knox ‘21. Knox performed an original spoken word poem called “Another Poem about Hair.” This piece told a story of self-discovery through hair, a symbol that is often majorly attached to the identity of black women, according to Knox.

“My hair still isn’t perfect. I’m not perfect,” said Knox, who explained that she is still working toward her own goals and journey of self-discovery.

After Knox’s performance, the first round of awards were announced by student employees of the Women’s Center. First, the Hidden Figures Award, aimed at recognizing and honoring members of Gettysburg’s support staff, was presented to Patricia Braun and Samantha Isherwood ‘00.

The Emerging Leadership Award, which recognized first-year or sophomore leaders on campus, was presented to Melanie Pangol ‘21 and Mariam Martinez ‘21. Pangol and Martinez, along with Anna Perry ‘21, accepted the next award, the Outstanding Organization or Group Award, for their radio program, Voice of a Generation. Mariam Traore ‘21, another founding member of the group, was not present but was recognized along with her peers.

Before the final awards were presented, Keynote Speaker Kelly Fryer took the stage. Fryer became the “first openly queer candidate for governor of Arizona” when she ran in the 2018 Democratic primary, according to the event’s program. Currently, Fryer leads the “largest racial justice and gender equity organization” in Arizona and “serves on the advisory board of [the University of Arizona’s] Eller Social Innovation program.”

Fryer’s daughter, Emma, is an alumna of Gettysburg College.

Interested in economic, racial, and social justice, Fryer ran for governor of Arizona on a platform of human rights. Her campaign “broke the mold,” as she described it.

“Breaking the Mold” was Fryer’s theme for her presentation during the Women of Distinction Dinner. According to Fryer, every woman, person of color, queer person, or individual living on the margins must break the mold in order to succeed “because the mold doesn’t look like us.”

Fryer encouraged attendees to stand if they had ever been told that they could not do something — because of their gender, race, socioeconomic status, or other part of their identity — and then encouraged them to remain standing if they did it anyway. Nearly the entire room was on its feet.

During her presentation, Fryer shared three key principles to successfully “breaking the mold.” First, she advised, “Give yourself permission.”

Fryer told attendees not to wait for others to allow them to pursue their dreams or courageous ideas, especially when those dreams and ideas challenge the norm or breed opposition.

“Give yourself permission to do it because no one else is going to,” said Fryer.

Next, Fryer encouraged, “Bring your truth.”

Fryer, who married her wife after the U.S. Supreme Court legalized same-sex marriage in a historic 2015 decision, never ran from being recognized as a queer candidate.

“Dare to be your authentic self,” said Fryer. “I believe we win just by that because truth is something we’re hungry for today.”

“The world needs us,” she continued. “If there is a future, it looks like us.”

Finally, Fryer told attendees, “Have so much fun.”

One of her goals in running for office was to “take the fear out of it.” She wanted to encourage other strong, “good” people to run for government positions and not fear the process.

“What’s the worst that could happen?” Fryer asked. “For me, the worst thing would be not running at all.”

Earlier in her speech, Fryer asked Gettysburg students, faculty, and staff to think of a “bold, new thing” that they wanted to accomplish. In her final remarks, she concluded, “Whatever bold thing it is you’re dreaming about — just freaking do it.”

Caitlin Lindsay, Assistant Director of the Office of Student Activities and Greek Life, won the Woman of Distinction Award for faculty, staff, or administrators.

“It’s really humbling,” said Lindsay, “Incredibly flattering. So many people could have gotten it, and I would’ve been standing up there clapping.”

“We have so many amazing, amazing women on this campus,” agreed Knox, who praised the event as a way “to pull us together and to honor those people.” 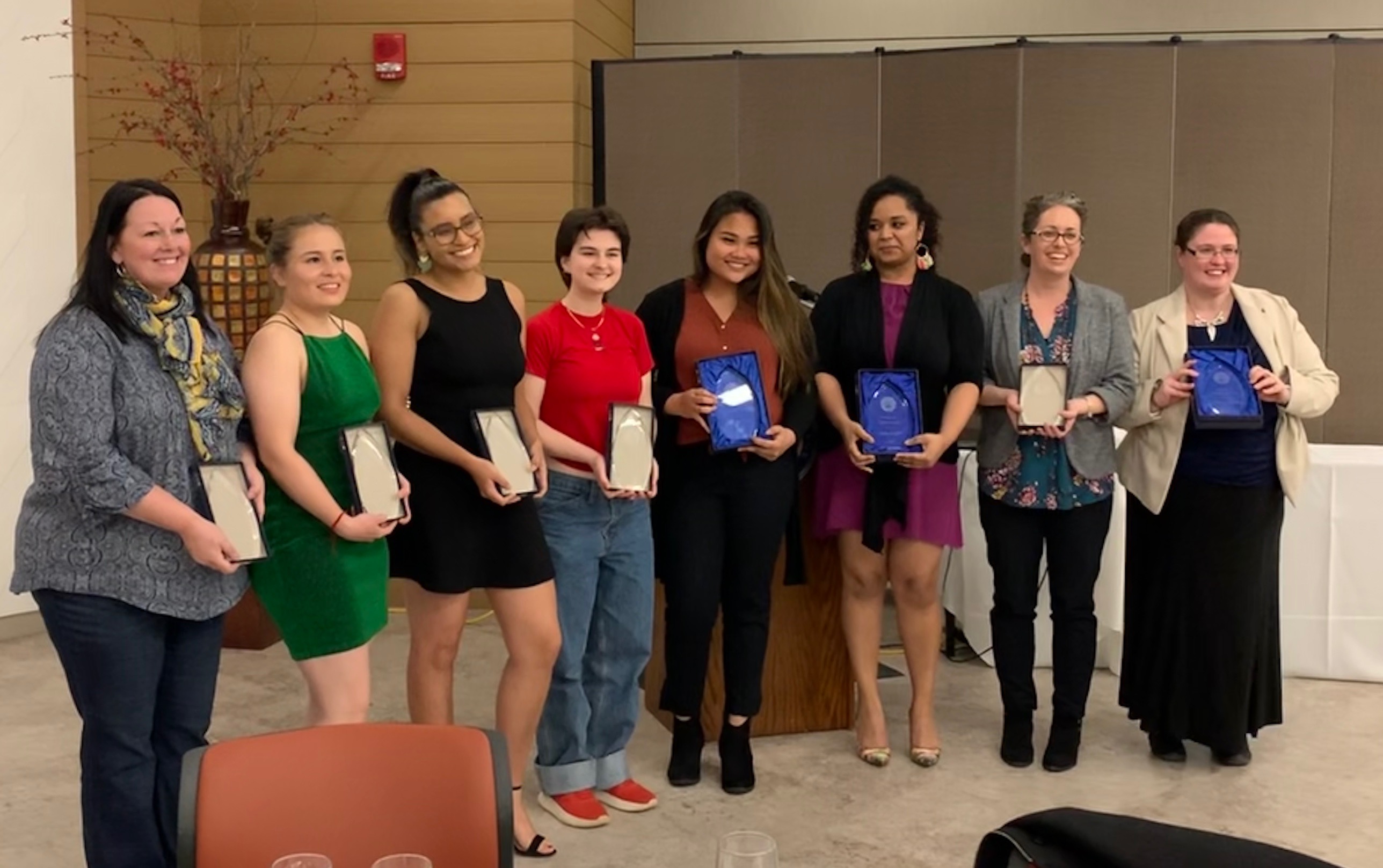 At the end of the dinner and ceremony, Valentina Cucuzza thanked all those that worked to make the event successful and congratulated all of the nominees and winners. Her closing words concluded an evening of recognizing and celebrating the empowered, bold women in both the world and our campus community.