X-SIG Series: An Introduction to Photonics 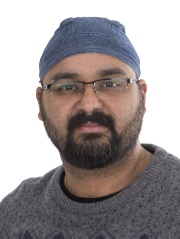 Have you ever wondered how the internet worked or how to download 600 movies in a second? Look no further than Gettysburg College’s own Mara Auditorium! On Monday morning, Professor Balpreet Ahluwalia’s from the Arctic University of Norway presented his X-SIG seminar lecture on electronics and photonics. Don’t let these technical terms scare you, the concepts are quite simple.

Ahluwalia described electrons to electronics as the equivalent of photons to photonics, or in other words, the controlled flow of photons (aka light). This flow of photons in photonics, unlike electrons in electronics, cannot be controlled by the means of conventional material conductors, like copper wire. This inability is caused by the photon’s lack of mass and charge making it seem impossible to harness their flow, but the photon still has momentum which can be manipulated to direct their movement. To control the direction of light through momentum therefore requires the use of reflection and refraction of the photons.

We have all seen our image reflected by a mirror and the refracted light from glass lenses focusing light and aiding bad vision so one would assume that this would be an effective means of controlling the path of light. Though these methods involving mirrors and lenses are successful in controlling the path of light, they very inefficient and lose a significant number of photons to reflective loss — enough to render them ineffectual on a large scale. To increase efficiency of reflection and refraction of the light, Ahluwalia proposed the use of optical fibers which, through the use of refraction through a glass wire, can effectively transmit photons with little loss of strength.

So, we can efficiently direct light with wires. What is the importance of this? It turns out, photonics can very rapidly transmit information. 101.7 terabits of information per second, to be exact, which is much larger than the average 18.7 megabits per second of internet in the United States. With this rate of information, one could download about 600 movies per second or download the entire iTunes store in just three seconds through the use of photonics.

So, what is holding us back from making the great transition to photonics? The answer is that we simply do not yet have the proper tools to convert the energy and information transmitted by photonics to a form that can be used in modern electronics. Unfortunately, it turns out that we cannot create a flow of electrons just by shining a bunch of light on a wire. So, for now, we still have to watch buffering screens and the slow progression of downloading bars, but maybe someday, these pains of the first world will be something of the past.