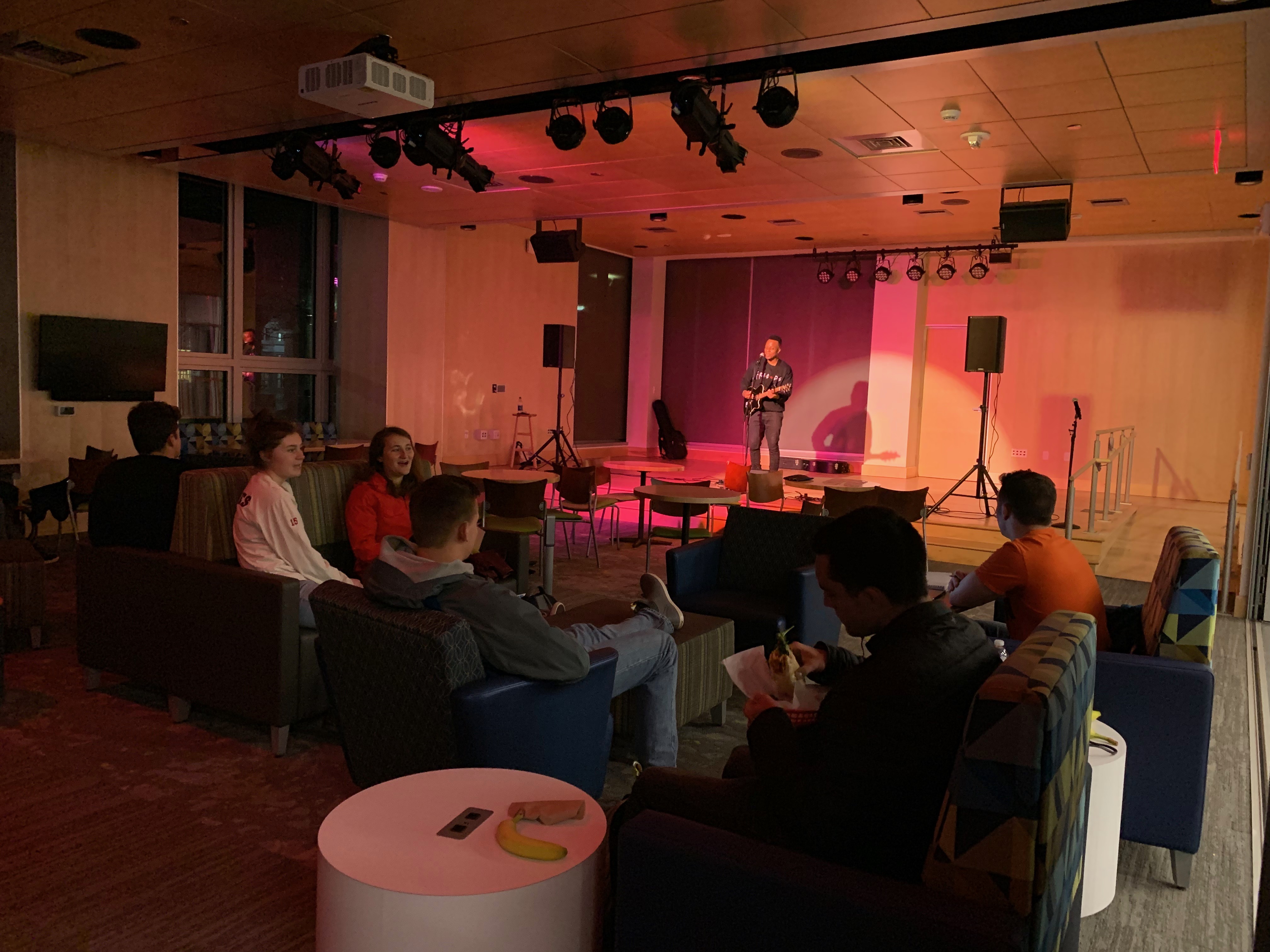 Nelly’s Echo, a singer/songwriter from Baltimore, performed a setlist of original and cover songs in the Junction Thursday evening  (Photo Maddie Neiman/The Gettysburgian)

At 7 p.m. on Thursday, March 22, Baltimorean singer/songwriter Nelly’s Echo took to the Junction stage in the newest installment of the Campus Activities Board’s Coffeehouse Series.

Throughout his hour-and-a-half setlist, Nelly’s Echo entertained his audience with not only his undeniable talent as a musician but also his killer sense of humor and charismatic personality.

Before his performance began, “Nelly,” as he introduced himself, chatted with students Danny Ziegler ‘21, Noah Guy ‘21, and Harrison McCool ‘21. According to Ziegler, Nelly gave advice to Guy, a singer himself. Later in the show, Nelly mentioned that he advised Guy to try out for “The Voice,” NBC’s singing competition show, on which Nelly appeared during the third season.

As he strummed his guitar, Nelly’s Echo sung a hello to the audience.

“Feel free to sing along if you can sing,” he said, then joked, “If you can’t sing, please grab your stuff and leave.”

Nelly’s Echo kicked off the evening with a soulful rendition of Leonard Cohen’s “Hallelujah.” He altered some of the lyrics, singing, “I heard there was a sacred chord that Noah played” or “that Danny played,” giving a nod to his new friends in the audience.

After a round of applause, Nelly’s Echo introduced himself officially and said, “My one goal today is this: By the time I leave here today, I’ll leave you guys with enough love and light to last you through the night, or the semester, or maybe even the rest of your lives.”

He carried the themes of love and light through to his next song, a cover of Jason Mraz’s “I’m Yours.” Nelly announced that he would perform the song in Nigerian, but after singing a line or two, he teased, “No, that’s just gibberish. You’re so gullible.”

He continued the song in English and combined it with Bob Marley’s “Everything’s Gonna Be Alright.” Throughout this song and others in his set, Nelly’s Echo continued to ad-lib and joke with his audience.

Not an easy feat on a Thursday evening when essays and textbooks preoccupy the minds of students studying in the Junction, Nelly’s Echo managed to command the attention of the Junction crowd and even drew in passerby.

“I stopped on my way through CUB on accident, and I don’t regret my decision,” said Emily Vega ‘19. “I’m glad I stayed.”

Along with Cohen, Mraz, and Marley, Nelly’s Echo covered songs by Tracy Chapman, Bruno Mars, Walk the Moon, Gnarls Barkley, John Mayer, and Adele, among others. At some points, he called for audience participation.

During a rendition of John Legend’s “All of Me,” Nelly’s Echo asked for help hitting the high notes — a request that Craig Cissel ‘20 fulfilled, singing a high-pitched “all.”

“Somebody call security on that guy,” joked Nelly. “But please keep trying. I believe in you.”

Interwoven with these covers, Nelly’s Echo performed a number of original songs, such as “Mr. Leroy,” his favorite original, which he wrote for a homeless man in Baltimore. Other originals included “If I Were the King,” “Amarie,” and “Goodbye,” a song written for all of his “future ex-girlfriends.”

“I wrote this song for Ariana Grande,” he kidded about “Goodbye.”

The original song, “I’m Cool,” reflects Nelly’s experience on “The Voice.” Although he had a great experience on the show, Nelly realized that he was trying to be someone else and taking himself too seriously because of the high pressure. To remind himself to relax and take things easier, Nelly’s Echo wrote “I’m Cool.”

More of Nelly’s original tracks could be found on the CD that he had available by the stage for whatever price an audience member wanted to give. If anyone wanted to hear more of his music, Nelly’s Echo explained that he could be found on Instagram, Facebook, Twitter, “and Christian Mingle.”

“Don’t tell my fiancée I said that,” he said, again making the audience laugh with him.

“He has great vibes,” said Ziegler, who co-chairs CAB’s Live Music Committee with Noah Guy. “He was able to engage. The funniest, funniest performer I’ve ever heard. He has quite a personality.”

Nelly’s Echo especially engaged the audience when he premiered his newest original song, tentatively called “Hey,” which he only wrote a few days previously. Although he seemed a little nervous to debut the new tune, his audience encouraged him to share it.

He consented but warned, “If it sucks, it’s your fault.”

Catchy and cheerful, the song required audience participation, and the Junction crowd fulfilled their duty.

Again and again, Nelly’s Echo asked for a “Hey,” and the audience followed his lead. If Nelly sang louder, the audience shouted back at him. If he quieted, the audience lowered their own volume.

“I liked that he worked the crowd,” said Meghan Guy ‘21, “and he had a really great voice.”

Cissel agreed, “It was wonderful. I was surprised that he was actually talented. I don’t know what I expected…but I was a big fan. I was really happy with it.”

Bringing an end to the laughter-filled evening, Nelly’s Echo finished his setlist with a rendition of Bill Withers’s beloved “Lean on Me.”

Before packing up to leave, Nelly’s Echo thanked the sound and lighting crew, the audience, and his new friends Ziegler, McCool, Grace Bushway ‘21, and “Mr. Grace,” also known as Will Durham ‘21.

Throughout the evening, Nelly’s Echo had joked with Bushway and Durham about their ambiguous couple status.

Bushway, a member of CAB, remembered, “I first saw [Nelly’s Echo] at [The National Association for College Activities]…which is the campus activities board regional conference in Buffalo. Timmy Wilson and I saw him there, and I was like, ‘He needs to come to Gettysburg.’ And I’m really happy that he did because I was sitting here literally cracking up the entire time. I mean, it’s always really fun when you can interact with whoever’s on stage, which is why I sit in the front because you never know. It was just hysterical.”

Durham seemed to agree, laughing when he recalled being called “Mr. Grace.” 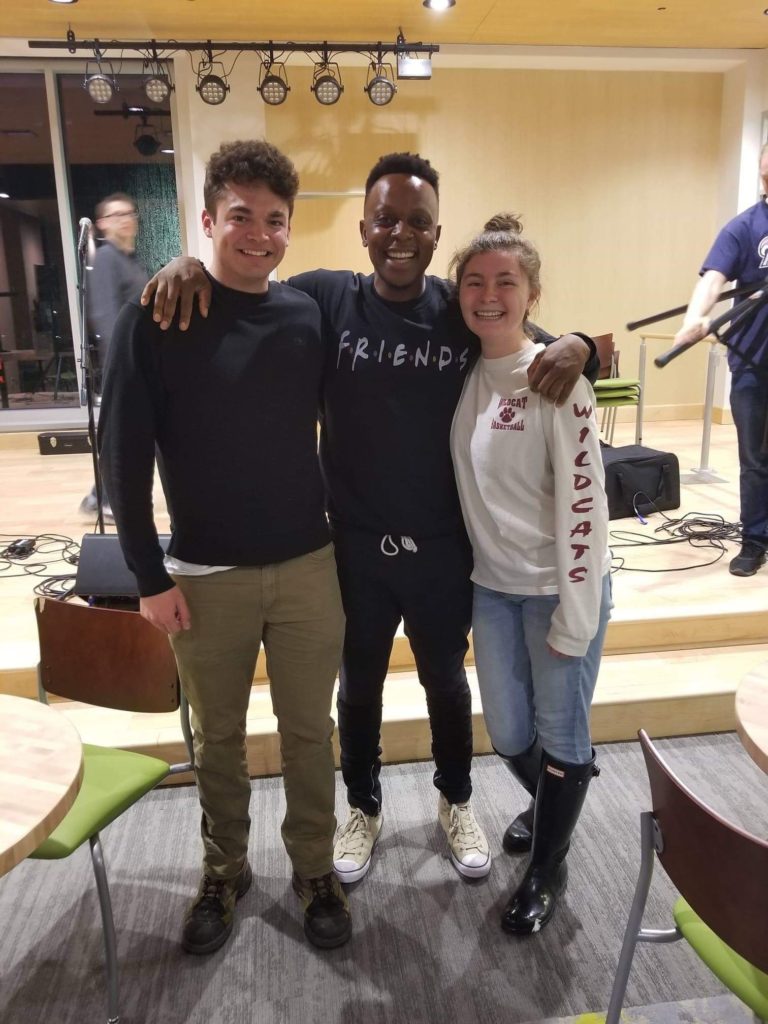 After the performance, when Durham and Bushway admitted to Nelly’s Echo that they were dating, he cheered and, realizing that the combination of their first names echoed the popular sitcom Will & Grace, laughed at the coincidence, especially since he was wearing a F.R.I.E.N.D.S. sweater for the performance.

A personable, comedic entertainer and gifted singer/songwriter, Nelly’s Echo seemed to succeed in his goal of spreading “love and light” to Gettysburg students. Even on a rainy Thursday evening, Nelly’s Echo raised students’ spirits through his music and his contagious happiness.