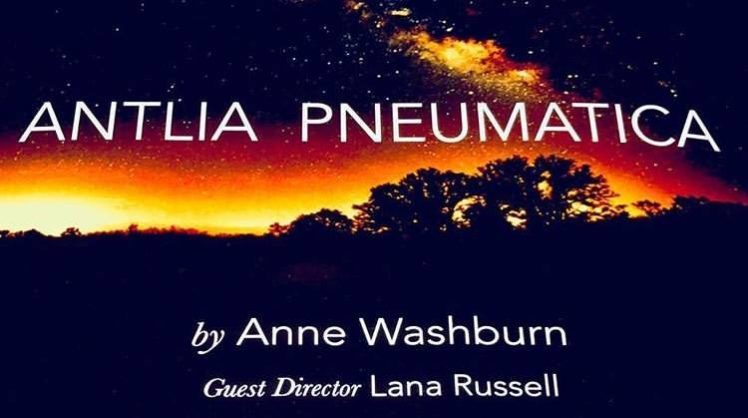 Antlia Pneumatica is a newer play written by Anne Washburn about a group of friends that are brought together again after years apart, for the funeral of one of their friends they had all fallen out of touch with. This play was confusing and slow in the beginning. Although it did pick up pace, it did not get any clearer as to what exactly was going on.

However, the acting was lovely, especially by the kids of the character Nina (Daphne Ellis ’19): Casey (Katie Cona ’21) and Wally (Brian Buechele ’22). The pre-show bit where the two are fighting and playing was really amusing to watch. Although it was hard at times to believe Buechele was playing a seven-year-old because of his height, I found it very entertaining and he played the part very convincingly. There were some scenes that were a bit dry and did not feel natural, but that’s to be expected with an awkward script. However, considering the circumstances in the actual play itself, the awkwardness does come off as more natural than anything. But just being natural doesn’t always mean it’s captivating.

What really stood out was the design. The costumes and set blended perfectly together; the characters’ color pallet standing out enough as to not be lost in the scene, but still making them look like they belong in their surroundings. One character’s wardrobe, Len (Zach de Besche ’22), gave so much insight to the character’s personality just by looking at him in his cowboy boots and button-up with the metal collar clips. An interesting part of the set was director Lana Russel’s instruction to have working appliances on stage. So, as the actors were cooking onions, the audience could smell them cooking in a pan. This really gave an interesting and immersive atmosphere to the production.

With this said, the best part of the entire show was the use of light. The lighting designer, Jon Stiles, created a stunningly starry, dream-like environment for Nina and Adrian (Patrick Lopez ’21) to go out stargazing. This part of the play was rather disappointing dialogue-wise, and yet it was the most memorable part because of the picture it painted around the entirety of Kline Theatre. There were even some lights shining through cutouts in the natural architecture of the theatre adding to the number of uncountable stars that enveloped the audience.

But, with every production, there were some downsides. The biggest problem for me was the dropping of pecans from each of the large pecan trees on both sides of the stage. Not only was the effect lost because the pecans are so small and most of the time the audience couldn’t even see the effect, they used real pecans. This is a big health concern to not only the audience, but the cast and crew. Another unfortunate thing about this play was the fact that the metaphors used could have been beautiful, but they were too subtle for a lot of the audience to catch unless they have really studied the play beforehand, worked on the production intensely, or watched it more than once.

Overall, Antlia Pneumatica was another wonderful production put on by the theatre department and the Owl & Nightingale Players. Although the script was lacking and dry, the actors did an incredible job of creating a natural and awkward atmosphere which fitted the reunion of friends who haven’t seen each other in quite some time. This production’s design was reason enough to come see it more than once and I can’t wait for more interesting shows in the future!

Kathy Scott ’21 intends to major in Theater with a concentration in Theater Design. A veteran of her high school newspaper, she will be involved in The Gettysburgian’s news and arts and entertainment sections. She also plays flute in the Bullets Marching Band and is a member of the swing dance club.