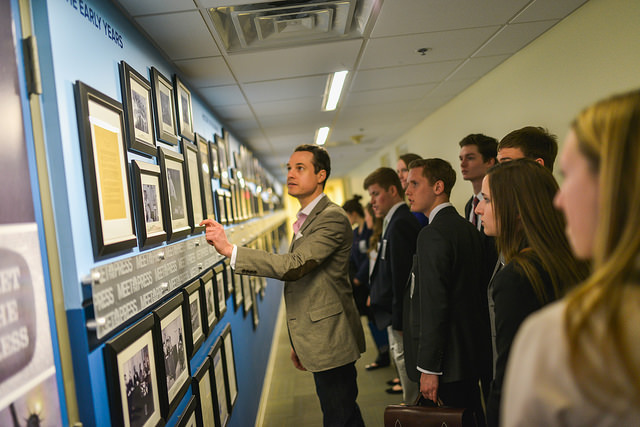 Photo courtesy of The Eisenhower Institute

The Eisenhower Institute will be adding two new topics of study to its spring program: a new and improved “Eisenhower in Gettysburg” and “Women and Leadership.”

In 1918, the same time that Dwight D. Eisenhower was commanding and training Tank Corps recruits at Camp Colt in Gettysburg, the Spanish flu struck citizens of Gettysburg. Professor of History Michael Birkner, who will facilitate the new program along with Professors Ian Isherwood and Amy Dailey,  explained, “[H]e could not have imagined that his greatest challenge would relate to the flu pandemic as it touched down in Gettysburg.”

Once the flu hit Gettysburg, it lasted about two months being the worst from September to October. Birkner detailed, “Eisenhower made it possible for his affected soldiers to get the best possible treatment in local facilities, including St. Francis Church. Dozens died, but hundreds of others who came down with the flu survived to continue their service.”

Eisenhower estimated that approximately 175 soldiers died from the epidemic. During this, while frustrated that he was not overseas in battle, is said to be what eventually led to Ike being a 5-star general, supreme commander, and later president of the United States.

Despite the epidemic, Ike maintained his strong leadership skills and his overall commitment to his country to overcome the flu and keep spirits and energy as strong as he could. While he struggled doing so, by keeping soldiers active and with a strong leader, he gained perspective and experience during a trivial time. Birkner’s final thoughts are as follows: “Eisenhower’s leadership skills had been tested, and he was up to the task. It was a portent of the future.” While Gettysburg seemed to be one of his least favorite times in his military career, it also served as a joyful place for him and his family. Proof of this still to this day, is the Eisenhower house, with a plaque and a historical marker it was the Eisenhower’s’ first family home.

The Eisenhower Institute has been in full force this year changing their programs to be more accessible and valuable to students of the college. Their programs are typically discussion based small groups exploring and diving into a specific area of focus. This upcoming spring semester they will introduce a new and improved program titled, Women and Leadership. The program is designed to develop leaders who will be impacting their immediate surroundings as well as a wider societal group, nation, and even the world. Assistant Professor of Public Policy Anne Douds, who will be directing the program along with Associate Professor of Political Science Kathleen Iannello this upcoming semester believes, “it is a program that encourages contemplative consideration of students’ place in the world and how they can best navigate their lives in leadership.”

The program will detail and explore leadership in many forms, some including: law, business, politics, and even athletics. These forms of leadership will be discussed across all organizational levels in both public and private sectors. The program will host small group discussions guided by professionals in different career paths who have experiences tailored to or knowledge about women and leadership. By allowing students to explore and experience the history of women and leadership, as well as the present realities, students will gain immense perspective and perhaps prepare them for their futures as well. Douds details that the semester long program will foster lengthy and extensive discussions, while also experiencing the topic through a three-day intensive trip to Washington D.C. that will include “meetings with women in leadership at think tanks, businesses, the Pentagon, media outlets, and government, to name a few.”

With a stronger focus on women leaders, the program will also spend time discussing and understanding gender dynamics and organizational culture. Douds explains, “From my perspective, and history has shown, women leaders encounter certain obstacles that are grounded in gender bias. These challenges recur throughout women’s professional and personal lives.   To borrow and mix metaphors, women must navigate a series of glass mazes on their paths to leadership positions and while leading. Some of the obstacles they face are obvious, but many remain invisible until encountered.  Ultimately, it is not about a one-time shattering of the glass ceiling, but rather, a journey that is lifelong, arduous, demanding, but enriching.”

Taylor (Taylor-Jo) Russo '22 is a staff writer for The Gettysburgian who writes primarily for the features section where she covers current events, discussions, and more. She is from Princeton, New Jersey and loves going on adventures and trying new things. She is majoring in Psychology and Philosophy and minoring in Economics. Follow her on Instagram @taylorjorusso.