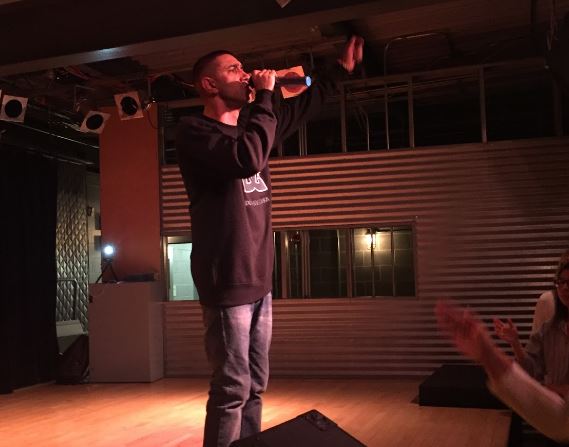 The vibe was relaxed and conversational as everyone sat at tables and around the bar.

Upon taking the stage, Issaa announced that the space was not a classroom, but a club, and prompted everyone to get on their feet and gather around the stage.  Audience members tentatively made their way up to the space in front of the stage as the educational event turned into a party.

Soon after, the audience was captivated as Issaa rapped about the struggles he faced growing up with a father in prison and a mother who constantly worked to support her family.

He also rapped about Rome, his city, and instances of social injustice, prompting change where it’s needed.

Between songs, he spoke about his past and being perceived as Egyptian because his father is Egyptian, despite the undeniable fact that he is Italian by his matrilineal blood and by heart.

Growing up in Rome, his mother did not have the means to buy him instruments so he began using everyday objects to keep the beat and made “poor music, but revolutionary music.

However, his less-than-perfect childhood did not stop Amir Issaa from becoming one of the founders of Rome Zoo, a legendary group of Roman rap artists, releasing several albums, and even rapping on the soundtrack of award-winning movie Scialla!, which landed him a nomination for the David di Donatello award in 2012.

Throughout his performance, Issaa made sure to emphasize that he refused to accept the life he had, and he refused to hone in on one aspect of his life in all of his songs. Instead, the rapper took inspiration from Naz, and later Kendrick Lamar, to create music with a deeper meaning than cars and money.

He aims to educate people about important issues in the world and how everyone can do their part to fix these issues.  He also offers a broad repertoire of his own experiences to display these issues while expressing his values and where he came from.

Despite the language barrier between his Italian lyrics and the majority of the audience’s lack of ability to translate, Amir Issaa’s message of empowerment could be felt, and the energy he brought to the performance created an exciting and fun atmosphere.