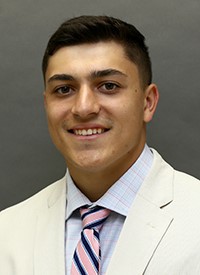 With the first three games of the 2018 football season under his belt, senior defensive back and team captain Mike McKnight has stood out so far in his final season.

McKnight, from West Chester, Pennsylvania, has amassed impressive numbers not only this season so far, but in his Bullet career. During the four years he has played, McKnight has recorded 127 tackles, 12 tackles for a loss, and 10 interceptions in 26 career games.

In addition, McKnight recorded a career-high 51 solo tackles during the 2017 season. This season, he has been building on his success from last year. In last weekend’s game against Dickinson, he recorded a season-high nine solo tackles, with two of them going for a loss.

McKnight’s one interception so far this season was during the season opener against Bridgewater, in which he also recorded give tackles. McKnight also recovered a fumble this year against Ursinus in the second game of the season to go along with four tackles.

With these numbers, McKnight has proven himself an important asset to the Bullets defense and with the season still young, he is poised to contribute more to the Bullets success in his senior year. McKnight will get that chance this weekend as the Gettysburg College Football team will play McDaniel at Shirk Field on Saturday at 1:00 p.m.

Bullet Shot is a weekly feature in The Gettysburgian’s sports section that features a student-athlete who has distinguished himself or herself as a pivotal member of their team. Throughout the season, the feature highlights members each of the college’s teams.