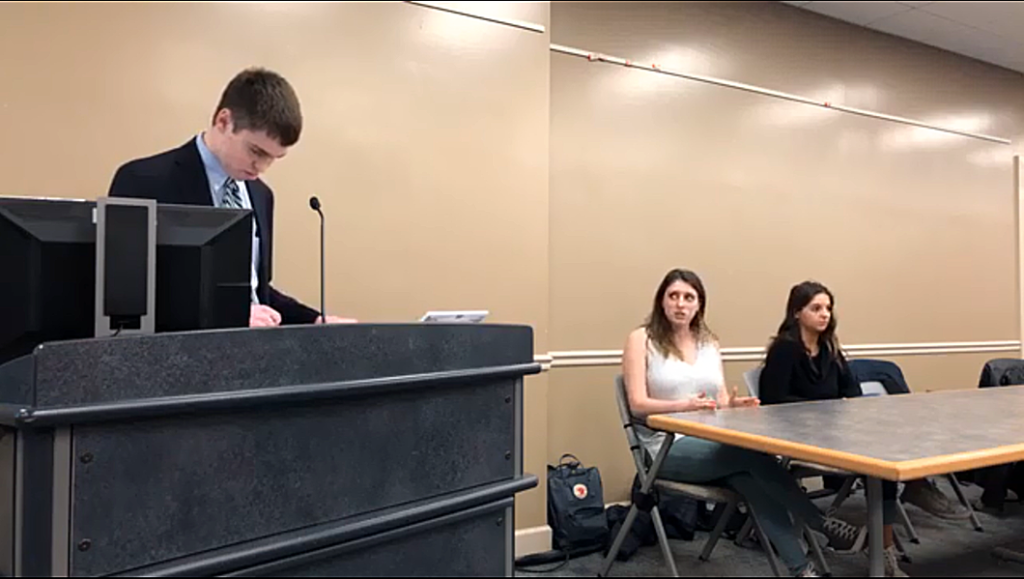 An investigative report released by Bosman said that she found that there was sufficient evidence of voter intimidation to warrant nullifying the elections for president and secretary and calling new ones.

Although Balanda will be allowed to run in the secretary election, which will be held on April 30, Bosman’s decision bars Gluhanich from running in the second election for president.

The Senate’s Constitution grants the vice president unilateral authority to impose penalties for violations of the election rules. However, Bosman convened what she called a “representative group” to decide whether Gluhanich would be permitted to be a candidate in the second presidential election.

That group, composed of senators that are not members of the Board of Directors, which is responsible for adjudicating appeals, and who will not be involved in Senate next semester, unanimously agreed to bar Gluhanich from candidacy.

Gluhanich and Balanda had argued in statements to The Gettysburgian that the term “intimidation” was too vague, and that it was not her intent to intimidate voters. Bosman countered in her report that it was not the intent of Gluhanich’s and Balanda’s actions, but rather their impact that mattered.

“While the term intimidation is open to interpretation, I feel that the impact of an action is more important that the intention behind it,” Bosman wrote. “No one in senate felt that it was too vague when the update to the constitution were passed. Additionally, Haley Gluhanich was part of the group of individuals that made this constitutional change as she sat in Patrick McKenna’s policy committee during this time so she was more than aware of the rule’s existence.”

“However, similarly to the honor code, I feel uncomfortable that you did not remove yourself from the situation immediately when other students started. In that way you were intimidating to the students, by association and by being there…As a result of these actions (and inactions), I feel you were complicit in the breaking of an election rule,” the email from Bosman read.

The email from Bosman also praised the “incredible job” that Balanda has done as a senator over the past year, and implored Balanda to not let this incident deter her from Senate involvement in the future.

Balanda stated to The Gettysburgian last week that “I went with my friend Laryssa [Horodysky, who was elected clubs liaison] to get signatures. Our friend, Haley [Gluhanich], also accompanied us to remind people to vote before the deadline.” Horodysky confirmed Balanda’s account in an email to The Gettysburgian, noting that she did not see Balanda handing anyone her phone and that “neither Marisa nor Haley ever explicitly told a resident to vote for them but rather, introduced themselves.”

Although Balanda was sanctioned even though Bosman found that she did not take an active role in the intimidation, Horodysky was not sanctioned despite the investigation concluding that she was also present during the intimidation (for the purpose of collecting signatures for her petition to run for Clubs Liaison) and did not remove herself from the situation. Bosman defended this decision, stating that “[Horodysky] is allowed to get signatures from students in the way that she did. She did not intimidate anyone into voting and the student who reported the violation expressed that she was comfortable signing the form but was uncomfortable with the actions of the students who were running in the election.”

Ultimately, Balanda declined to appeal the decision. Gluhanich, however, opted to appeal. Senate’s Board of Directors, composed of the executive board as well as the eight committee chairs that are not already on the executive board, will meet in an open session after Monday’s meeting to hear Gluhanich’s appeal. Either the decision will be upheld in full — meaning that a new presidential election will be held by the end of the semester in which Gluhanich is not permitted to run — or overturned in full — meaning that Gluhanich will be installed as president for the 2018-19 academic year.

Gluhanich did not respond immediately to a request to comment.

The report said that the decision to bar Gluhanich from running was made by “an impartial representative group of students who will not be involved in senate next semester.” Bosman clarified in an email to The Gettysburgian that this meant the group was comprised of senior senators and two sophomores going abroad in the fall. The members of the group were seniors Kylee Davis, Ned Hughes, Nick Tarchis, and Donnie Roessler and sophomores Charlie Clewis and Jack Lashendock. Bosman also asked Andeulazia Hughes-Murdock ‘18 to be involved but she could not attend the specific meeting time.

Bosman said the group was given the report ahead of time and there was lengthy discussion on the matter. Gluhanich did not request to and was not permitted to speak before the panel, but Bosman said that she would have the opportunity to speak at her appeal Monday evening.

The power rested solely with Bosman as vice president to decide the sanctions in this matter, but she said the she decided to convene the ad hoc group to make this particular decision because she wanted to make the decision as fair as possible.

“I made the decision to form this group because I felt that just because I constitutionally have the power to make any decision I want to regarding this matter, it is extremely important to me to make sure that the decisions I make are fair and echoed by the students I represent. I thought this would be the most fair way to make this decision and these students were hand picked by me, as this is my decision ultimately, to be the most unbiased representatives of senate possible,” Bosman said.

The investigation began on April 9 when Bosman received a report from a first-year student that three women had knocked on her door a few days prior asking her to sign a petition form and to vote in the election. On April 15, an emergency meeting of Student Senate’s current executive board to discuss the report. The next night, after the Senate meeting, the executive board met with Balanda and Gluhanich to discuss the allegations. The Gettysburgian released a report last week in which four first-year residents of Paul Hall claimed that they were handed a phone by either Gluhanich or Balanda and asked to vote. Accordingly, Gluhanich will only be barred from being president in the upcoming year. She is still eligible to be an affinity group leader, for example.

According to Article IV, Section 4, point A-6 of the Student Senate Constitution, “Candidates may not intimidate students while they are casting their ballot.” This article was amended in March of 2018 as part of a package of revisions to the election rules. Previously, that clause said, “Candidates may not be around or intimidate students while they are casting their ballot.” Because senators—including candidates—were required to staff tables around campus with laptops to encourage higher voter turnout (630 people did vote, which Bosman described as a significant increase from past years, although previous numbers were not available) the provision regarding candidates being present was removed, according to Pat McKenna ’20, Senate Parliamentarian and Policy Committee Chair.

At the April 16 meeting with the executive board, Gluhanich and Balanda did admit to walking through first-year residence halls with Horodysky on the evening of April 6, the report said. Balanda told the executive board that, while in the residence halls, she never knocked on a door or handed anyone her phone, but did introduce herself if the person they were talking to did not know her. The report said Horodysky and Balanda returned to their rooms around 9:00 p.m. when Horodysky had collected enough signatures. Gluhanich moved on to East Quad at that time.

Bosman’s report includes a summary of voting data from 7:00 p.m. to 10:00 p.m., when the incident occurred. She characterized the data as “a drastic shift from earlier voting trends in the election process.”

Gluhanich’s appeal is scheduled to take place during an open session of the Board of Directors to follow Monday evening’s Senate meeting, which will be livestreamed on The Gettysburgian’s Facebook page. No specific timeline has been released for the new presidential election.

Bosman’s full report is available to read here, or embedded below: