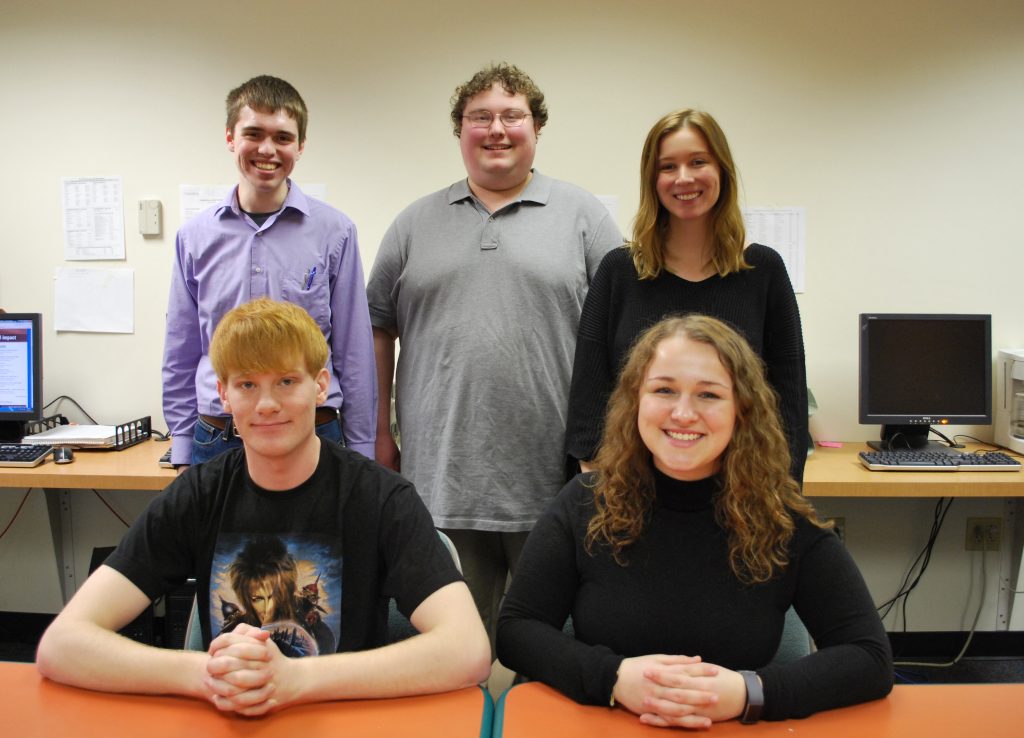 The winners of the Pennsylvania NewsMedia Association’s Student Keystone Press awards pose for a photo in The Gettysburgian’s office in the basement of Plank Gymnasium at Gettysburg College. The winners are: front row (L-R): Charlie Sternberg, Samantha Hann; back row (L-R): Benjamin Pontz, Jamie Welch and Daniella Snyder. Not pictured: Joshua Wagner.

The publication’s coverage of Robert Spencer’s May 2017 visit to Gettysburg College and related events including a solidarity rally and a lecture by Dr. Todd Green won first place for ongoing news. Staffers Benjamin Pontz, Joshua Wagner, Daniella Snyder, and Jamie Welch contributed to the seven articles, two videos, and dozens of social media posts that won the award.

A music review of “Sketches of Brunswick East” by King Gizzard and the Lizard Wizard published in September 2017 received honorable mention in the reviews category. Staff Writer Charlie Sternberg authored the review, his first of many over the course of the semester.

“These awards are a testament to The Gettysburgian‘s commitment to delivering accurate and insightful reporting to the campus community,” said Jamie Welch, editor-in-chief. “When you read one of our articles, you are reading the product of hours of research and fact-checking. I am delighted that the Pennsylvania NewsMedia Association has recognized the hard work that our staff writers and editors put in every day to deliver the news.”

“Winning top honors for ongoing news coverage is a tribute to The Gettysburgian‘s 120-year legacy as the premier student news publication of Gettysburg College,” said Benjamin Pontz, managing news editor. “This honor will only strengthen our efforts to pursue campus stories with vigor, creativity, and integrity. I applaud the work of our entire staff that helped make this recognition possible; it is truly amazing what can be accomplished in people’s spare time.”

The Gettysburgian has been the official student newspaper of Gettysburg College since 1897. Publishing biweekly in print and continuously online and via social media, the organization boasts a staff of more than 50 regular writers and contributors representing a variety of academic disciplines across campus.