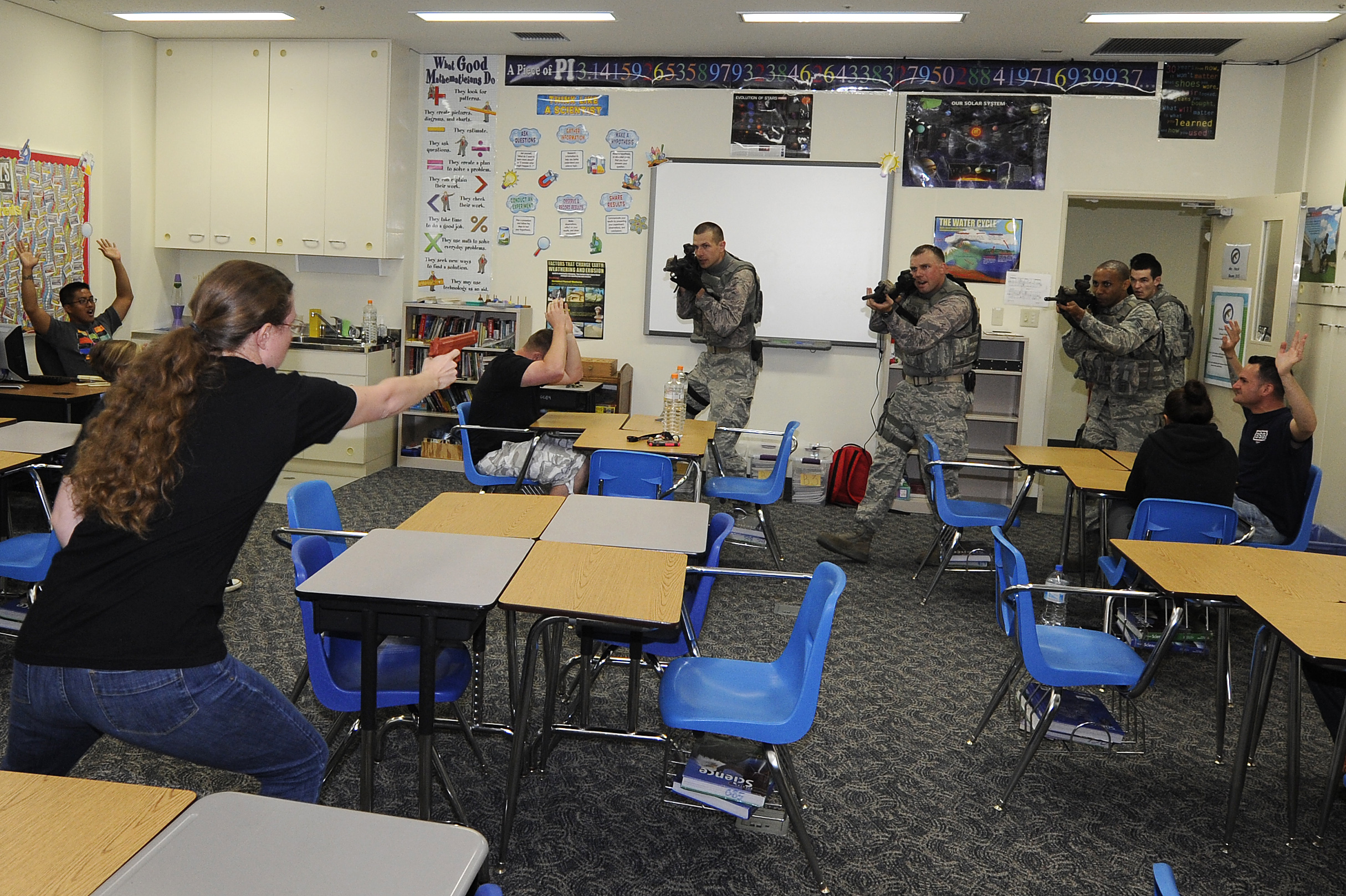 The tragedies of the Florida school shooting have left many people nationwide up in arms about firearms. A few months after the five-year anniversary of the Sandy Hook shooting, it seems to many people as though not much has changed. Once more, many students of all years have begun to consider the cataclysm as if it had occurred inside their own schools, inside their own halls and classrooms.
It can be a terrifying thing, going to school after you hear about something like this. Some people argue that school, which should be a safe haven for education and personal growth, has become a ticking time bomb for students. School safety drills, which once were deemed by many as silly, 99%-never-going-to-be-necessary, at-least-we-get-out-of-class, adjusted-bell-schedule activities, are now something of necessity, because gun violence is occurring every day. This article is being written at 5:44 p.m. on Feb. 19, 2018 and, as of this very minute, there have been 7,247 reported gun-related incidents in 2018, with 2,000 gun deaths, according to Gun Violence Archive.

While government officials are forced to rethink our current gun laws, administrative staff of schools across the country are educating their students once again of their protocols in the event of such a thing.

Below is Gettysburg College Department of Public Safety’s protocol regarding an active shooter on or near campus:

The Executive Director of Public Safety or their DPS or CERT Designee (see list of CERT members identified within the annual report) may initiate the college’s emergency mass notification processes during extremely violent or hazardous incidents that pose immediate danger or threat to the health and safety of campus community members wherein Public Safety personnel need to notify campus community members immediately in order to reduce the likelihood of casualties or injuries.

Immediate notification to the campus about a confirmed seriously violent or extremely hazardous incident or dangerous situation involving an immediate threat to the health and/or safety of students or staff occurring on the campus or near the campus can be accomplished through a variety of communications methods, but the use of the emergency cellphone text/voice messaging, all campus email, and/or alert siren would be seen as the most common and quickest form of communications under these circumstances. Confirmation typically involves the response and assessment of DPS officers, college officials, local police, or emergency responders. As previously stated, notification will occur for these types of incident situations as described unless the notification will compromise efforts to assist a victim(s) or contain, respond to, or otherwise mitigate the emergency.

In the event of an emergency, an effective campus-wide communications process is vital in order to provide the greatest safety possible for the campus community. As part of its Emergency Management Operations Plan, the College has adopted a formalized procedure for issuing emergency alerts to the campus community. When on-duty Public Safety officers become aware of a situation which may warrant the issuing of an emergency alert, the on-duty Public Safety officer confirms (through response, investigation, or collaboration with emergency responders) that there is a significant emergency and then immediately contacts the Executive Director of Public Safety or their designee, who quickly evaluates the situation to determine if an alert is warranted, the content of the notification message and the appropriate segment or segments of the campus community who will receive the notification. In situations where an imminent threat is present, the Executive Director of Public Safety or their designee has the ability and authority to issue an alert without delay and without further consultation with any other College official.

In situations lacking the presence of an imminent threat, the Executive Director of Public Safety or their designee consults with the Vice President for College Life and Dean of Students and/or other members of the Campus Emergency Response Team (CERT) prior to an alert being issued. The College, based on the judgments of members of the Public Safety Department and the CERT team will endeavor to immediately notify the campus community (or appropriate segments separately and distinctly impacted) upon the confirmation of a significant emergency or dangerous situation involving an immediate threat to the health or safety of students or staff occurring on or near the campus. A threat is imminent when the need for action is instant, overwhelming and leaves no moment for deliberation. Such situations may include, but are not limited to: a hazardous materials incident requiring sheltering in place or evacuation, an active shooter on or near campus, or a shooting incident on or near the campus. Follow-up notices/communications will be provided as necessary during an active incident and may be provided by the Executive Director of Public Safety or a member of CERT. When a threat is neutralized or effectively removed, campus community members will be appropriately informed via all or some of the aforementioned communications methods.

When the emergency mass notification system (EMNS) is activated using the siren, email and cell-phone text/voice messaging, college officials will notify campus community members of the emergency situation, its exact location, and will most likely request community members to protect themselves by evacuating the affected area if it is safe to do so and/or by employing the “shelter-in-place” concept. Local police, emergency responders, officials at the Lutheran Seminary, and select borough officials are also alerted via text messaging of any actual on-campus emergency that poses a threat to campus and/or the immediate local borough community.

“Shelter-in-place” means to take immediate shelter wherever you happen to be at the time of a “shelter-in-place” notification – in campus housing, in privately owned housing near campus, in an academic or administrative building, etc. Community members should remain in a “shelter-in-place” status until the emergency response personnel communicate otherwise via an emergency rapid communications system(s). College authorities may instruct campus community members to “shelter-in-place” if a condition exists that is potentially life-threatening and has an immediate threat to the health and personal safety of the campus community. Immediate threats would include, but are not limited to: active shooter incidents, mass violent acts, tornadoes, terrorist attacks and hazardous materials incidents.”

How to Shelter In Place

In light of recent events, Bill Lafferty, Executive Director of Public Safety, spoke about the safety procedures and its adoption of the FBI’s Run-Hide-Fight:

“Gettysburg College’s Department of Public Safety (DPS) adopted the FBI’s Armed Intruder training and philosophy of “Run-Hide-Fight” several years ago in response to the FBI’s proactive study of active shooter incidents within the United States since the year 2000. Armed intruder incidents can vary significantly and providing our campus community with information and knowledge that they could use to enhance their safety during such incidents is a priority. “Run-Hide-Fight” allows our community members to make decisions about evacuating or sheltering depending upon the context of the incident that presents itself. Evacuating when safe to do so and sheltering in place when unable to evacuate seem to be the most logical responses during an active incident. DPS provides “Run-Hide-Fight” training during first-year orientation and they offer classes each semester as open community sessions for anyone interested. DPS also employs this training in its emergency operations procedures and planning.
For the last several years, DPS has partnered with and worked closely with local law enforcement agencies, the State police and applicable federal agencies to develop protocols for responding to emergency incidents on our campus. This includes joint training, information sharing, and collaborative plan development. Members from local emergency agencies also actively participate on at least an annual basis in the college’s emergency operations training.

In addition to establishing a reactive response plan, the College has worked over the course of the last several years to enhance its proactive response to such concerns/issues. Following the tragedy at Virginia Tech, the college reviewed and adopted many of the recommendations from the State of Virginia’s final report/audit of that tragedy. We have provided several physical security upgrades that include; emergency phones, additional exterior lighting, access control and closed circuit television cameras. We implemented an emergency mass notification system that now includes text messaging, alert sirens, and audible warnings in some campus buildings. These redundancies were established to enhance rapid and immediate communications to our campus community in emergency situations. We have enhanced our behavioral threat assessment processes and continue to provide annual emergency operations training for our campus emergency response team; which includes the President and President’s council, as well as key department leaders throughout the institution. This training, external partnerships with key law enforcement and emergency responders and enhanced training and certification of DPS officers has improved our patrol and response capabilities. Just as we need to develop clear response protocols, we believe strongly that proactive prevention needs to be a primary focus.”