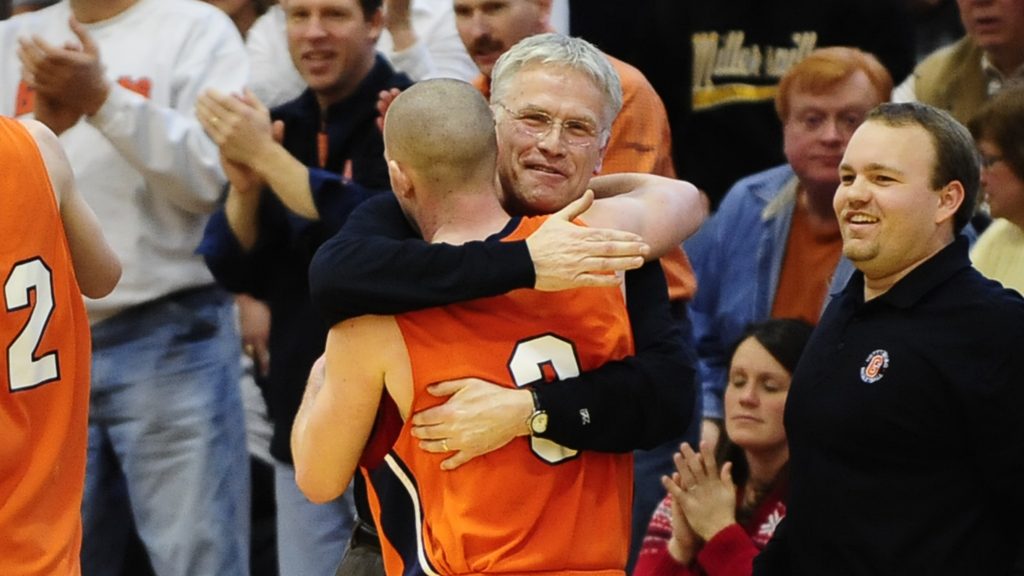 The Gettysburg College men’s basketball team finished off its season Saturday with a 77-60 loss against Ursinus College in Collegeville, PA.

The Bullets kept it competitive with a five-point, 39-34 deficit at the end of the first half.

In the beginning of the second half, however, Ursinus completed a 21-7 run on the Bullets and did not relent from there.

Sophomore guard Nick Antolini led the Gettysburg team in scoring with 17 points totaled during his 32 minutes of play. Antolini went 6-12 from the field and 4-7 from beyond the arc.

Senior forward Matt England scored 14 points and reeled in 11 rebounds during his final game in a Bullets jersey. England earned his seventh double-double of the season and a Centennial Conference best.

This game is the last to be coached by Gettysburg College men’s basketball and head coach George Petrie. Petrie has coached the men’s basketball team for 29 years and the golf team for 24 (he will coach golf this spring before retiring officially at the end of the year).

Petrie’s departure ends a coaching tenure that began with the 1989-90 season and ends with a program best of 396 wins and three Centennial Conference championship appearances (2001, 2002, and 2009). Coach Petrie also led the team to five NCAA Division III Tournament appearances (1996, 2001, 2002, 2008, and 2009), which are the only five appearances in the Gettysburg men’s basketball program history.

With the season now in review, the men’s basketball team went 7-18 overall and 5-13 within conference matchups. The Bullets seemed to have particular trouble with road games, as they posted a 2-9 record away from Gettysburg.

The men’s team averaged 62.1 points per game along with 14.1 assists and 34.4 rebounds per game. The team leader in points was Antolini. Antolini scored 267 points in total with an average of 10.7 points per game during the 25 game season.

In terms of rebounds, England grabbed 193 rebounds over 21 games with an average of 9.2 per game.

Sophomore guard Danny Duffeyy led the team in assists with 95 total and an average of 3.8 assists per game.

A source of the Gettysburg team’s struggles this season can be linked to its rate of turnovers. Its turnover ratio of 16.1 per game is significantly higher than its opponents’ 11.9 clip.

Silver linings are present, however, as the team’s assists and rebounds per game were similar to most opponents during the 2017-2018 season.

The team as a whole was young this season. Of the 18 members, 13 were either first years or sophomores.

Senior forward and team co-captain Cameron Stewart commented on the team’s youth in an interview with Braden Snyder of Gettysburg College Athletics: “We’ve had a young team similar to last year which is a good thing,” said Stewart. “Our players got experience and playing time that allowed them to develop their game.”

As Stewart suggests, the youth of the basketball team leaves room to hope for better fortunes for the team as they continue to develop over time.

In the same interview, junior forward and co-captain Matt Palacio discussed what his role would be as he would now be a upperclassmen on a younger team; “It is important to have another voice on the team in addition to the coaching staff, to keep it fresh on the court and have everyone play to the best of their ability on the court to help keep everyone on the same page.”

Palacio will have the opportunity to continue to play this role in his senior 2018-2019 season.

There has yet to be an announcement who will be replacing Coach Petrie next season.