Home » News » The Gettysburgian Will Host Panel on Investigative Journalism

The Gettysburgian Will Host Panel on Investigative Journalism 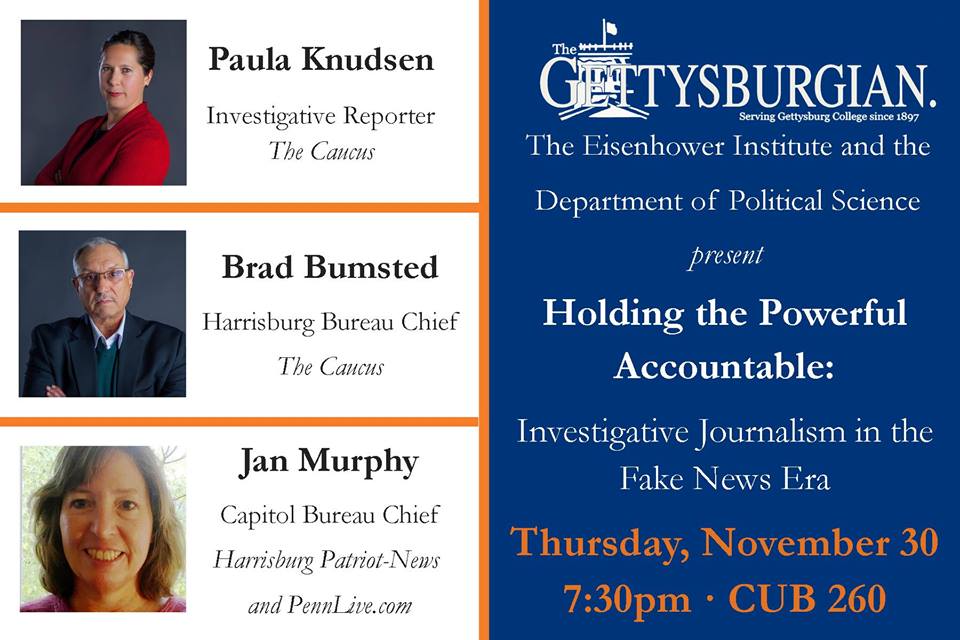 How has journalism changed in the era of the 24 hour news cycle and a cutthroat environment for “scoops”?

Has there been a trickle down in hostility towards journalists during the “fake news era”?

Where is journalism going from here?

This Thursday, November 30, at 7:30 p.m. in CUB 260, The Gettysburgian will host three distinguished reporters to answer these questions and more in a panel discussion entitled “Holding the Powerful Accountable: Investigative Journalism in the Fake News Era.”

After an opening discussion moderated by Benjamin Pontz ’20, Managing News Editor for The Gettysburgian, members of the audience will be able to submit questions.

The event, which is co-sponsored by the Eisenhower Institute and the Department of Political Science, is free and open to the public.

The panelists are listed below:

Brad Bumsted is the Harrisburg Bureau Chief for The Caucus, a state government watchdog publication of LNP Media Group, which is based in Lancaster, Pennsylvania. The author of multiple books on government corruption in Pennsylvania, Bumsted’s career in journalism began in 1974 and he has won numerous state and national prizes for his investigative reporting. From 1998 until 2016, he covered the state capital for the Pittsburgh Tribune-Review, and he helped to found The Caucus last year. He regularly appears in local media across the Commonwealth to discuss state government.

Paula Knudsen is an investigative reporter for The Caucus who previously served as director of legal affairs for the Pennsylvania NewsMedia Association. An adjunct professor in the Elizabethtown College Department of Political Science before joining The Caucus, Knudsen has spoken around the Commonwealth on civil and constitutional rights to audiences including high school, college, and law students, attorneys, and the general public. She has also served as a guest lecturer at the Dickinson School of Law and Widener School of Law.

Jan Murphy is the Capitol Bureau Chief for the Harrisburg Patriot-News and PennLive.com. She focuses her reporting on state government and higher education policy specifically in state and state-related institutions. A past president of the Pennsylvania Legislative Correspondents Association, she has worked with reporters from across the Commonwealth in the Capitol newsroom for more than two decades. Currently, in her role with a digital-first publication, she turns around stories almost every day on issues of state government.

This event marks the first panel The Gettysburgian has hosted, but Pontz hopes it will not be the last.

“We are beyond thrilled to have three journalists of this caliber joining us to discuss a topic that is timely and of great significance given today’s political landscape,” he said. “We anticipate this being the first of many conversations facilitated by The Gettysburgian. We want to leverage our role as a platform for open dialogue whether it is online, in print, or in person.”