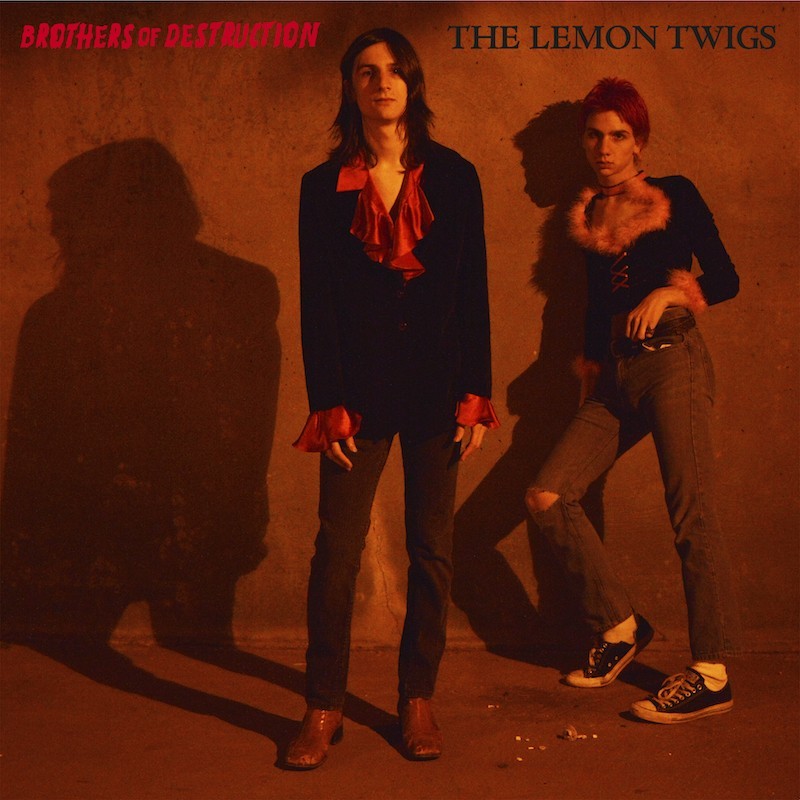 Brothers of Destruction is the latest release from the Lemon Twigs, and it is the first new music they have released since their debut album, Do Hollywood came out in 2016. Brian and Michael D’Addario are only twenty and eighteen years old, but their music draws on a vast and eclectic range of musical influences and successfully synthesizes them together into something undoubtedly born from the past while still managing to sound thrilling and new. On Do Hollywood they showed off complex arrangements, fun songwriting, and the ability to write tunes that stick in your head. They take inspiration from the sounds of classic rock from the sixties and seventies and morph it into their own distinct brand of music. Since the success of Do Hollywood, everybody has been wondering where the Lemon Twigs will go with their sound next.

Brothers of Destruction is not the next big evolution of the band; it is more like a stepping stone between the Do Hollywood era and whatever full release will come next. It was recorded at home by Brian and Michael D’Addario shortly after Do Hollywood was completed in 2015, and the songs were all written at the same time as their debut album. As a result, these songs come across like a continuation of the same sound, with a few exceptions. It makes sense that they would want to release the last songs of their Do Hollywood era before moving on to less familiar material, but this release might be a let down for people who want to hear the band move on. On the other hand, Brothers of Destruction will excite fans who now have six more songs to hold them over until the band releases their sophomore album, presumably in 2018. The production here is serviceable but it’s lacking some of the subtle depth and dynamic contrasts that Jonathan Rado of the band Foxygen was able to bring to their best songs on Do Hollywood, which he produced for them. These criticisms may come across as harsh, but the Lemon Twigs have set the bar high for themselves.

Despite its flaws, Brothers of Destruction is anything but a boring or lazy cash grab. On the contrary, this collection of songs is characterized by the group’s loving attention to detail and fine tuned ear for interesting instruments and expressive lyricism. The music does not break too much new ground, but the band is damn good at what they do and it is a pleasure to hear them in their craft. Brian and Michael write their songs independently of each other before they share and record them, therefore they trade lead vocals and drums on most songs. My favorite song from Brian D’Addario on this release is “Beautiful.” The song comments on the grandness of the natural world around us. While the scale of our short little lives in the endless span of universe may make us feel insignificant in the grand scheme things, the lyrics are anything but depressed or defeated. Brian sings, “I am nothing / I’m no one / It’s wonderful”. If life is meaningless, then we are free to shape our own destinies and create meanings for ourselves. The instrumentation here is thin; gently plucked guitar serves to leave Brian’s voice exposed and make him sound vulnerable. As the song progresses, instruments are slowly added until it builds up to a full climax with bass, percussion, and trumpet.

My favorite song from the EP is “Night Song” which was written by Michael D’Addario. This song is the biggest departure from the band’s usual sound, featuring some truly strange sound effects and a danceable beat. Lyrically, Michael’s sense of humor comes through distinctly here. Imagery of throwing things on the floor at the grocery store as well as a reference to the canadian interviewer and musician Nardwuar evoke a chuckle, but the song takes a really entertaining turn toward the end of the track. Sirens are heard and then the “party police” arrive and start ordering people to do the robot. The song finishes with a comical and exaggerated shootout; I guess somebody pulled an illegal dance move.

Overall, with a runtime of only eighteen minutes, I recommend that you find time to give Brothers of Destruction a listen. The Lemon Twigs are an exciting new band, and we are only just starting to see what they are capable of. I only hope that they continue innovating and bring us somewhere less familiar on their next release.