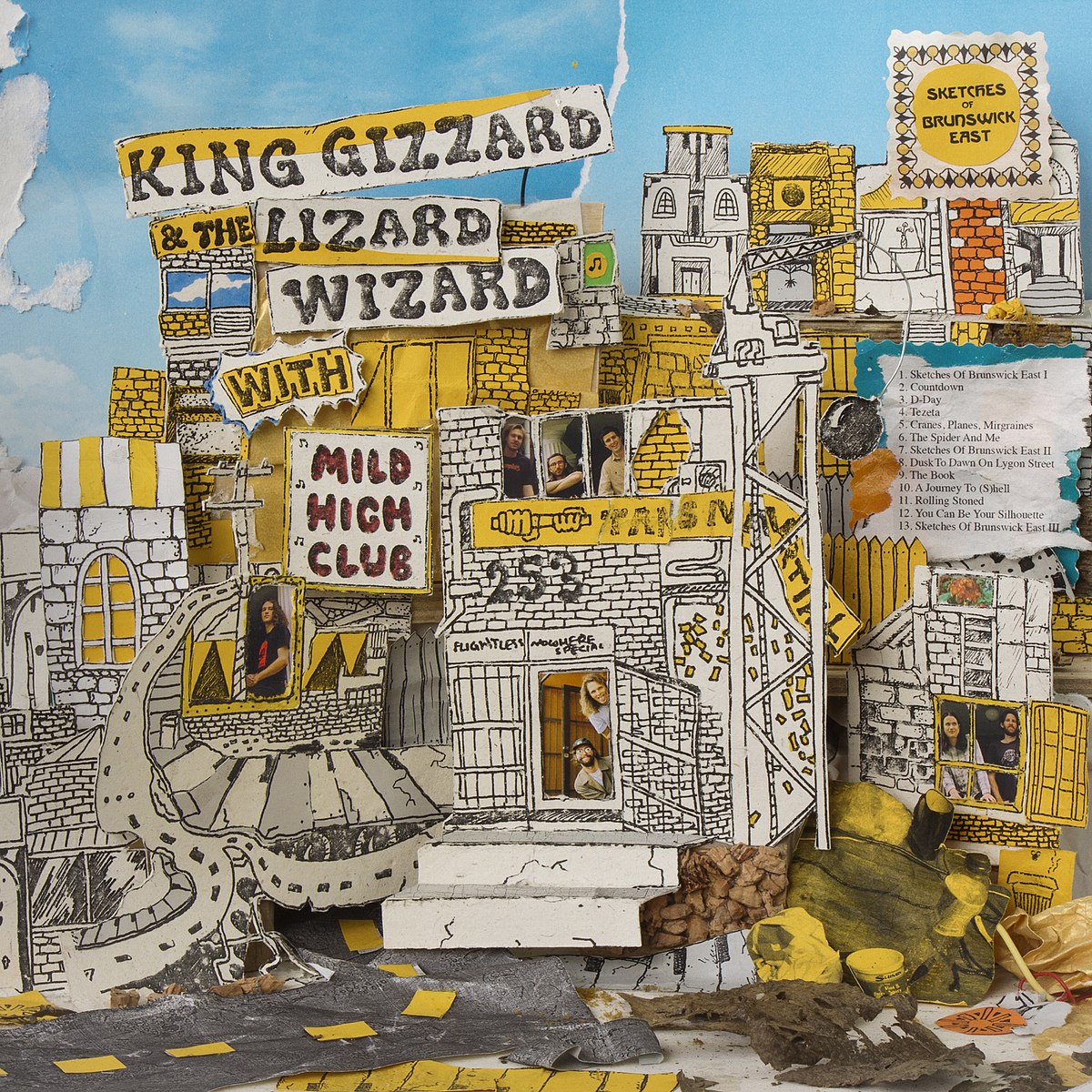 The fertile music scene in Australia has given us many popular and interesting bands in the last couple of years, including Tame Impala, Pond, and the Psychedelic Porn Crumpets, just to name a few, but no group has been nearly as prolific as King Gizzard and the Lizard Wizard. This seven person psychedelic rock outfit from Melbourne has released 11 full-length albums since 2012 and they shocked many fans this year when they announced that they would be releasing five albums in 2017. The first album this year was Flying Microtonal Banana which was followed by Murder of the Universe, and now they have released the third album of 2017, Sketches of Brunswick East.

Sketches of Brunswick East is a collaborative album which was written with Alex Brettin of Mild High Club. It gets its name from an album by Miles Davis, and as a whole it is very jazzy and improvisational in nature. Gone are the screams and heavy riffs that characterized their most popular and recent releases. Sketches slows down the pace and focuses on small everyday life as opposed to giant concepts about the the universe. While the band had briefly delved into some jazz-influenced music in the past on the song “The River” from Quarters!, this album is distinct from that in how it presents itself. The vocals on Sketches are light and playful. Melodies are floaty and fun, with one song often drifting into another song with no break in the middle. The album does a good job in painting a picture of Brunswick East, the suburb in Australia where the band does much of their recording and has their headquarters. With subtle sounds embedded in the music, such as trains in the distance, dogs barking, birds chirping and children playing, you really feel immersed in the sounds of the city. Flute melodies feel free and the rhythms are laid back. In the past, the band has been known for having aggressive songs that are constantly driving forward without stopping, but here they are not afraid to just sit back and let songs flow. This makes the album stand out in their discography as a truly unique experiment, but it is also a flaw. Often, the songs are too relaxed and seem to go nowhere before transitioning into the next song. Some songs feel like incomplete ideas that were not developed as much as they could have been. The album is rather short, with a run time of 37 minutes, but it feels much longer as a result of its meandering quality.

Still, there are some good tracks to be found here. A gentle keyboard solo towards the end of “Countdown” descends into an eratic solo with staccato notes dropping like a gentle drizzle of rain drops. This reminded me of some of the unusual solos from Mild High Club’s last album Skiptracing, in particular the fuzzy guitar solo at the end of “Kokopelli.” Another highlight is the song “The Book” which features the return of the microtonal experimentation that characterized their earlier release Flying Microtonal Banana. To dismiss this song as merely a b-side from that album would be a disservice, because this song really embraced the half-tone scale in a way that expands the experiments of that album. The lyrics explore dark fanaticism and moral certainty from the perspective of a religious fundamentalist.

Overall, Sketches of Brunswick East is a distinct departure from the usual sound of King Gizzard and the Lizard Wizard. Although it suffers from a lack of momentum, the album is a fun effort by the group to take their sound somewhere new. There is no doubt that the group has already moved on to their next project, if it is not already finished yet. Who knows where the group will take us next?