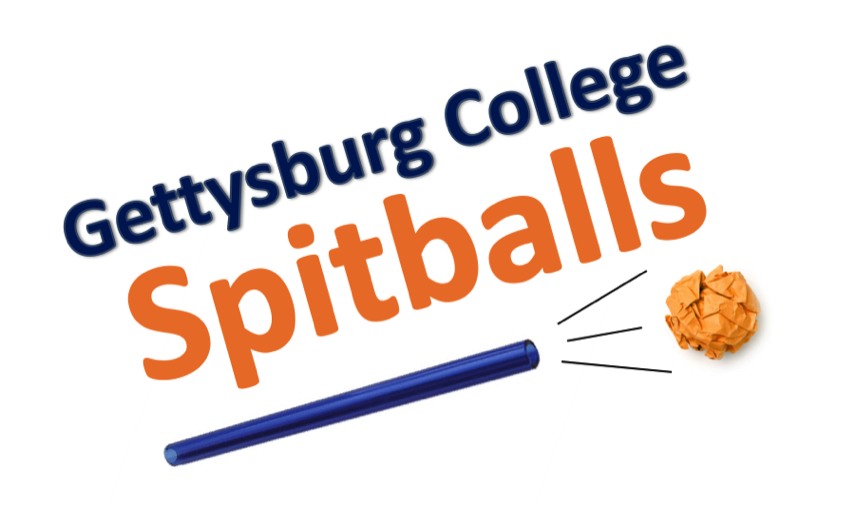 In a nod to political correctness, the Gettysburg College Athletic Department announced this week it is holstering “Bullets” as the nickname for its sports teams.

“The nickname committee shot down several non-gun violence options such as Paintballs, Rubber Bullets, and Blanks before sticking on Spit Balls,” said a member of the nickname selection committee.

The college administration, always ahead of potential controversy, issued a prepared statement: “Our goal with the sports nickname change is to disarm critics of Gettysburg College before we are criticized.”

In recent years several colleges have abandoned offensive or controversial nicknames, logos and mascots, such as Dartmouth College’s Keggy the Keg mascot, and Elon University in North Carolina formerly known as the Fighting Christians.

Not everyone is thrilled with the nickname change. Pitchers for the men’s baseball team expressed concern, pointing out that a spitball is an illegal pitch.

Several students have also joined the debate, arguing that this nickname change is not needed and that the proposed nickname is “ridiculous.”

Senior sports fan and former sports editor Lauren Perry said, “I don’t understand why they are making this change. It’s literally the most pointless thing I have ever heard. No one has complained and who wants to be a fan of the Spitballs!”

Environmental Studies professor Sarah Principato added that the new nickname promotes the blatant waste of paper. Professor Principato said, “I think it’s really nice that they are going with a less violent nickname but the name Spitball encourages the waste of paper. How many fans will now make spitballs at games? It would be much better if we promoted the recycling of paper.”

The nickname change has also drawn national attention. The National Rifle Association took aim at the college’s decision to drop “Bullets” as team nickname by firing off the following statement: “This is an affront to Second Amendment rights by a bunch of liberal arts liberals. It is an unconscionable act by an institution situated on historic hallowed ground where so many bullets helped to spill rivers of blood.”

Not everyone is against the nickname change, though. Sophomore Daniella Synder, who is known to shoot spitballs throughout the library, said, “I think this is great man! Now, maybe I won’t get in trouble for shooting spitballs all over the library. I’ll just say I’m showing my school spirit. Heck, maybe I can get away with this in class now!”

Regardless of campus controversy, the college is moving forward with its nickname change.

In a related move the college announced the Bullet Hole will adopt the name Spitball Wad.

When told of the new name for the popular campus eatery senior sorority sister Amelia Graham remarked, “Eewww. Who wants to eat at a place called Spit? That’s just gross.”

Senior health-science major Carolyn Marcello added a health perspective to the discussion. Marcello said, “Food and spit shouldn’t really go together. Spitballs will definitely contain people’s germs. Think about flue season! Who wants to be at a sports game when some crazy, flue-infected fan shoots a dripping spitball right your way?”

The CUB Bookstore is also trying to get in on the issue, seeing a profit opportunity in the nickname change. Store management has ordered a case of blue straws along with reams of orange paper to bolster souvenir sales during Get Acquainted Weekend.

It appears that this issue will be remain a topic of contention on campus for some time.

The Gettysburgian advises all students to duck incoming spitballs from excited fans showing their school spirit for this new nickname.

Be sure to go out and show your Bullet pride for the remainder of the year before the nickname change takes effect!