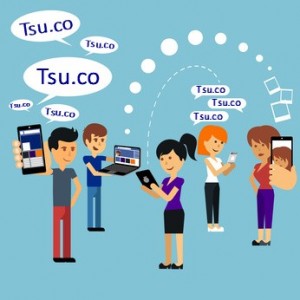 Facebook has removed users’ ability to link to the rival website Tsū, which allows users to keep a share of the ad revenue on their profiles.

It is safe to assume that most people have heard of Facebook, but the majority of people are unaware of Tsu.co, and Facebook wants to keep it that way.

Tsu.co is a new social media site claiming to share 90% of its profits with users, stating that users will receive 45% of profits for posting while the other 45% is shared amongst the community. Users get paid not only for views to their own page, but for views to the pages of members they invited, meaning that there is an incentive to post on Tsu, and to invite others to join and view your and others’ pages. Many users have turned to Facebook and Instagram to do just that.

However, as of September 25, Facebook forbids users to post, or even private message, anything in reference to “Tsu.co.” All previous posts involving Tsu.co have been flagged as “spam” or “malicious content” and thus removed from the site. Because Facebook owns Instagram, this ban also extends to that platform’s posts/comments.

Facebook and Instagram are social media giants that many businesses rely on for advertisements and as a tool to garner attention in this new digital age. Tsu.co reports that before the block, they received about 2,534 visits per day via Facebook traffic; however, after the block this number plummeted to a fast 0. Many people are upset over Facebook’s censorship of Tsu.co, claiming that the company is intentionally trying to stifle a possible competitor.

However, Facebook’s assignment of Tsu.co links as spam may not be as ridiculous as some think. Because of the financial incentives to post about Tsu.co, Facebook feared that users’ newsfeeds would be flooded with Tsu.co links, and this fear was not unwarranted. Tsu.co users began creating fake accounts to boost their page views, and Facebook received complaints about the Tsu.co links, labeling them as spam, which Facebook defines as “sending bulk messages, excessively posting links … and sending friend requests to people you don’t know personally.”

One woman claims that she was devastated when Facebook removed her nearly 7,500 posts and comments related to Tsu.co. If one woman can post 7,500 Tsu.co links, a growing community of Tsu.co users can do a lot more damage.

It is unlikely that Facebook feels threatened by Tsu.co, as its grip on the social media market is remarkably tight, and Tsu.co’s main appeal, the ability to make money off of posts, is faulty, and most users have made scanty, if any, profit.

But the argument remains; is Facebook out of line? Is it growing too powerful, and bordering on creating a social media monopoly? Though Facebook’s qualms with Tsu.co may be legitimate, so are these questions, and the future is certain to demand answers.