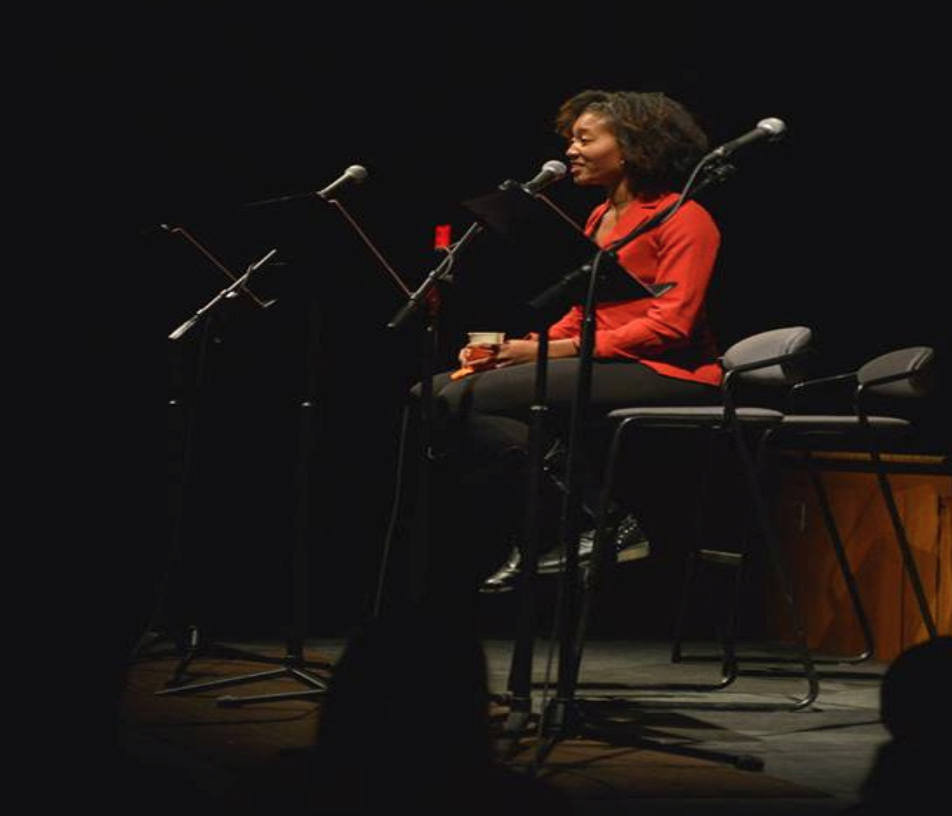 Justina Molokwu ‘17 performs at the 2015 Vagina Monologues, held Thursday and Friday, February 19 and 20 of 2015. (Photo Credit: The Women’s Center at Gettysburg College)

The Facebook event for the Vagina Monologues advertises the show as an “award-winning masterpiece [that] gives voice to women’s deepest fantasies and fears, guaranteeing that no one who reads it will ever look at a woman’s body, or think of sex, in quite the same way again.” This year’s show was especially interesting for me, as I had seen it once two years ago and only remembered small parts of it. I was struck by the performance this time because, seeing it again, I really understood why the performance is so special. The 2015 Vagina Monologues in the CUB Ballroom on Friday night was, in my opinion, even better than it was two years ago.

The proceeds from the event, as well as the proceeds from the prior night’s show, went to Survivors, Inc., an organization in the Gettysburg area that provides aid to women who have experienced domestic violence and sexual assault. Their vision, according to their website, is “An end to domestic violence and sexual assault.” What I took away as one of the main messages of the Vagina Monologues was the desire to promote understanding of a subject that has been, and still continues to be, so taboo in society. Many of the monologues performed, especially toward the beginning of the show, repeat the word “vagina” over and over again, an aspect of the performance that seems to cause a bit of discomfort and giggles in the audience at first.

However, after a few monologues, the word does not seem so odd anymore. I think the Vagina Monologues are really special because they show how something as trivial as being able to say the word “vagina” can help promote understanding and acceptance of a subject that unnecessarily causes discomfort. In this way, the idea to give the proceeds to Survivors, Inc. seems completely appropriate. Survivors, Inc. seeks to promote an understanding of the wrongs of sexual assault and domestic violence by providing aid to victims and bringing the topics to light, just as the Vagina Monologues helps bring an uncomfortable topic to the eyes and ears of the public.

The diversity shown in the monologues was especially interesting and important, as the task of speaking for every person who identifies as a woman with a vagina is not an easy one. At the beginning of the show, one of the cast members described how there were stories taken from African American women, Native American women, Asian American women, white women, lesbian women, transgender women, young women, old women, prostitutes, and many other groups. In “The Flood,” the cast performed a monologue from an old woman, and in “Six Year Old Girl,” the two cast members acted out an interview with a little girl describing what her vagina would wear.

In “The Woman Who Loved to Make Vaginas Happy,” the audience heard a story told by a lawyer who decided to quit her job and become someone women could hire for sex. This was the infamous “moaning” monologue, and the three cast members that performed it were awesome and unafraid of embarrassment or looking silly. In this way, these three women, as well as the rest of the cast members, captured what I think Eve Ensler was hoping to accomplish with the Vagina Monologues. They told stories and celebrated the vagina, even going so far as to take back derogatory terms for it in “Reclaiming Cunt.”

They also brought awareness to topics that are not always comfortable to discuss. In “My Vagina Was My Village” and “The Little Coochi Snorcher that Could,” the cast told stories of sexual assault and extreme violence against women. By bringing these stories out into the open, the Vagina Monologues helps to increase awareness and promote discussion in order to end these issues.