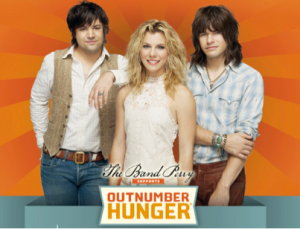 Hunger is a problem that is unfortunately prominent in America today. One in six Americans face hunger in everyday life, adding up to a total of 50 million hungry Americans. To help tackle this problem, The Band Perry has teamed up with the Outnumber Hunger Program, an organization that has already provided over 5 million meals. To help them reach their goal of up to 10 million meals, Gettysburg College has partnered up with organization and the Band Perry in a promotion running from March 19- April 14.

In order to help, Gettysburg College students can choose General Mills products at the dining hall during the promotion dates. Every case of General Mills cereal that is purchased donates $6.25 to Feeding America, an organization that provides food to more than 37 million people a year and has partnered with the Outnumber Hunger Program.

Also partnering with the program is Big Machine Label Group, a record company that features The Band Perry on its list of signed artists. To get students excited about getting involved, Outnumber Hunger is promoting a prize pack giveaway from The Band Perry, including several giveaways and contests. The cause is particularly important to the country music band, which is unfortunately used to seeing the effects of hunger as they tour the country. According to the promotion’s flyer, the band has said, “Traveling as a family band for so many years, we’ve crisscrossed the country by way of small towns. We have seen the struggles so many face on a daily basis and partnering with Outnumber Hunger enables us to bring awareness to this cause by town.”

If you’d like to help out, a link to making a direct donation is available on the Outnumber Hunger webpage. There is also a page where you can check out the sites of the local food banks in the area. Buying specially marked packages of General Mills cereal and then entering the code online can also help, as every code equals Outnumber Hunger donating $0.65, enough for five meals for local food banks. You can also choose General Mills cereals at the dining hall and spread the world to help decrease the amount of hungry families in the local community!